I've recently picked up my (Apple) pencil and started making my own illustrations for my projects, and the response has been surprising.

Before I tell you more, let me tell you how I got here.

Often times for me it was the logo, a banner, or something else that's simple enough. Whenever there were any illustrations they were always taken from some open source illustration project.

Mostly all of my projects were open source, and if there's any reputation for free, unskilled design work then it's that it's, uhh... "modest". 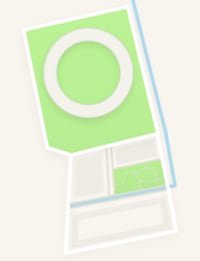 Logo for my open source project "Agloe". Why I thought this is a good logo is anybody's guess.

Warning: product plug ahead, but it gives context

Few months ago, I started working on a personal project of mine.

I read a lot of (e)books and have always wanted a better way to manage my Kindle, Libby, and Apple Book highlights, because:

This led me to create ReadShape, a platform where I could manage all my highlights, whether they're from Kindle, Libby or elsewhere.

Even though you might be building it for the world to use, you still care about it on a personal level and want to nurture it like it's your baby.

One of the decisions I made that ended up giving the product a lot of personality was that of creating my own illustrations for the platform.

In large part inspiration for this came from a fairly unusual place. It came from Linear's README. There's a chapter that they title "Uniform sameness".

As competition intensifies, founders rush to get their products out into the market. Product teams literally work in sprints. Craftsmanship was replaced with growth hacks. It’s not just the software itself that lacks personality; has every tech company hired the same illustrator? Our once so lively dreams have become positively lifeless.

This part particularly stood out for me: "has every tech company hired the same illustrator?"

Even though I imagine that the author is talking about the same style of illustrations seen everywhere, for the sake of this article I'll view it from the angle of people re-using the same few open source illustrations.

In my opinion there's not necessarily anything wrong with using open source illustrations per-se. You might not have the time, skills, or desire to create your own.

Re-using open source illustrations is better than nothing. Assuming, of course, you don't just cram your website with as many as you can thinking it'll make it look better (hint: it won't).

There is a point, however, where all products visually seem like they're morphing together into one.

I've gotten to the point where I can go to practically any new business's website and tell you exactly where they got their illustrations from.

Whenever I found a website that used illustrations I had never seen before, it felt delightful and I immediately wanted to learn more about them. Their illustrations made me take them seriously.

This is what I wanted for ReadShape.

Picking up the (Apple) pencil

Although a daunting idea at first, what calmed me was the thought that even if my illustrations are terrible, at least most people will only look at them for a few seconds.

This led me to create my first illustration ever. I like to come up with stories for my illustrations. Here I imagined it's young Bob Ross reading his favorite book while taking time off from painting happy little trees. 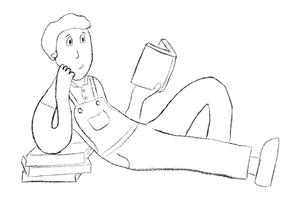 It's still the first illustration visitors see when they visit ReadShape.

This turned out to be incredibly fun. When I was done with it I thought "wow, even if everyone else hates it, at least I love it". The whole process was intrinsically enjoyable.

I didn't expect much of a feedback. I'm not trying to be humble, I really thought no one would care enough to talk to me about the illustrations.

How wrong I was.

Ever since I made those illustrations I've had a surprising amount of people message me inquiring about them and telling me they really like them.

In a world where it's often difficult to get people to care about the thing you're building, it gives some much needed encouragement to keep going.

I hope you enjoyed this article

Once suspended, spectacularsloth will not be able to comment or publish posts until their suspension is removed.

Once unsuspended, spectacularsloth will be able to comment and publish posts again.

Once unpublished, all posts by spectacularsloth will become hidden and only accessible to themselves.

If spectacularsloth is not suspended, they can still re-publish their posts from their dashboard.

Once unpublished, this post will become invisible to the public and only accessible to 🦥.

Thanks for keeping DEV Community 👩‍💻👨‍💻 safe. Here is what you can do to flag spectacularsloth:

Unflagging spectacularsloth will restore default visibility to their posts.