Variables can be used to store information that can be manipulated and referenced in a computer program. They provide a way to label data with descriptive names so that our code can be understood better.

Variables can be thought of as containers that hold information. They label and store data that can be used later throughout your program.

In Java there are different types of variables:

To create a variable, you must specify the type and assign it a value: 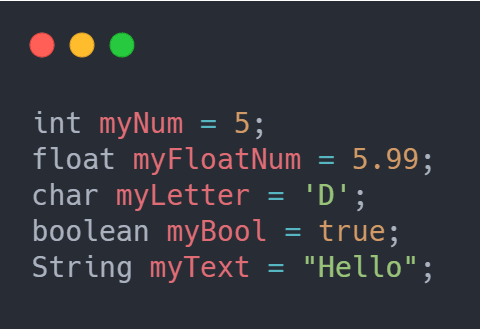 You can create a variable in JavaScript by putting the keyword var in front of it.

You can store a value inside the variable using the assignment operator.

But it is mostly common to initialize a variable in the same line you declare it.

With C and C based languages like C++ and C#, there are different types of variables defined with different keywords.

To declare a variable in C, you must specify the type and assign it a value. 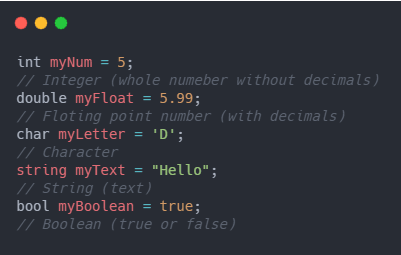 Unlike many of the other programming languages, Python has no command for declaring a variable. It is created the moment you first assign a value to it.

A variable name can be short (x and y) or descriptive (age, carName, total_volume.)

Here are some common rules for Python variables: 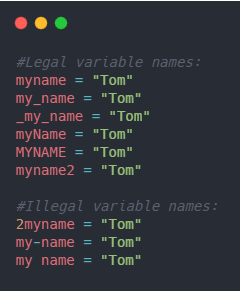 All syntax aside the most important part of learning variables, and any other part of programming is to be sure to understand the logic and methodology behind it. You shouldn't just memorize the syntax as if you were studying for a vocabulary test.

If you understand the logic behind what you are coding, it is easy to figure out how to solve any issue using your programming knowledge.

Self-taught Developer on the journey of learning and mastering the art! Any help and advice is welcomed

Getting started with Docker

This is a very simple introduction to Docker, showing how to run NGINX inside a container.

The Rails Model Introduction I Wish I Had

somos
@somos
Self-taught Developer on the journey of learning and mastering the art! Any help and advice is welcomed
work
Student
location
Montréal
work_status
I'm looking for work!
joined
Feb 22, 2020