With the advancement of web applications, it has become important for developers to choose the right technologies for building the front and back ends of their web-based applications.

When looking at the different technologies available for the front end of your website, it's not too hard to decide. When it comes to front-end development technologies, CSS, HTML5, and JavaScript are the most popular choices. However, for back-end technology, many options are available. Different options make it difficult to understand which technology may provide favorable results.

NodeJS and Ruby on Rails have been gaining popularity lately as leading back end languages. In this blog, you will understand the strengths and weaknesses of both frameworks and how they will impact your next project.

What is Ruby on Rails?

Ruby on Rails (often abbreviated as Rails) is a web application framework written in Ruby. It is a full-stack model view controller (MVC) framework, providing default structures for a database, a web server, and a web application. It encourages and facilitates using web standards such as JSON or XML for data transfer, HTML (for rendering user interfaces), and CSS (for styling).

Rails is an excellent framework for developing database-backed web applications. It is efficient and uses well-known software engineering patterns, including Convention over Configuration (CoC), Don't Repeat Yourself (DRY), and the Active Record pattern.

Ruby on Rails has had a big impact on web app development since it first came out in 2005. It was one of the first frameworks to offer features like seamless database table creation, migrations, and scaffolding of views, which made rapid application development possible.

Other frameworks have borrowed ideas from Ruby on Rails, and you can see its influence today in frameworks like Django (Python), Catalyst (Perl), Laravel, CakePHP and Yii (PHP), Grails (Groovy), Phoenix (Elixir), Play (Scala), and Sails.js (NodeJS).

NodeJS makes it lightweight and efficient, perfect for data-intensive real-time applications that run across distributed devices.

The server-side runtime environment is a real-time JavaScript application that can run across distributed systems like Linux, Microsoft Windows, and OSx. Its applications are written in JavaScript, making web development much easier. Additionally, there are many helpful JavaScript libraries available through npm websites.

The libuv library provides a thread pool to handle the concurrent execution of requests. The downside of this single-threaded system is that it doesn't allow vertical scaling. However, it works efficiently with almost all internet protocols.

8 Differences between Ruby on Rails and NodeJS 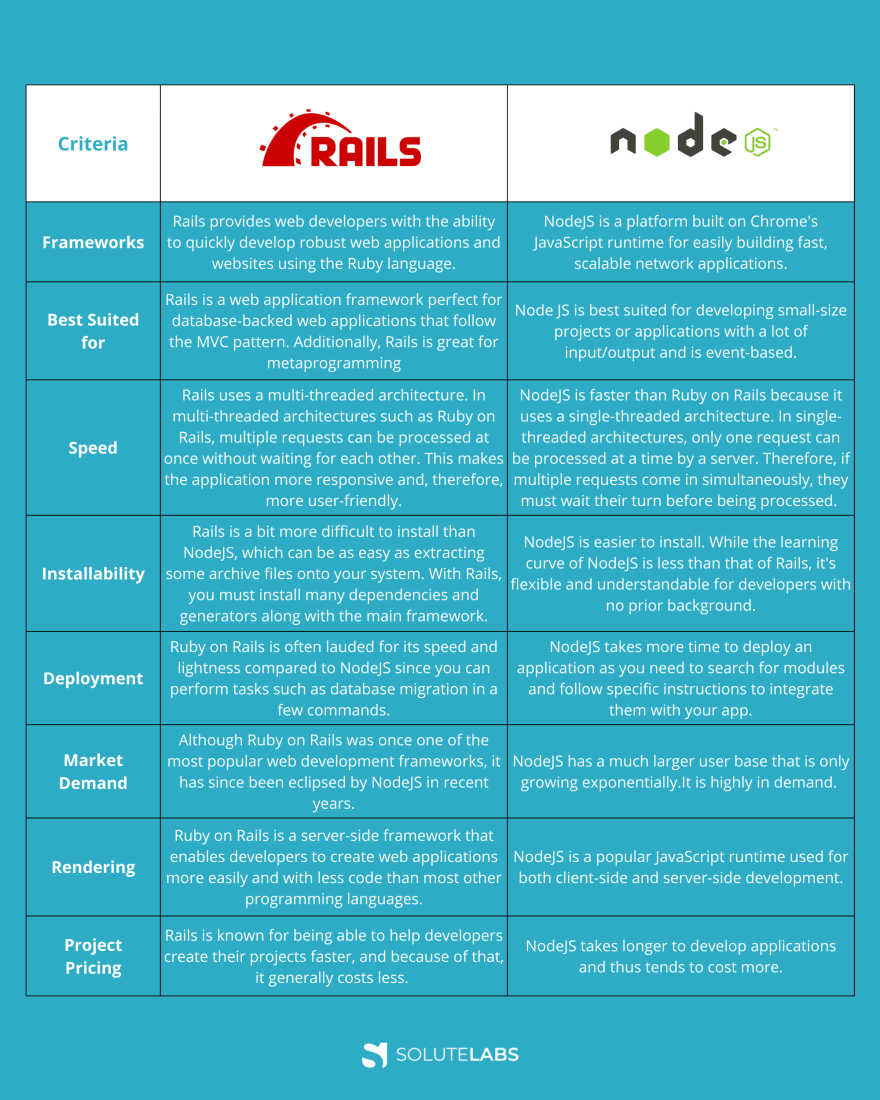 Top Features of Ruby on Rails

An MVC is a design pattern used in software engineering that separates an application into three interconnected parts: model (data), view (presentation), and controller (logic). With the MVC architecture, you can easily change each part without affecting the others. This MVC architecture makes developing and maintaining applications easier.

The Active Record pattern is one of the most important features of RoR. It allows developers to build objects that interact with databases via the Ruby programming language. The objects can be created using classes, representing tables in a database or rows in a table. Using these classes, developers can access information stored in databases without writing SQL queries or any other low-level code.

Ruby on Rails is appropriate for avoiding configuration files - something that can often bog down other software systems, including Java web application frameworks. With Ruby on Rails, you don't have to spend time setting up config files and can instead focus on more pressing matters. This is all thanks to the "Convention over Configuration" feature, which automatically assigns values without user intervention.

With Ruby on Rails, you can quickly deploy your application to any server without manually doing everything yourself. The framework makes it easy to set up automated deployment processes that allow you to run your code in production with just one command. This saves you time and effort when deploying new versions of your application.

2. One coding language for front end and back end

The main advantage of using NodeJS is that it allows developers to use only one set of code for both front end and back end development. This reduces development time as well as costs significantly. With other frameworks, developers have to write different code for each area of application development, but with NodeJS, you can write all your code once and use it for both ends.

The V8 Engine was designed to work with Chrome but has since been adapted for web app development. The V8 Engine can translate JavaScript into machine code with the help of C++. This makes the V8 Engine very helpful for servers and products based on machine code.

NodeJS is a powerful asset for any business looking to release their products faster. By lightening the load of unnecessary data, NodeJS allows developers to focus on building innovative applications quickly and efficiently. Consequently, this has become the preferred choice for many businesses as they strive to get a leg up in today's competitive market.

NodeJS helps with the development of microservices by being able to quickly process data and provide non-locking algorithms. This is beneficial because microservices often need to be able to handle a lot of data at once without running into any errors.

Ruby on Rails and NodeJS frameworks are great for web development, and their load time is lightning fast compared to other languages. But they have their differences in programming languages and their features, performance, and hosting. Ruby on Rails has maximum flexibility, while NodeJS has more easy tech capability.

Join SoluteLabs now!
PWA vs Native App: Which to Choose and Why?
#pwa #reactnative #webdev
Designing for Readability: A Guide to Web Typography
#ux #design #webdev
What's New in Next.js 13? All you need to Know!
#nextjs #javascript #react #webdev