In this part, we will cover the following commands ⬇️⬇️⬇️

Hello world 🖖. Welcome to the second part of the blog on Important GIT commands you'll need to know. The first part mainly covers the set of commands which are required probably when you are working alone on a project. It focuses mainly on the following points

As you might remember that in the first part we discussed two possibilities viz.

This part of the blog will cover the second scenario in depth. So let's get started...

How to get the codebase from the remote repo to my local machine? - git clone 👨‍💻

Suppose you want to contribute to a project. For that, you want to know that where the codebase is located. For this case, we are assuming that it's in a remote repo in Github. As you remember that we created a remote github repo in Part 1 of the blog. We will try to clone that repo in our local machine by using the following steps.

Before we move forward, I think it's high time that we need to clear a concept about how many different levels are there in between our working directory and the remote repo. The following section explains 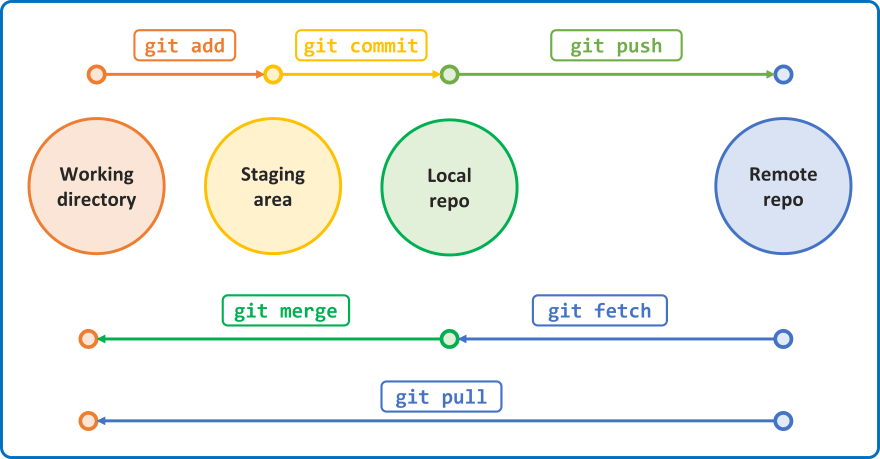 The above image is a very important one that helps to explain the different layers in the original version controlling process.

Now, this was the part that we have learnt till now (including the Part 1 of this blog) i.e. the journey from the working directory to remote.

Let's suppose that a co-contributor of your project has made some changes and pushed it to the remote. Let's try to simulate that. Remember our Github repo, in the "new-branch" branch of that remote repo, we have a file "new.txt" with contents as shown below.

To get these changes done by someone else in our local, we can use the following

git fetch will fetch the changes from the remote and put them in our local repo. It will not make the changes visible in the working directory. Let's see how it works

We are in the new-branch branch in local. Let's run git fetch. It shows that all changes from the remote branch are added in origin/new-branch as shown in the image below.

While remaining in new-branch branch if we open "new.txt" (i.e. the one in the working directory), it will not show us the changes done in Github. 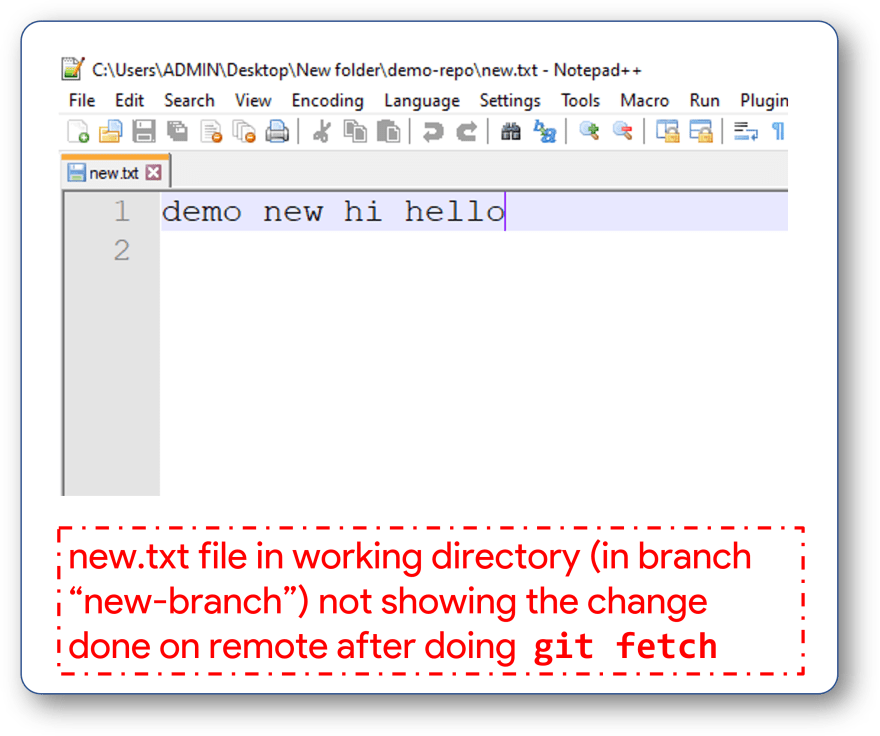 On the other hand if we checkout to "origin/new-branch" and open "new.txt" (i.e. the one in the copy of the remote "new-branch" branch), it will show us the changes done in Github. 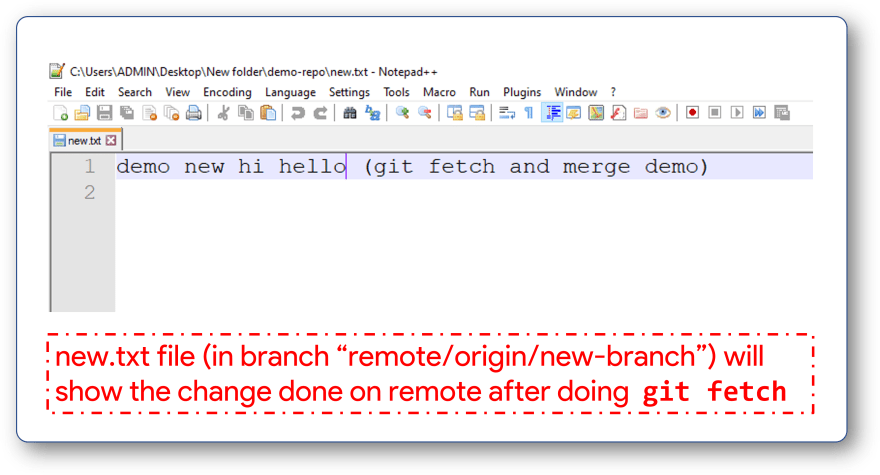 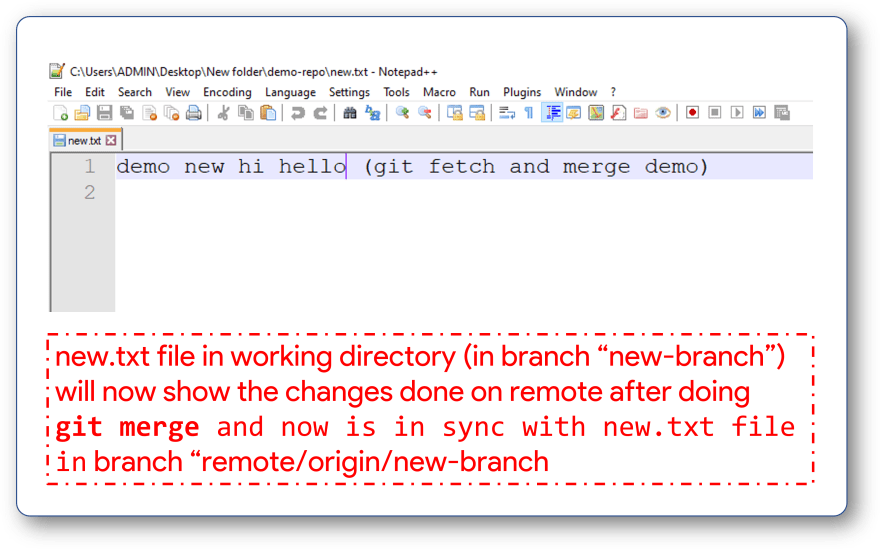 git pull is a shortcut to do git fetch and git merge is one go. It will thus download all the changes from the remote repo, and merge them directly to the local repo and working directory. So just remember the following

Let's say we again make some more changes in "new.txt" directly via Github and commit it.

Now in local if we do a git pull, it will download all the changes and put them in both "origin/new-branch" and in "new-branch" (i.e. all changes will be directly merged to the working directory). 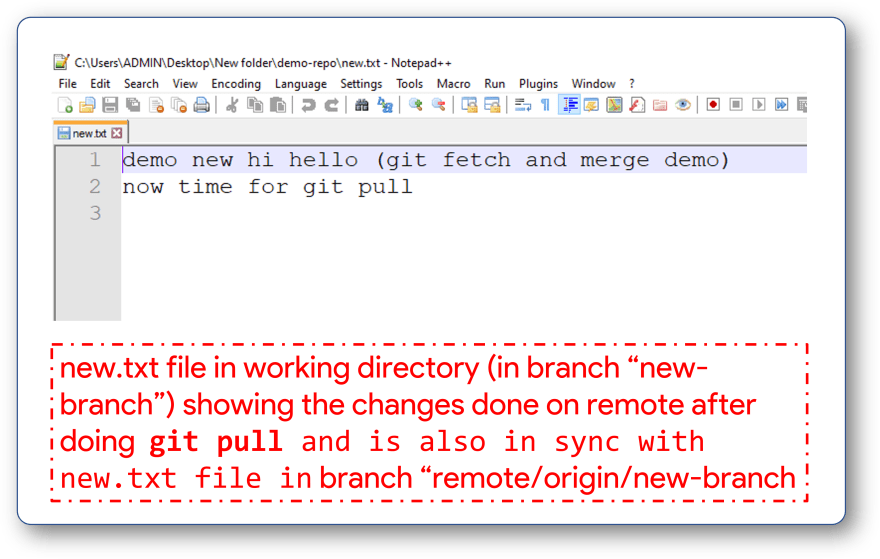 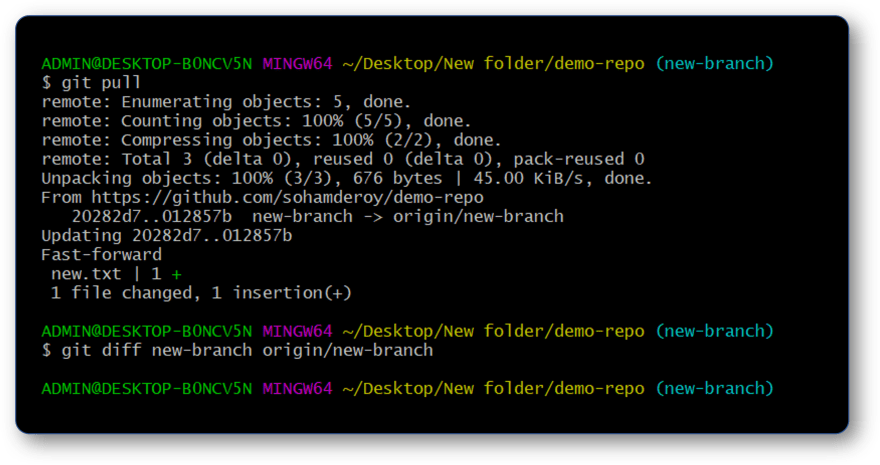 How to "Stash up" some of my recent changes for the time being so that I get to keep those changes somewhere without committing it? 📦

In case you are working on some files, made some changes but also at the same time want to check out some different branch, git provides us with an option to stash up/ keep those current changes in some other place. We can achieve this by following: 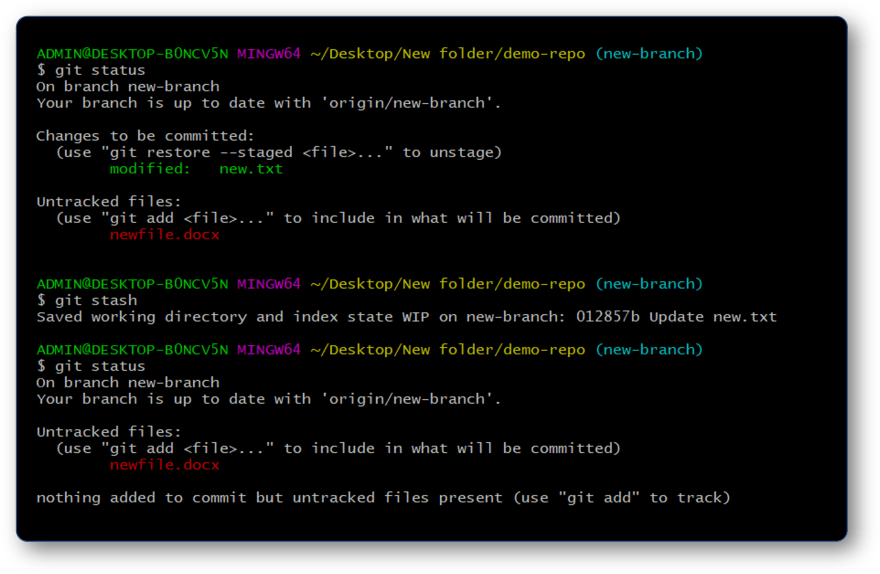 This marks the end of this blog. Don't get me wrong, this (i.e. the content covered in Part 1 and Part 2) is not all of git. It can never be. I will be releasing some more blogs in the future related to other commands in git. But the content covered in both these parts will help you sail through 99% of your daily task. That was my main motive for these two parts. There are some more important commands in git, but those are not used that often when compared to the ones mentioned in both these parts. Don't worry, I'll soon gonna cover them separately.

I hope that the content provided in both these parts will be helpful to all the readers. Thanks for reading! If you like this blog and feel it's useful, do consider hitting the link button and share it with your friends, I'd really appreciate that. Stay tuned! 🖖

Top 10 articles of the week for beginners🔫.