When I started using git, I had little concern about my commit history.
I only used git as a backup tool for my work without trying to have consistent and readable commits.

That's a common pitfall with git. I have often worked in teams where we would integrate all our commit iterations into our main branch, with commit messages as descriptive as wip, ending with a hardly useful history.

Doing so strongly limits the benefits of using git.
When we choose to enforce having a clean, readable history, composed of well-defined atomic commits on a single linear branch, the advantages of doing so greatly overcome the little extra time we spend to ensure everything we integrate to our main branch is clean:

In this article, I will introduce the main rules to maintain a clean git history and show you how I personally apply them in my day-to-day development.

There is no right way to use git, so don't take anything as an absolute truth but rather as an inspiration to create your own workflow.

Rules for a clean history

There are only three rules to enforce a clean git history:

This last one can seem surprising, as it is easy to use git without even knowing the rebase command.

What rebase does is that it "moves" your commits on top of the branch you are rebasing on.

The main drawback of using rebase is that it rewrites your branch history. Therefore it won't be consistent with your remote repository, and you will need to force push on it.

But it will allow you to have a linear commit history, whereas the merge command will create a new commit for each merge with the changes from the merged branch, resulting in a less readable history. 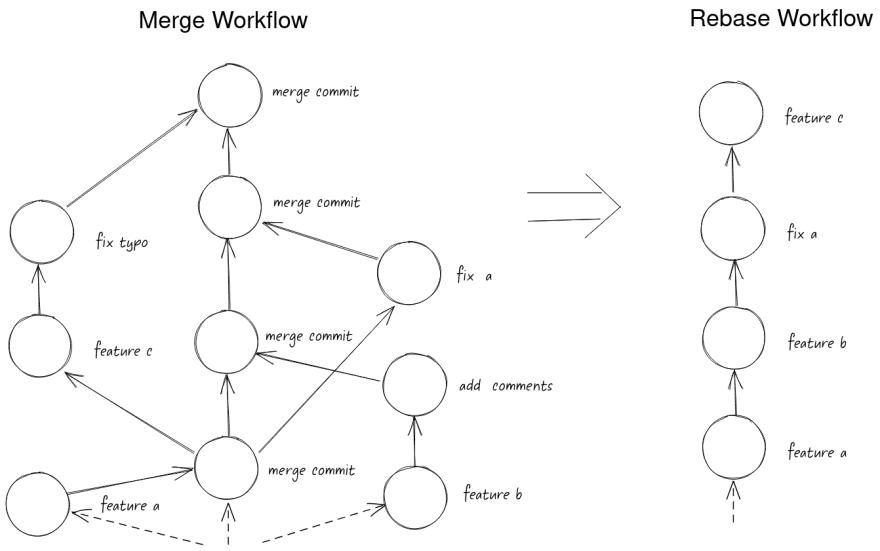 This workflow works well, no matter if you are alone on a personal project or working in a big team.

But if you can always deal with your mess alone, these rules will be helpful if they are enforced in a team.

Before we start, a word on git aliases

I use several times a day the commands shown in this article.
To be more efficient, I have set up aliases for most of them.
In the below examples, I will use the full command and show you as a comment the version using my aliases.

If you want to know more about them, you can go to my article explaining my git aliases for an efficient workflow.

I usually start by creating a new branch from the latest main branch.

NB: there are two main ways to create a new branch:

At this point, we just created a new branch similar to the main one.

Working on the issue

I then start working and will usually create several commits, depending on the complexity of the development. This allows going back if I take a wrong direction, or change my mind at one point. I still usually try to break things into commits that make sense. 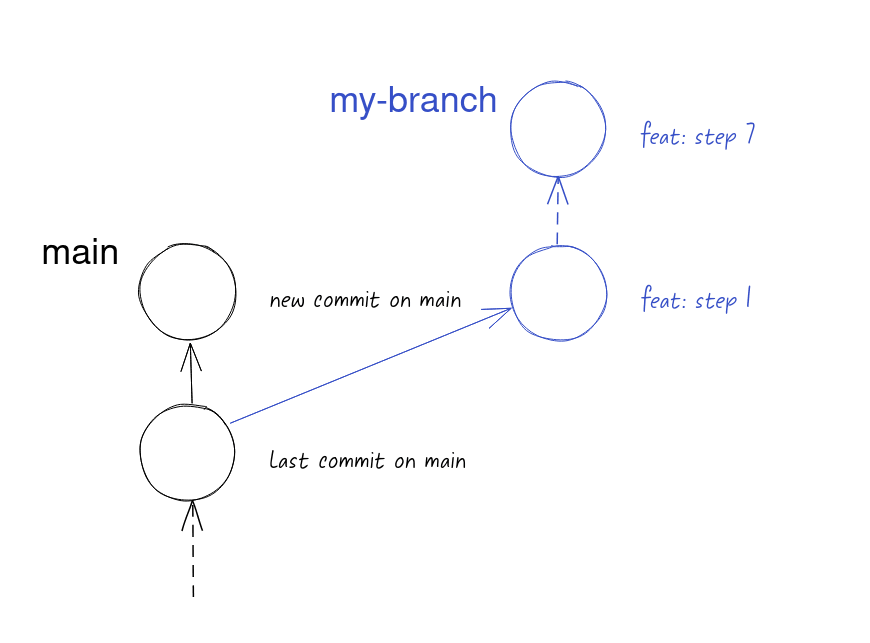 But at the end of the feature development, I will rewrite my history to have only one clean commit; or several if it is more appropriate (for instance, if I also fixed something while working on a feature).

To do so, I usually use an interactive rebase.

The way interactive rebase works is that it displays the list of commits, with the action you can do on it.
The main ones I use are: 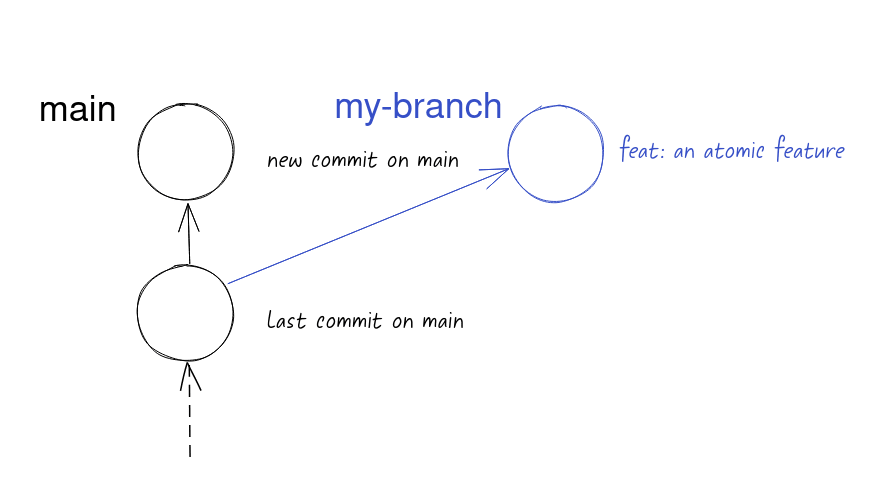 Once the history has been rewritten, I need to force push to the remote repository.

Before pushing my changes for a review, I will usually rebase on the main branch so that my branch is up to date.

This is needed only if new changes were integrated into the main branch.
If any conflicts were created, this is when you will be asked to solve them. 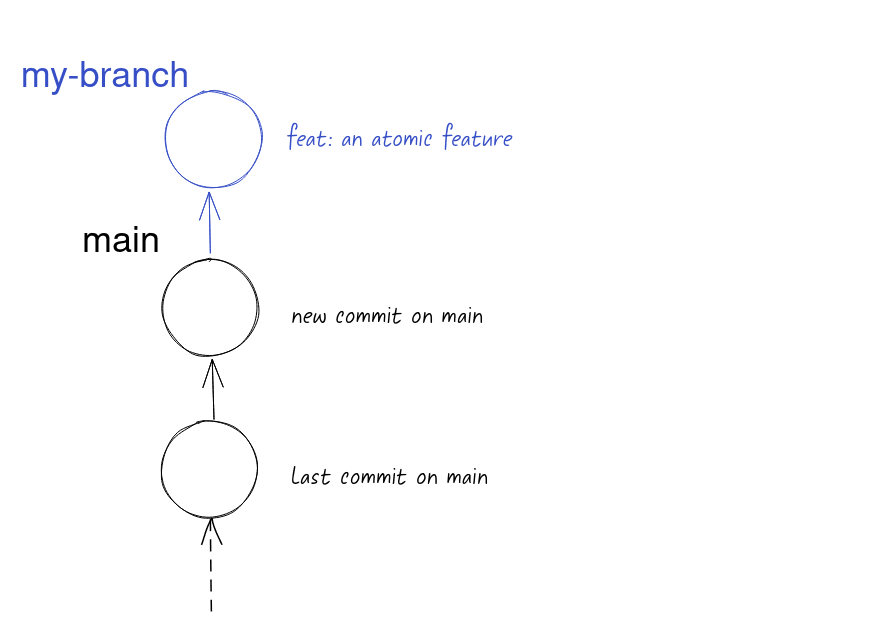 Reviewing the changes before integration

I then open a merge/pull request in gitlab/github, and almost always find corrections to make.

If the changes I want to make are important, I will create new commits, but for small corrections I usually integrate them directly to the current commit by amending it.

When everything seems clean, I will ask for a review and will usually integrate the changes requested in a new commit so that the reviewer can quickly check them.

Eventually, before integrating this new feature to the main branch, I will regroup the commits into one again as done previously, and rebase on the main branch if necessary.

NB: For this workflow to be effective, you need to enforce rebase merging in gitlab/github.

Finally, Once merged, I will delete my branch on the server (this is configured to be done automatically after merging) and on my local repository, so that these repositories stay clean.

I have automated the setup of all my projects thanks to tmuxp, and I always start by updating the repository and displaying its status.
That allows me to quickly see what branches I am currently working on.

These are the rules and the workflow I try to follow on all my projects.

I admit it requires some effort, but the time you spend making sure that your git history is clean and readable will save you a lot of time when you will need to understand why and how some changes were made.

The best keyboard I ever had for coding - Revisited