As monorepos seem to be having their moment in the developer community right now, we can see quite a bit of new monorepo tools popping up. npm recently announced npm workspaces with version 7, Nx has been gaining a lot popularity and lerna has been around for quite a while now. I use yarn in most of my projects now, and thought it would be fun to explore yarn workspaces with a simple monorepo setup.

In this workspace, I am going to be adding two React applications. Further, we can also add docker support to make it easier for deployments. Let's get started.

If you do not have yarn installed already, you can install by npm install yarn -g.

After filling out basic questions, you would have a package.json file.

To turn this project into a workspace, we need to add workspaces option in our package.json

apps is a directory where all our apps live.
Great! We've initialised our workspace, next step is to add applications.

This would take a couple of minutes to finish and by the end you would have two folders called admin and product inside the apps folder.

Great! We've added two apps to our workspace. The next step is let yarn know about each app's dependencies, so it can optimise and cache them. In the project root folder, run

This goes through the dependencies and moves them to a central node_modules folder in the project's root.

Let's test out our setup to see everything works. Let's add scripts in our package.json to start and build our apps

We've also added build scripts to compile our apps into static files.
If we run yarn admin or yarn product, we should see the standard create react app screen 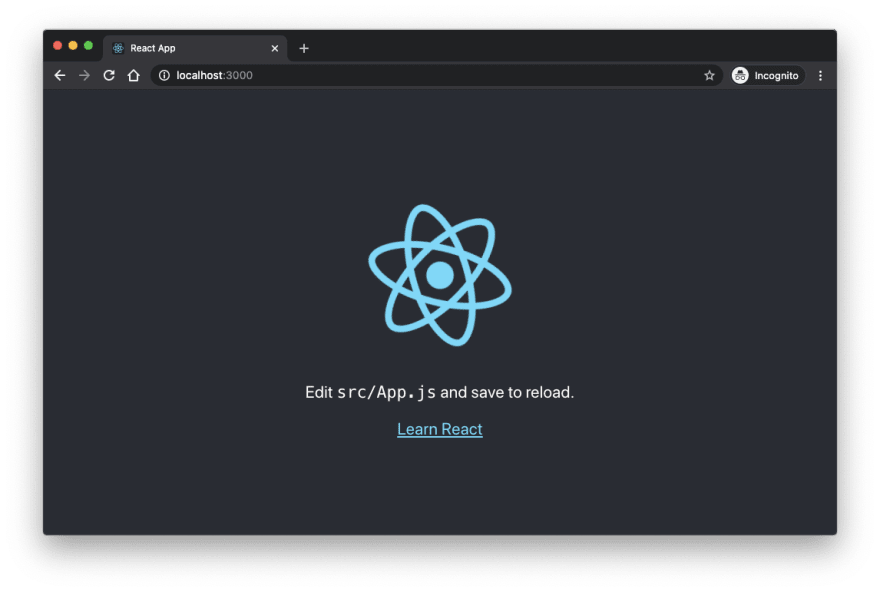 Docker provides us with a simple and effective way to package our apps into images that could be run anywhere without any dependence on the environment or operating system. With docker-compose, we can orchestrate multiple services(apps) with a simple configuration. Going too much into docker and docker-compose maybe a bit out of reach for this article, so let's dive into the docker setup.

First step is add a Dockerfile. We can add individual Dockerfiles for each app, but since the build process is same for both the apps, we can use a single Dockerfile for both of them.

First, we need a node environment to compile our React projects, and we need the name of the folder which we need to build, in this case admin or product. We get that using the BUILD_CONTEXT argument.

The next step is to copy over the source code into the image.

We are defining /base as our working directory. All our code goes here.
In the next 3 lines, we are copying package.json, yarn.lock and the package.json file of the particular app into the image.
Then we run yarn install to install our dependencies.

Interesting thing to note here is, we could have copied our entire source code into the container in one go. The reason we don't do that is, every instruction in a Dockerfile is cached in the background. By copying just the package.json and yarn.lock files, we can take advantage of this caching system. These files rarely change in the course of the project, so if we install our dependencies once, and if they don't change the next time we build, Docker will use the existing cache and not run yarn install every-time we build. This will significantly reduce our build times.

The next step is to copy the app's code and build.

Great, as of now our Dockerfile looks like this

Our compilation step is complete. Our React app has been compiled into static files and they are inside the image. But order to serve them, we need a web server. We could use node as our web server as we are already using it for building. But a node image is significantly bigger(close to a gigabyte) in size compared to a traditional web server like nginx.

We'll add nginx configuration as part our build step in our Dockerfile.

The first two lines are self-explanatory.
The third line is where is gets interesting. If you see the first line of our Dockerfile, it says as build next to our node version. This is done so we can refer to this as context in later parts of our build steps.
We have our compiled React app in the node image. We need to take those files and put it in our nginx image. That's what this line does. It copies the /fe/apps/$BUILD_CONTEXT/build folder from build context into /usr/share/nginx/html.
The last line is to start our nginx web server.

The next step is to define an nginx.conf config file nginx can use to run our app, which looks like this. This is a barebones nginx web server configuration which can be used for any frontend application.

For this, we need to add a docker-compose.yml file in the root of our project.

We define two services here, admin and product for our two apps.
In our service section, we define three properties, container_name, build and ports.

Awesome! We are done with our docker-compose setup. Final thing left to do is run and see for ourselves.

command is used to build out both our apps. This will compile our app using instructions from our Dockerfile and create an image.

To run these images,

This command will take our images and create containers and run them.

What we have now is a very simple implementation of workspace and docker setup. We can use this as a starting point and start adding backend services and component libraries to this setup.

We can add new projects into the apps folder and yarn would take care of the dependency resolutions for us.

The source code for this setup can be found here

You don't seem to have a generator with the name “react-native-ignite:model” installed.

Setup Next.js to use Tailwind with Nx