We have a Kubernetes cluster running on AWS Elastic Kubernetes Service.

In this cluster, we have an application which is usually working fine but sometimes our monitoring system notifies about unhealthy pods:

Here we can see that two pods are in the Evicted status — let’s go to see what is going on.

So, in Kubernetes, we can limit resources used by our applications in two ways — with requests and limits:

Pods in Kubernetes can be in one of three Quality of Service (QoS) classes:

You can check your pod’s QoS class with describe pod -o yaml:

Here we have requests for CPU only, thus such a pod will be under the Burstable QoS class.

Now, let’s go to see how QoS classes impact on the lives of pods.

When a Kubernetes WorkerNode in a cluster starts lacks available resources — memory, disc, CPU, etc — a cluster’s scheduler at first stops adding new pods on such a node.

Also, Kubernetes adds special annotations to such a node describing its status, for example  —  node.kubernetes.io/memory-pressure.

In such a case, kubelet on such a node will start killing running containers and their pods will be in the Failed status.

For example, if a node’s hard disk exhausted — then kubelet will start deleting unused pods and their containers, and then - will delete all unused images.

If this will be not enough — then it will start killing (actually —  Evict ) users pods in the following order:

Guaranteed pods, in general, must not be affected at all, but in case if a node have nothing more to remove and it still needs for resources — kubelet will start removing such pods as well, even if they are under the Guaranteed QoS class.

To find a real reason why a pod was evicted you can check its events.

Going back to our pods now:

Almost gigabyte of the node’s RAM.

And let’s check again resources specified in the Deployment of this pod:

So, as here we have no CPU limits, also limits and requests for CPU and memory are not equal  —  then it has QoS Burstable class. Also, this node had no other pods running so Kubernetes killed that one.

Grafana’s graphs can show us the whole picture — check the pod’s statuses history (see the Kubernetes: a cluster’s monitoring with the Prometheus Operator post):

And let’s see on the pod’s resources used: 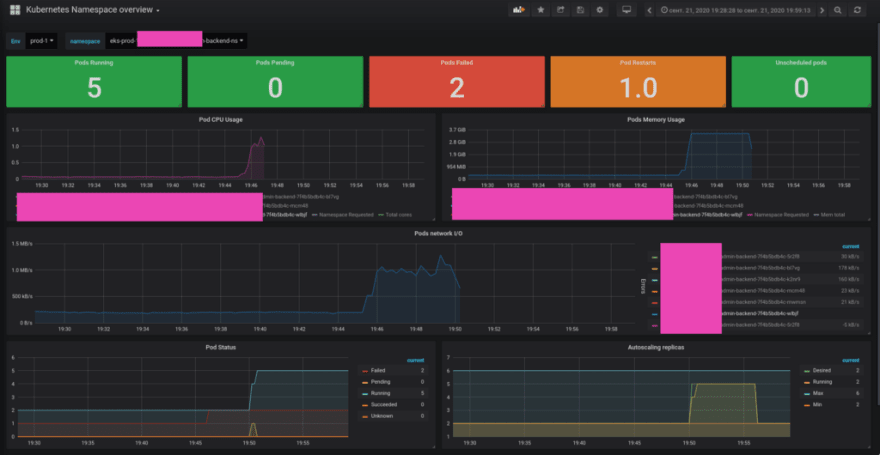 Actually, we can see that the pod got some incoming traffic and started consuming a lot of memory.

The memory on the node ended and kubelet killed that pod.

How to Install Drone CI Server in Kubernetes

How to type Next.js env variables in TypeScript