Or in another way, the story of how a data engineer from Germany created a project in the #StudyWithMe format and inspired hundreds of students to study IT professions. Description of tools and architecture of streaming projects.

Long is a German data engineer who is working in a real estate company, blogger and Twitch streamer. He creates educational content about technology, NFTs and Big Data and is the founder of the selfdev community, which focuses on bringing tech-enthusiasts together for cross-disciplinary collaborations around software development and self-development.

The idea of ​​a blog and live broadcasts

Data engineer Longlives in Berlin, at some point he realized that he wanted to help his friends and developers from all over the world to be more productive and responsible in their studies or work. He often gave recommendations to his friends and acquaintances about motivation and self-development, and then decided that he wanted to inspire developers around the world. In May 2019, Long created an Instagram blog where he started sharing his knowledge. A few months later, he combined his data engineering profession with blogging and began to talk not only about motivation, but also to share his technological experience.

The coronavirus pandemic has greatly impacted people's productivity, and Long saw that it was difficult for many people to get used to working or studying from home and being as productive as when working in an office or studying at a university. So he and his friends started creating virtual workspaces on Discord and keeping each other company so it would be easier to focus on work. At some point, he thought about making the broadcasts available to everyone outside of the small community. So, in April 2021, he started streaming “Study with me”. Since then, a whole community has formed around this initiative. In addition to streaming on Twitch, Long maintains a YouTube channel where he talks about technology and makes ASMR videos with keyboard sounds that allow you to focus on work. 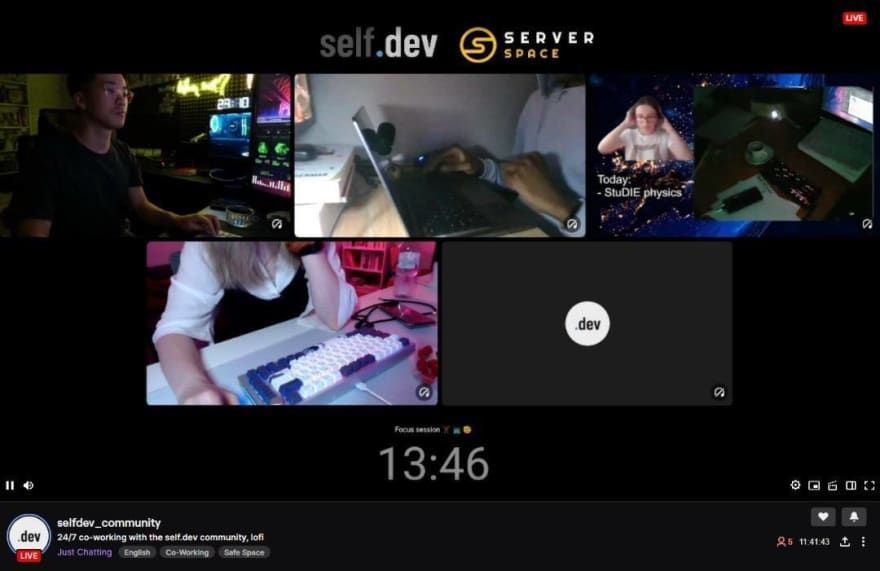 In order for the live broadcasts to work stably, Long needed to find a cloud provider that would provide a Windows VPS with an SSH connection. Long has tried many providers such as Vultr, Digitalocean, OhBubble and SiteGround. Serverspace turned out to be more intuitive. While working with other providers, Long has run into problems setting up SSH connections from multiple devices that he and Serverspace support team have only been able to resolve. In addition to quickly resolving issues, Long notes that the Serverspace control panel interface is much more user-friendly than other cloud hosts, and that the Serverspace documentation is clear and helpful to the user. Prices are reasonable and affordable, which is important for Long and his fellow Computer Science colleagues who have just started building their first projects and need Virtual Private Servers (VPSs).

At Serverspace, a data engineer uses vStack Cloud to host Windows and Linux-based VPSs. He runs software, web pages, and 24/7 live streams in the cloud. Most of the software are scripts and tools written in Python or NodeJS programming languages that run 24/7 and interact with Discord servers and the Twitch platform.

The main streaming tools are Streaming Platforms like Twitch and YouTube, OBS Studio, Discord, and the proprietary Pomodoro App developed by the community itself. Python scripting allows you to avoid IDLE status on certain software and OBS is used as the main software that helps organize the overlay that will be shown live on Twitch.

Discord is used to give community members access to 24/7 live streaming and documentation of individual progress toward set goals. The Pomodoro App is used to visualize Pomodoro sessions and remind all participants to take a break during work.

In addition to launching live broadcasts 24/7, Long and his team are working on multiple data-driven software and web projects. One of those projects is a web page that interacts with the blockchain and runs multiple bots which help Web3 Analysts getting insights on blockchain data. Other tools and bots monitor several marketplaces and crypto wallets where NFTs are traded (OpenSEA, looksrare) and send changes of selected NFT projects in real time to Discord servers. Thus, all members of the servers can follow the activity and always be aware of the important events.

Den of Chads is the first proprietary decentralized app that connects the nuxtJS frontend to the Ethereum blockchain via the MetaMask crypto wallet. There is a team of 3 developers working on this project, including Long himself. The page consists of multiple sub-pages, for example, the admin page, raffle page for giveaways and the project management terminal. All sections of the page are used by partners and analysts. 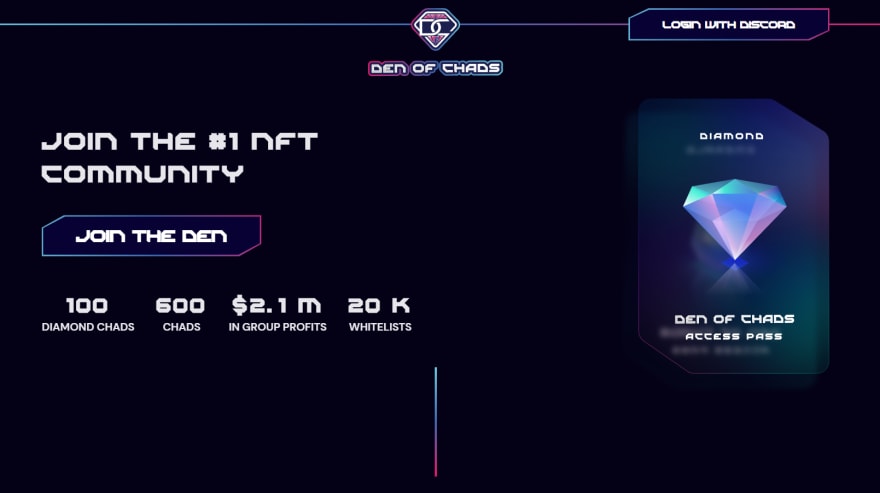 What are the benefits of partnering with Serverspace?

The main goal of Long is to make all members of the community more productive and responsible. Thanks to the provided VPS, each member of the community was able to get out of their personal comfort zone and increase their productivity.

With Serverspace VPS, streaming history documents more than 1000 hours of uninterrupted live streaming on Twitch and YouTube. If the maximum stream limit weren't limited to 48 hours, there would now be over 850+ hours of video on Twitch alone. In addition, Discord bots work flawlessly and send fresh data about upcoming NFTs from OpenSea. Thanks to this, community members are always up to date and can react instantly by making a small investment in NFT. Hosted web pages have flawless uptime.

What are Long plans for the near future?

Long is going to keep growing his community by creating more social media content, mainly Instagram and YouTube. He intends to generate more traffic and reach more people interested in learning about technology and self-development. Long wants to provide people with a platform and digital products that can help improve the productivity, perspective and mindset of each member. Together with community members, he plans to continue to iteratively improve the 24/7 live streaming. Long says that using the cloud and providing a platform for his tools, automations and digital
services will play a key role in the development and success of the community.

Thanks to Long for providing the materials.

The story was first seen at Serverspace success stories.

How to count lines of your code from your SHELL.

Serverspace.io
We're an international cloud provider, offering automated virtual infrastructure deployment. Linux or Windows-based services are available from any location on the globe in less than 1 minute.
What's your top YouTube channels for developers?
#discuss
What IDE and code editors do you use?
#discuss
API vs CLI
#api #programming #devops #cloud

Once suspended, serverspace will not be able to comment or publish posts until their suspension is removed.

Once unsuspended, serverspace will be able to comment and publish posts again.

Once unpublished, all posts by serverspace will become hidden and only accessible to themselves.

If serverspace is not suspended, they can still re-publish their posts from their dashboard.

Once unpublished, this post will become invisible to the public and only accessible to Serverspace.io.

Thanks for keeping DEV Community safe. Here is what you can do to flag serverspace:

Unflagging serverspace will restore default visibility to their posts.