Haskell is a blend of cutting edge research and well-tested, time-proven technology. It occupies a unique position between academia and industry. Some of its features, such as garbage collection and native code generation, can be found in mainstream languages. Other features, such as purity and lazy evaluation, are shared only by less popular, niche languages. In no particular order, here are the notable traits of Haskell:

It’s always hard to illustrate these advantages because they mostly manifest themselves in day-to-day coding when working on large-scale projects. Short, synthetic snippets of code that can fit in an article cannot represent the true value of these language features.

Nevertheless, even a synthetic example is better than none at all, so let’s see how code in Haskell compares to code in other programming languages.

Modern C++ with heavy use of smart pointers, STL containers, and RAII in general, is less susceptible to memory issues. However, it is still quite easy to mishandle memory using just a few lines of code:

g++ -Wall compiles this code without warnings. The extraneous delete causes a crash. But a crash is a benign manifestation of a memory issue. It’s way worse when it corrupts users’ data or opens up an attack surface. In this trivial example valgrind can detect the issue. Alas, it cannot guarantee that every codepath in a large program is safe.

In Haskell, allocation and deallocation of memory is done by the runtime system, so there’s less room for error. The Foreign.Marshal.Alloc module allows one to manage memory manually, but its use is extremely uncommon (under 4% of packages published on Hackage). Therefore, most Haskell programs are immune to this class of bugs.

Python is a high-level interpreted language that emphasizes code readability. For example, here’s a function that implements 1-dimensional Gaussian smoothing:

This is achieved with a convolution: we move our kernel along the signal and compute sliding dot products. For each point of the input signal, we try to overlap the kernel and cut off the edges (defaulting the signal to 0 when looking outside the range). 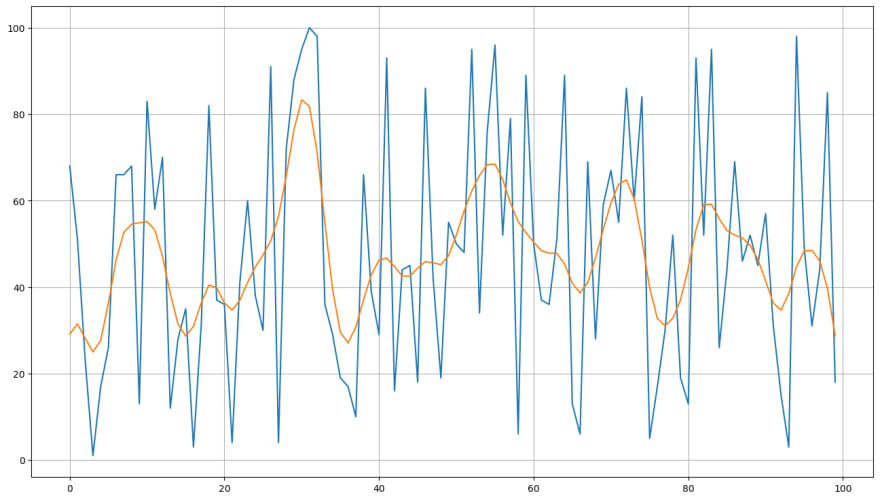 If we measure it with IPython’s default benchmarking tool, %timeit, we get these figures for a signal of length 5000 and a kernel of length 13:

Is this fast or slow? Let’s compare to np.convolve from NumPy which is implemented in C:

That’s microseconds instead of milliseconds, an orders-of-magnitude improvement. This means that Python by itself is a poor fit for performance-sensitive code, unless most of the work is offloaded to C functions.

Now let’s see how Haskell fares against Python and C. Oftentimes, Haskell developers use linked lists to represent sequences of values, even though it may not be the best choice of data structure for the task at hand:

To measure the performance, we will compile with optimizations (-O2) and use criterion, Haskell’s de-facto standard tool for benchmarking:

So, a naive and very simple Haskell implementation outperforms the naive Python code by a factor of 50!

What would it take to get closer to the C implementation? Turns out, not much — we just have to use the right data structure: arrays with slicing provided by the vector package.

Now we are 140 times faster than Python, and within 20% of the highly optimized NumPy implementation:

Compared to interpreted languages, Haskell makes it surprisingly easy to get decent performance.

A more detailed exploration of this example is available in an article by Maxim Koltsov.

There’s much debate as to whether static types are better than dynamic types, or vice versa. If you are in the dynamic typing camp, perhaps this article by Alexis King might convince you otherwise. And if you prefer static types, you’ll feel right at home writing Haskell.

In any case, the primary and unquestionable advantage of static typing is that it catches some of the bugs before the software is shipped to the users. Testing can only discover the presence of certain unwanted behaviors, whereas types can guarantee their absence.

In JavaScript, even a blatantly incorrect program may have silent bugs:

Since v is a number, it does not have any fields, and the assignment has no effect. The two lines may be far apart, so the issue can be hard to spot. And the condition p may be hard to trigger, so the tests may not catch this.

You could try to fight this by achieving 100% test coverage, but even then some issues may go unnoticed, as running code on fixed inputs does not guarantee its correctness on arbitrary inputs.

Alternatively, you could use TypeScript, which helpfully identifies the error before the browser even gets to run this code:

In this regard, Haskell is like TypeScript. The compiler will analyze the code and identify as many issues as it can.

Another advantage of static types is type inference. The compiler can tell you essential information needed to use an API. Let’s say we have the following function:

It’s concise but a bit cryptic. How do you know what it takes as input and what it produces as output? GHCi will report this information:

Specialise it to concrete types, such as [] and IO, and you get a pretty decent description of how to use it:

Even on an occasion when a Haskell library is poorly documented, it’s often possible to chase the types to figure out how to use it.

Pure functions are a joy to test and debug. They are deterministic: for equal inputs, they produce equal outputs. And their correctness is composable: if you verified that pure functions f and g produce correct results, then you don’t have to worry that using them together might affect their behavior due to shared mutable state.

This empowers us to reason about parts of the system in isolation. And it allows us to use property-based testing, one of the most powerful testing techniques. The idea is to apply pure functions to random inputs and verify their results.

Say we are implementing a sorting algorithm:

No matter how complex the implementation, we can devise a few simple tests to check it:

With these properties in mind, we define the following test:

Using the QuickCheck library, we can generate random inputs to check this property:

Running this test will produce a report:

Due to the randomized nature of property-based tests, they tend to reveal unexpected corner cases. And while it’s true that one can write pure functions in any language, Haskell encourages it, and the culture around it is built around purity.

In Haskell, it is always valid to factor out subexpressions as a form of refactoring. Consider this program:

We get a number from the user, and if it’s even, perform an expensive computation; if it’s odd, do nothing. Skipping the computation can save us a lot of time:

Of course, this is only possible because if then else is computed lazily: the then branch is evaluated only when the condition holds, and the else branch is only evaluated when the condition does not hold. Even in eager (strict) languages, there are often built-in lazy operators available, such as && and || in C++. This is also known as short-circuit evaluation.

The remarkable property of Haskell is that user-defined functions also exhibit this behavior. Let’s factor out our check into a custom function, whenEven:

In an eager language, this simple refactor would lead to a major performance degradation. The expensive computation would be always performed before the whenEven call, even though its result is not needed half the time.

There are eager languages that claim to support functional programming, including OCaml, PureScript, Scala, Idris, and so on. But what sort of functional language doesn’t let you decompose your code into functions without losing performance?

In Haskell, we can focus on readability when structuring the code. We can even move the expensive computation entirely outside the whenEven call:

Furthermore, laziness is basically a prerequisite for writing modular, reusable code. Consider these functions in Haskell:

Notably, due to the short-circuiting properties of &&, the and function will stop as soon as it encounters the first False value. And thanks to lazy evaluation, this property carries over to all:

Say expensive_check x3 yields False, then checking thousands of other elements will be avoided. To preserve these computational properties in an eager language, we would have to write all from scratch:

This means that the most basic notions of functional programming, such as function composition or folding over a list, require lazy evaluation to work properly.

A more detailed exploration of this topic can be found in an excellent article by Lennart Augustsson.

In Haskell, the runtime system implements various primitives for concurrent programming, such as MVar. But often you will find yourself using high-level combinators, such as mapConcurrently from the async package:

This function will process each list element in its own thread:

Running this program will produce various lovely outputs, such as this:

As you can imagine, instead of printing to stdout we could make HTTP requests or perform any other actions.

For a more detailed overview of async and stm, check out the article by Michael Snoyman.

Haskell has a built-in mechanism for code generation, deriving:

This will generate the following instance:

This is a powerful mechanism that can derive instances of Show, Eq, Ord, Functor, Foldable, Traversable, and other classes. However, it is not always sufficient.

A simple example of something GHC is unable to generate is JSON encoders and decoders. However, there is a library called aeson which, with the help of Template Haskell, can automatically derive ToJSON and FromJSON instances:

The second line generates the following instances, thereby saving us from having to write them by hand:

deriveJSON is defined in Haskell, not in any special meta-language. This means we can write Haskell code that generates other Haskell code.

For a more involved example, a common way to manipulate data in Haskell is by using optics. Optics come in many forms: getters, setters, folds, traversals, lenses, prisms, isomorphisms, and so on. Unfortunately, the compiler does not generate optics for data types:

Fortunately, instead of writing the name and uuid lenses by hand, we can use a Template Haskell function from the lens package:

For another example, consider singleton types, which are a way of modeling dependent types in Haskell. For any data type, we must define a corresponding singleton type:

To avoid this boilerplate, the singletons package provides a Template Haskell function that does this automatically:

Aside from code generation, this feature can be used for compile-time evaluation:

Haskell has been around for quite some time and has accumulated a wealth of libraries. Here’s a microservice for generating random numbers, with a JSON API, remote monitoring, and command-line configuration:

In under 50 lines of code, a third of which is imports, we implemented a web service. Running it without parameters tells the user about its command-line configuration flags:

Say we run it as random-web-service --ekg-port 8000 --port 8080. Now we can check its memory usage, allocation rate, productivity, and other metrics, by opening http://localhost:8000 in the browser.

And we can test its functionality by sending a few queries with curl:

This example is hardly impressive if you’re coming from a mainstream language. But it shows that Haskell has the libraries needed for writing actual applications. That’s an area where academic and research languages are often lacking.

For a detailed overview of the Haskell ecosystem, check out the article by Gabriel Gonzalez.

Haskell is the main technology that helps us deliver high quality software. There are various criteria to judge software quality, but the most important ones are correctness, performance, and maintainability. Haskell facilitates writing code that scores high on all of these accounts:

Don’t hesitate to comment and let us know what you think about Haskell’s advantages and disadvantages! Do you use it? Why, or why not?