Kubernetes, also known as K8s, is an open-source system for automating deployment, scaling, and management of containerized applications.

And in Kubernetes, Pods are the smallest deployable units of computing that you can create and manage in Kubernetes. When I started learning Kubernetes I had two questions about Pods in particular :

In this article I will try to answer these two questions. When I had these questions, the common answer I would get is

Pod is just a wrapper around the container.

But nobody would explain, why this so-called wrapper is needed and what purpose does it serves? So let's dig in and find out.

What actually is a Pod ?

Containers are a great way to deploy single unit of software however if you want to run multiple software together you would have to deploy group of containers that are isolated but partially share the environment with one another. What's more, Kubernetes needs additional information for container management, such as a restart policy, which defines what to do with a container when it terminates, or a liveness probe. So Kubernetes provides an abstraction for this and call it as Pod . Pod hides the underlying complexity from the end users.

You must be wondering what do I mean with partially sharing the environment and how Pod manages all this stuff internally ? Let's understand.

If you run a Pod in your Kubernetes cluster and check the containers running in the node using docker ps you would find something odd.

As you can see here, there are two containers launched, one is our actual nginx container that we launched and there is another additional container with /pause . Let's call this pause container. 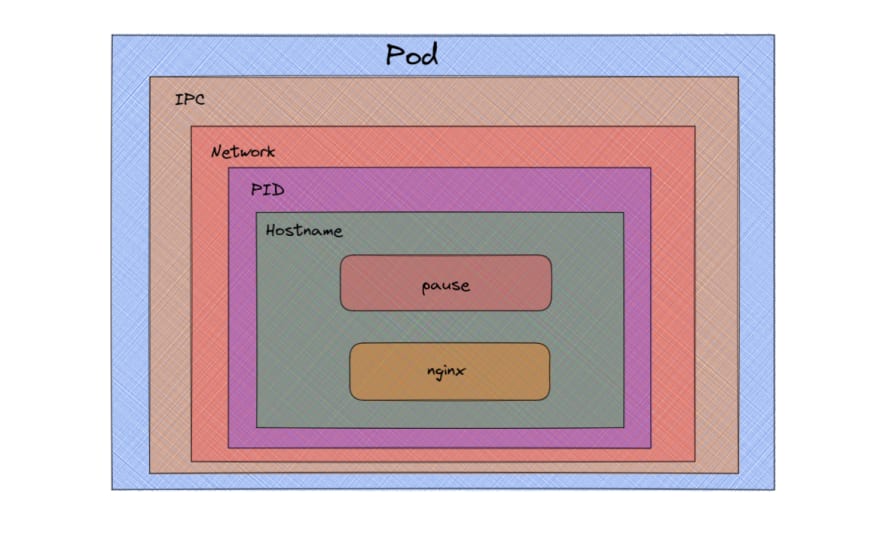 This namespace sharing in the Pods have several benefits. Suppose for example, we have two containers say application and monitoring and both containers have joined the pause container's namespaces. Sharing of :

To verify weather both containers are really sharing these namespaces or not, we can get the PIDs of both the containers and then check if its true. Here we go. 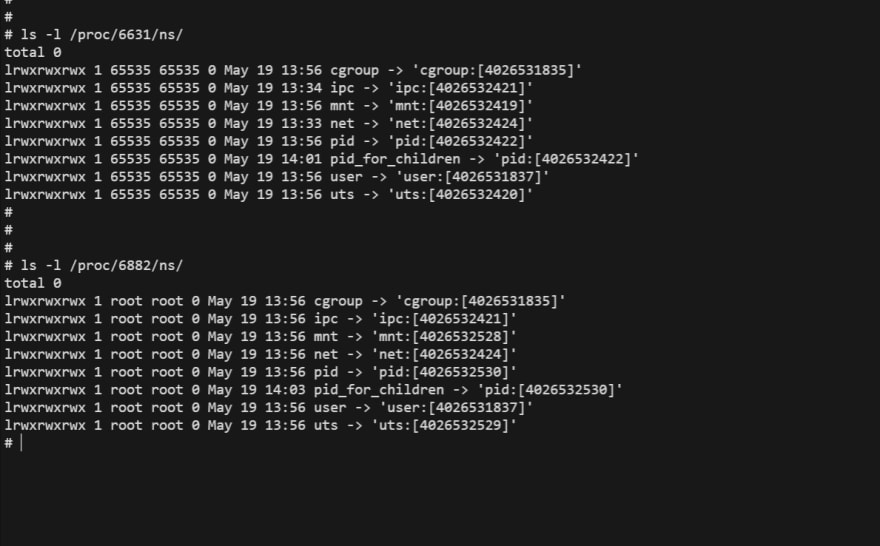 If we compare these two we can see that the namespaces are same for both except PID (We will discuss it later.)

The second responsibility of the pause container is that it acts as PID 1 for the Pod and reaps all the zombie processes given that PID namespace sharing is enabled. In Linux PID namespace, the processes form a tree like structure called as process tree and PID 1 is the root of that tree. Generally it is reserved for init processes like systemd and all other process start from this init process using fork and exec syscalls. 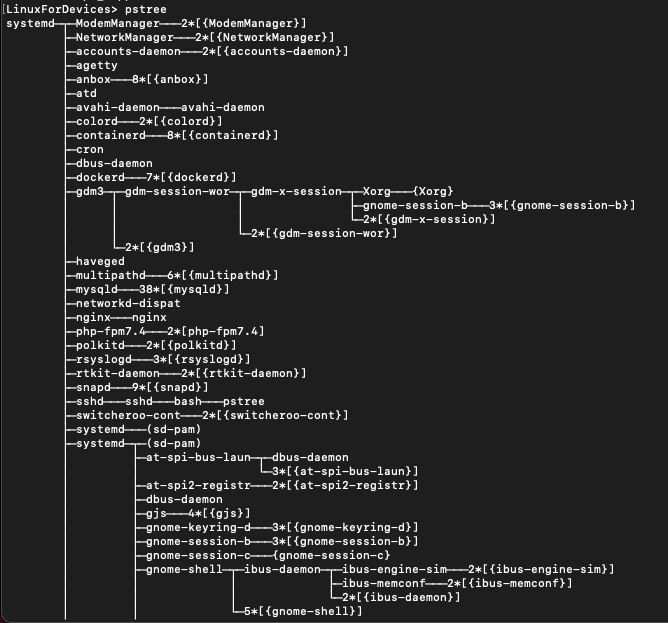 When ever a new process is created, a new entry is added to the OS process table. It records the state of the process and the exit code. When a child process has finished running, its process table entry remains until the parent process has retrieved its exit code using the wait syscall. This is called "reaping" the zombies.

But if parent dies before the child, the OS assigns the child process to the "init" process and thus the init process "adopts" the child process and becomes its parent. Zombie processes (now called <defunct>)are processes that have stopped running but their process table entry still exists because the parent process hasn't retrieved it via the wait syscall. Technically each process that terminates is a zombie for a very short period of time but they could live for longer. 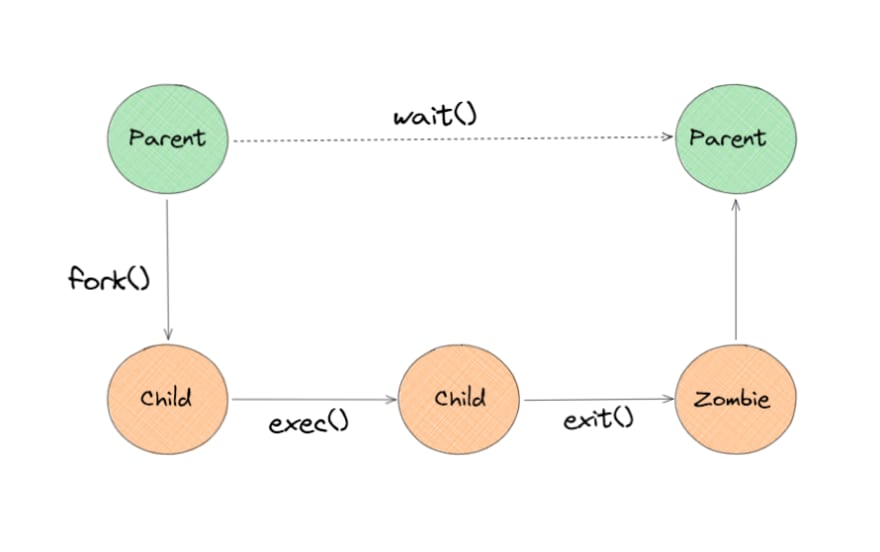 In Kubernetes pods, containers are run in much the same way as
above, but there is a special pause container that is created for
each pod. These pause containers assumes the role of PID 1 and will reap an zombies by calling wait on them when they are orphaned by their parent process This way we don't get zombies piling up in the PID namespaces of our Kubernetes pods.

There is whole lot more going on in the Pods but it is not possible to discuss all this here due to space-time complexity 😄 So I leave it to you to explore further. I know its a long one but I hope know you understood what exactly a Pod is and how it works internally. Thanks for the read and see you until next time..!!

12 Ways of Getting Ready for Microservices

Building a CI pipeline for a Go CLI application with Dagger

Saurav Rana
I'm a 22-year-old boy with a passion to learn about the DevOps Landscape. I love to explore things and deep dive into how these little pieces of code come together to form such state-of-the-art tools.
What was your win this week?
#discuss #weeklyretro
Side Project Sunday! How's it going?
#showdev #sideprojects #discuss #watercooler
What If Animals Could Code...
#jokes #discuss #webdev #programming

Once suspended, sauravrana646 will not be able to comment or publish posts until their suspension is removed.

Once unsuspended, sauravrana646 will be able to comment and publish posts again.

Once unpublished, all posts by sauravrana646 will become hidden and only accessible to themselves.

If sauravrana646 is not suspended, they can still re-publish their posts from their dashboard.

Once unpublished, this post will become invisible to the public and only accessible to Saurav Rana.

Thanks for keeping DEV Community safe. Here is what you can do to flag sauravrana646:

Unflagging sauravrana646 will restore default visibility to their posts.