Hey there, so in this blog, I'm gonna share how did I manage to submit this small project of mine which I was able to build in the last 7 days of the Hackathon through some ups downs in the way.

The Hashnode x HarperDB Hackathon started almost a month ago and as I use Hashnode almost every day so obviously I got to know about it. And started to wonder well what should I make.

Then after some days, I had to appear for my college's semester exams which just made me forget the hackathon due to all the things that were going on.

So, just before a week when I visit the Hashnode homepage I see the banner of the HarperDB hackathon and I just remembered that I had to build something for it and I totally forgot about it ! And now I was also doing some remote work at a place where I was interning.

And I remember thinking either I just have to skip this hackathon as my perfectionist side would not be satisfied with what I make in this small-time or I could just
build something and that would just help me hone some skills and also learn using HarperDB! 📌

I literally had no obvious idea on what to build so as I was on my Twitter profile I remember tweeting saying that I would be building a Clone of Hashnode's homepage in React.

And if you are wondering why I decided to build this it was because :

So, here it is a fully Responsive, Static clone of our very friendly Hashnode's Home Feed ❣ : 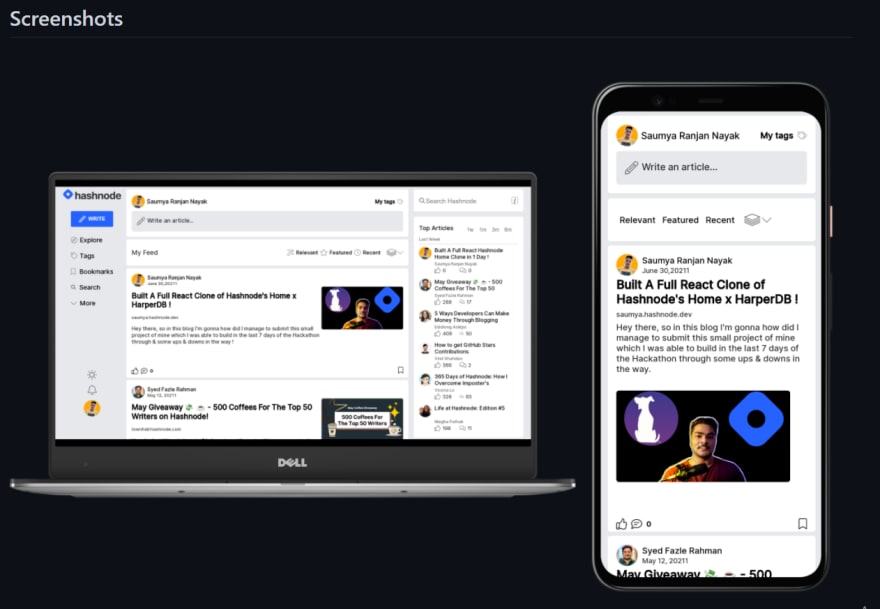 Then the question was well - How would I use HarperDB in it? I thought okay, so what if instead of mapping the feed components from a dummy JSON data,
what if I could get those data from the Harper Database.

That was a good enough idea for me to get started as I also had to play around with HarperDB to learn how it works.

I have seen a lot of awesome blogs that folks like have published on using HarperDB. But I thought let me just play around, read the docs and see what happens.

And to my surprise I was able to figure whatever I needed in a short amount of time as HarperDB:

This is how the data looks like in my HarperDB instance, clean & cool 😎 👇 :

The HarperDB Team has really put some great work into building this Product. 🙌
And in my situation, it also shows how HarperDB helps if you want faster development.

Then I quickly spun up an Express Server with POST and GET endpoints to store these JSON files and retrieve them on my Client side.

If you are a code junkie here's how the **Blogs GETting **controller looks like :

At first, I used Postman to POST the JSON files to the HarperDB to be able to fetch them on the client-side.

Here's the Live App on the Internet: https://hashnode-home-clone.vercel.app/ 🎉

*Check out the full code here *:

*I have laid the foundation but together we can make it big, you can contribute in : *

Here's the just Frontend Repository you can Fork, Code & Push Pull Requests to ! :

I have also made this video regarding this Hackathon where I could not stop but speak about my love for Hashnode and how awesome HarperDB is ! 😄👇

I'm really happy that I didn't just quit and built something. 🙏