Hello everyone, here is a quick reference guide of the git commands:

Clone the remote repository with HTTPS or with SSH. This should create a new child directory for the project sources.
git clone <REPO CLONE URL>

Shows the status of your current branch. It will tell you which files you have modified, which files are stages for commit and which files are not. It will also let you know if your local branch is behind, or not up to date with, its remote tracking branch. This command is particularly useful in combination with git add when you only want to commit certain files.

Create a branch, or show a list of local or remote branches. With git branch, you can add options to do branch-related things:

Fetches branches from the server, along with their history and information. You can also use git fetch origin to update your remote-tracking branches.

Update your working directory by performing a git fetch, followed by a git merge. This is useful if you want to bring your branch up to date with the remote-tracking branch.
You can also use the --rebase option to perform a rebase rather than a merge.

You made changes to your branch, and you want to stage your changes for committing. You will need to add them to what is known as the index. Here are two ways to do this:

You want to make a commit! Awesome! Here's how you do it:

Once you make a commit, you will need to push your changes to the server to make it visible to the world. Once you push, your branch and commit(s) will be visible to others.

Show the history of all branches and their commits. Useful for seeing the most recent commit and getting commit hashes. 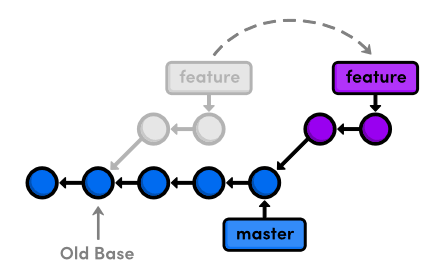 Rebasing is a bit more advanced, but incredibly useful when you need it. When you perform a rebase, you are changing the base of your branch. In essence, a rebase will look at each commit on your branch and update the code to make it seem like you've been working off the new base all along. Sometimes, a rebase will barf if it encounters a situation in which it tries to update a piece of code that you have already modified. In this case, it doesn't know which version of the code to use, so it leaves it to you to resolve them manually.
Although they have similar uses, a rebase differs from a merge in that a rebase updates your branch by tweaking each commit, and merge will update your branch by creating a new commit at the tip of your branch. Usually, there are standards and practices employed in a project or team around which method is preferred. Have a discussion with your team about which workflow they prefer.

Stashing allows you to save your current unstaged changes and bring your branch back to an unmodified state. When you stash, your changes are pushed onto a stack. This is especially useful if you need to quickly switch to another branch without having to commit your incomplete changes.

Git reset is used to unstage files or remove commits. It does so by changing what the tip of the branch (HEAD) points to.
Three trees are affected by a reset:

Best Cron Alternative You're Not Using

Once suspended, sarath_pm will not be able to comment or publish posts until their suspension is removed.

Once unsuspended, sarath_pm will be able to comment and publish posts again.

Once unpublished, all posts by sarath_pm will become hidden and only accessible to themselves.

If sarath_pm is not suspended, they can still re-publish their posts from their dashboard.

Once unpublished, this post will become invisible to the public and only accessible to Sarath P M.

Thanks for keeping DEV Community 👩‍💻👨‍💻 safe. Here is what you can do to flag sarath_pm:

Unflagging sarath_pm will restore default visibility to their posts.