What's Recoil? Recoil is a State Management Library for React & React-Native applications created by the team of Facebook, which can be used as an alternative for Redux or Context API, or any other state management libraries. Recoil lets you create a data-flow graph that flows from atoms (shared state) through selectors (pure functions) and down into your React components. Atoms are units of the state that components can subscribe to. Selectors transform this state either synchronously or asynchronously.

Recoil is easy to set up compared to a lot of Boilerplate code to set up Redux or other state management libraries.

Without further ado, let's dive into the action!

Then install the Recoil in your project with the below commands for NPM or Yarn.

Navigate to the root file of your project, in our example, its App.Js. Import the RecoilRoot and wrap it around your component at the root level.

Create a new folder under the src folder, you can name it 'store' or anything you like, in our example, we will call it 'recoil'. Under the 'recoil' folder, create two subfolders called - 'atoms', and 'hooks' and create an 'index.js' file for each folder like below. 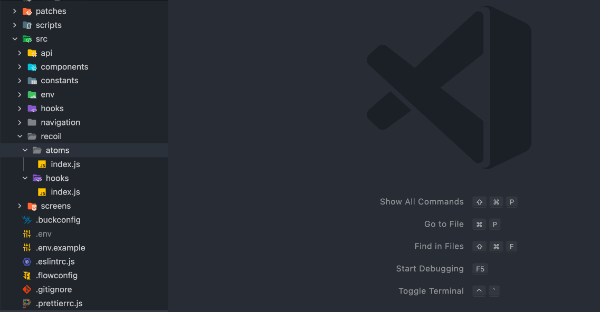 This is where you create your initial state with default values, each atom is a state (similar to useState). When the state of this atom changes, only the components subscribed to this atom will rerender, so there won't be unnecessary re-renders. You can create as many atoms as needed.

This is where you create your actions to manipulate your state (similar to setState in useState). You can create all your business logic here and even the network requests to update your states. We import the atoms from the initial state and create an action to update the state. Export both as State and Actions.

Finally, to use our newly created state and action, we would import the hook into the component, in our example 'HomeScreen.js', and destructure our hook into 'state' and 'actions'. Access the state directly into the component and use the action handler to update the state.

That's it. You can also create multiple hooks to separate the logic as per your needs.

As you can see, it was so easy to set up global state management for our entire application. With the help of hooks, we get the type IntelliSense of our state and its expected types as well. Recoil has a lot of other benefits as well. Do check out their docs at Recoil.org.


Thank you for reading all the way through.

Hope this post was useful to improve your Developer Journey !!

Once suspended, santhoshumapathi will not be able to comment or publish posts until their suspension is removed.

Once unsuspended, santhoshumapathi will be able to comment and publish posts again.

Once unpublished, all posts by santhoshumapathi will become hidden and only accessible to themselves.

If santhoshumapathi is not suspended, they can still re-publish their posts from their dashboard.

Once unpublished, this post will become invisible to the public and only accessible to Santhosh Umapathi.

Thanks for keeping DEV Community safe. Here is what you can do to flag santhoshumapathi:

Unflagging santhoshumapathi will restore default visibility to their posts.