We just cant imagine our life without git and Github. Being a developer it is must to understand Git. Git is the most commonly used version control system. Git tracks all the changes you make to your files so that you have record of all the changes that has been done. In this read, you will work on git practically and will gain the basics of Git.
Learning new stuff takes many sleepless nights and to make up those restless efforts, we can have a therapy and for me listening to her is the best therapy 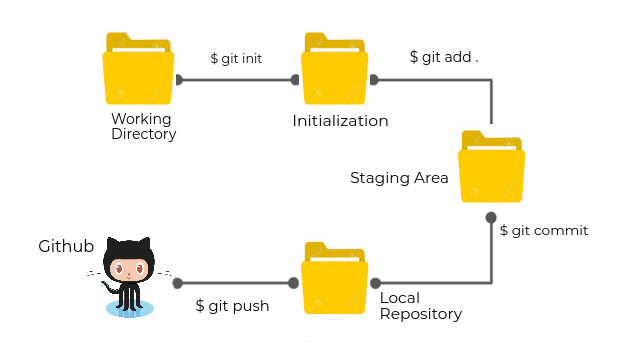 It start with the Initialization. We need to initialize our working directory as Git Directory with the command git init. Once we have initialized the git repository we can add our files to staging area. Staging is nothing but tracking files from the working directory. We can add untracked files to staging area with the command git add <filename> or git add . to add all the files from that particular directory. We cant commit untracked files from the working directory until and unless we dont stage them. The commit is used to save your changes to local repository. Every time you save that file, all the changes made are tracked. Git commit command takes the snapshot recording the staged changes. We can commit a file by the following command git commit -m "<message>", message should be related to the changes made in that particular file at the time of staging. Once all the files are staged and commited, then we can push the local repository to the code hosting platform like Github for collaborations and to avoid losing all our program files due to any kind of failure of our local machine.

So that now we have installed git on our machine, lets get started with git with our identity.
Setup git with the git config command.
First we will add username by the following command.

Then we will add our email address by the following command.

Thats it. We have setup our git. Let work on git practically.

LETS DO IT PRACTICALLY

Open terminal and make a new directory with following command

now navigate to the directory

Add some files to the directory.

Now add some lines to your index.js file so that we can add them to staging area.

git status command is used to check the current status of our working directory.

As we can see there are no commits yet and we have 4 untracked files.
Now with the command git add, we will track/stage the files.

Lets check what git status has to show now

So we have staged all the files. Lets create another file and name it to_Be_Deleted.js.

We have successfully staged our newly created file to_Be_Deleted.js.
Now we will learn how to unstage an file.
For unstaging an file we will use git rm --cached <file> command.
Lets unstage the to_Be_Deleted.js file.

Thats it, we have unstaged the file successfully.
Lets check it using git status command.

Yepp! We have unstaged the file.
Delete the file to_Be_Deleted.js

Now we will be working on git commit command.
Lets commit our staged files.

Lets check the status of our working tree after committing files.

So as we have committed all the files we get the message nothing to commit, working tree clean. That's cool.
Lets check the logs using git log command. This command is super handy.

It shows the complete commit history with commit id, author, time and commit message.
Using git show command we can track the changes made on that particular commit using the commit id. 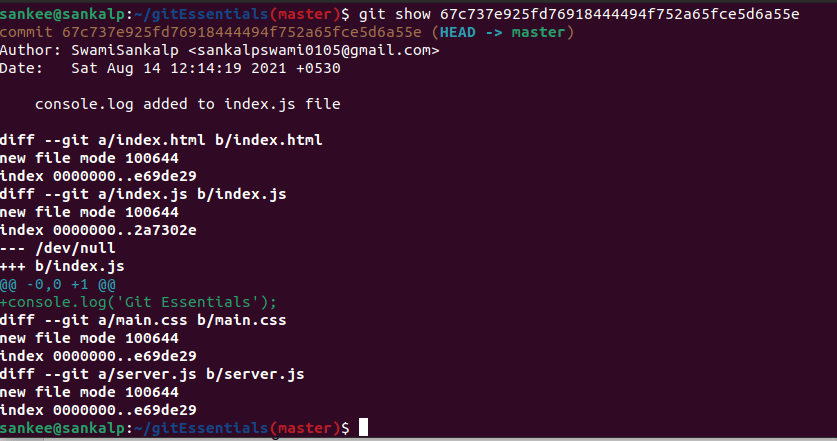 With the help of git show <commitId> command, we can track all the changes commited with that particular commit.
Now if we edit our files, how do we amend the commit. Lets work on it.
First of all we will be editing our index.js file.

Now we will check the status of our working tree.

So now we are getting modified message for index.js file which is unstaged.
Now we will check what changes has been added to the file using git diff command.

So the changes are shown with + sign as we can see it over here +const age = 18.
Let track the file with git add command and then commit it with different message. For changing the commit message we can use the git commit --amend -m "<message>" command

Now if we go for git log command, we will get the following data.

As you can see the message got changed to added const age.
Now we will edit some other files.
add the following command to edit your main.css file.

Yep now we are having two commits in our git logs.

Github is a code hosting platform. It is web-based platform used for version-control. It becomes super handy when it comes to collaborating on projects and working with other people.
Lets add new repository on github which is really easy.
Once you create new repository you go to this page.

This gives the origin the path to store our local repository to the github repository.

Branches are really important in Git, we will talk about it in later part. For now just follow.

This command pushes our local repository to the github repository.

We have successfully added our local repository to github.
Once done, you can refresh your github page, you will find your local repo over ther - 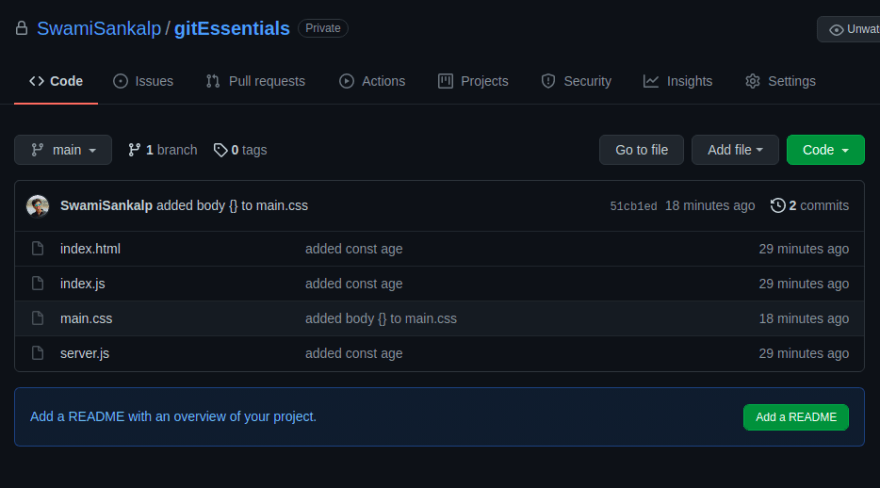 Branches in git are nothing but an independent line of development, ie; When there are multiple developers working on the same project everyone can have their own branches which will keep the code base safe.Git branches come to the rescue at many different places during the development of a project. There is one default main branch. You can add your commited files to your own branches and can submit it to your senior dev for review. If it gets approval then your branch is merged with the default main branch.

As we can see we are having only one branch that is by default main branch.
git branch <branchName> command is used for adding a new branch.

Now you can check branches by the git branch command

We have added a new branch successfully.
You can swithch branches using git checkout <branchName> command.

For pushing your newly added branch to github you can use git push -u origin <branchName> command.

As you can see we have successfully pushed the branch to github.
We can merge both the branches using git merge command.
Now we will be merging our branches.

I hope now we are having a good knowledge about git and github and have gained good practical knowledge to use it efficiently.
Let me know in the comment section if you have any doubt or feedback.

Thanks for reading, keep learning, Peace and Bubbyeye..!
And Yeah! get intoxicated by listening to her

Some Strange Concept of JavaScript

How to Upload Android Studio Project to GitHub?