The first time I ever coded was my junior year of high school.

But let's pretend her name was Javascript:

Pretty soon, I found myself saying "hello" to all kinds of people.

My pal: "You're supposed to use a for-loop for that."

My pal: "It's not too hard. Just make an array of strings, called "names". From there, we make a for-loop:

The variable i will be 0, 1, and 2. You can use it to index into your array to get the name, and then use that name variable so you don't have to duplicate the repetitive 'Hello' part."

The first time I met the for-loop, I had a lot of questions:

Copy-pasting console.log statements was easy! For loops introduced me to a lot of new concepts. After some practice, I became familiar with those concepts.

It wasn't so bad. In no time, I was using them everywhere!

Even better, I got to bring the for-loop with me everywhere I went: Java, C#, Javascript, C, C++.

For-loops were my life. And life was good!

But on a train ride home, I saw an inspirational tech talk by a guy named Evan.

He designed something to make web programming nicer for folks!

The syntax was definitely spooky. It didn't look anything like JS!

But neither did HTML or CSS- and I learned those!

Just like for-loops, it took at bit of practice.

So I followed the official guide, asked questions in the #beginners Slack channel, and even started putting my commas on the left side.

Next thing you know, this HTML template:

Haha, what a breeze!

Wait a minute... look at all that duplication!

Let's hit up the Elm docs to find the function I'm looking for: 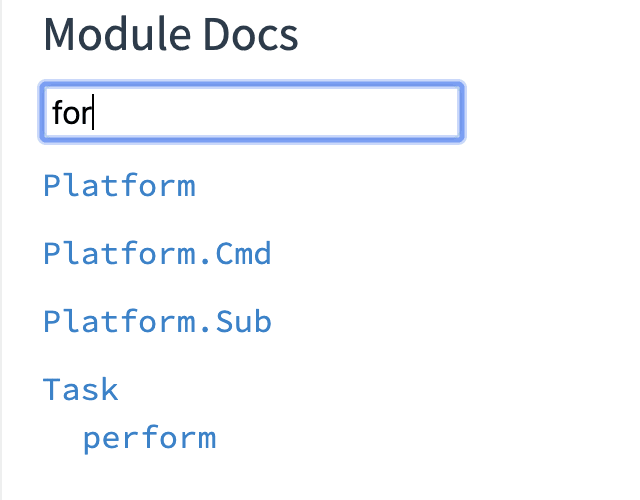 What a rookie mistake.

So I hopped on the Slack, to find out what to do.

A friendly Elm stranger let me know that List.map was the function I was looking for.

(Just kidding, I've never been called a noob on the Elm slack)

A friendly Elm stranger: "Let's break it down a bit.

List.map is just a function, like view or viewParagraph.

It takes in two inputs:

If you give it those inputs, it'll return back a list of "other things".

In your example, you had a list of "strings" you wanted to turn into a list of "HTML".

Just tell List.map how to turn a "string" into "HTML elements" (viewParagraph), and give it your list of "strings" (names).

You'll get back your list of "HTML", and that's what you can print to the page."

After I got some practice with List.map, I started getting the hang of it.

Soon afterwards, I found out JavaScript has the map function too!

And it's been there for a long time!

Elm forced me to use their weird loop thing.

I felt tricked! But then I liked it better.

Now I only use for-loops in blog posts.

I'm glad you forgot the for-loop.

Also your talk was pretty dope.

Thanks for reading! ❤️