What is Canary Deployment?

Canary deployment is a technique to reduce the risk of updating software or introducing new changes in the production environment by slowly rolling out the change to a small subset of users before making the software functional for everyone.

-Allows enterprises to test in production with real users and use cases.
-Enables comparison of different service versions side by side.
Cheaper than blue-green deployments because it does not require two production environments.
-DevOps team can rapidly and safely trigger a rollback to a previous version of an application.

-Scripting a canary release can be complex as manual verification or testing can sometimes become time-consuming.
-Monitoring and instrumentation for testing in production may involve exhaustive research and additional skills & knowledge. 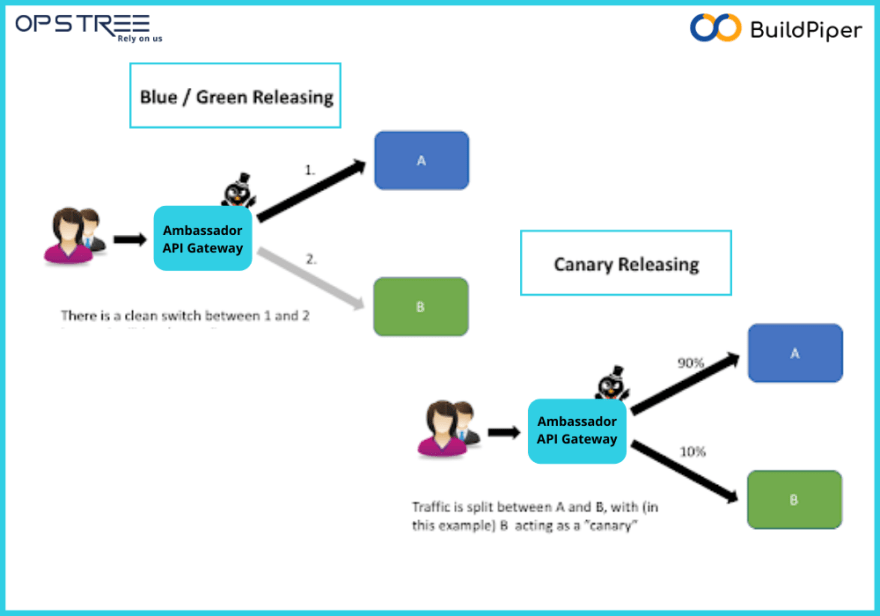 What are Blue/Green Deployments?

-Simple, fast, easy to understand and implement.
-Rollback is straightforward as teams need to simply flip traffic back to the old environment in case any issue arises.
-Blue-green deployments are not as risky and vulnerable to losses as compared to other deployment strategies.

-Cost is the major drawback to blue-green deployments. Replicating a production environment can be complex and expensive, especially when teams have to work with microservices.
-Quality assurance and user acceptance testing may not be enough to identify all of the anomalies or regressions.
-An outage or issue can pose a large-scale business impact before a rollback is triggered.

But, as stated earlier Blue-green deployments require a large budget to accommodate large infrastructure requirements as this strategy requires IT organizations to maintain two identical hosting environments. However, businesses with limited resources or having applications that are modular and configuration-driven can opt for canary deployment.

The argument on Canary deployment vs blue-green is never-ending. No matter, your team goes for Canary deployment or Blue-green, both of these deployment strategies require some pre-planning and thought about the architecture of your business applications and environments before you choose one.

If you plan to execute Canary deployment, the situation might become complicated, especially when Microservices are involved. The whole picture may look dull at first, but with a help of a robust platform such as BuildPiper, you can add colours to it.

BuildPiper is a DevSecOps platformthat can help DevOps team with successful implementation of the Microservices along with Kubernetes management and CI/CD pipeline set up with complete observability, compliance and security.

Explore other interesting features of this Microservices management platform, here! Contact us to schedule a demo NOW!

Read more on Canary Deployment, its different stages and much more, here in this blog!

A Detailed Guide to Canary Deployments!

How to Scale an ASP.NET Core Microservice and Sharded Database. Load Test with JMeter

Once suspended, ruchita_varma will not be able to comment or publish posts until their suspension is removed.

Once unsuspended, ruchita_varma will be able to comment and publish posts again.

Once unpublished, all posts by ruchita_varma will become hidden and only accessible to themselves.

If ruchita_varma is not suspended, they can still re-publish their posts from their dashboard.