Microservices have become a standard approach for enterprise app development and many newly built applications are natively adopting its core principles. But migrating business apps to the cloud isn’t as easy as it sounds to be.

Here are 5 common pitfalls that can hinder the migration process.

Rushing into microservices adoption is one of the most common mistakes that IT teams often make. Performance issues and functionality problems arise when microservices migration is done without the right strategy and adequate infrastructure investments in hand.

If services are too small, DevOps teams may end up using more services than they can actually manage. Each microservices being deployed in a separate container can create considerable overhead which can hinder the automation of other crucial tasks.

Software teams tend to commit the mistake of keeping the services coupled too tightly, similar to a monolithic design. On the contrary, in a Microservices architecture, services exist as independent entities that aren’t dependent on each other to function.

Logging becomes too complicated in Microservices especially when coders place these logs inside individual container instances. These instances are hard to find, and logs stored in a short-lived container get deleted, once the container is terminated.

Since Microservices components are developed on completely different technology stacks, these distributed and communicating services with dissimilar stacks make it difficult to detect where exactly the issue was originated. 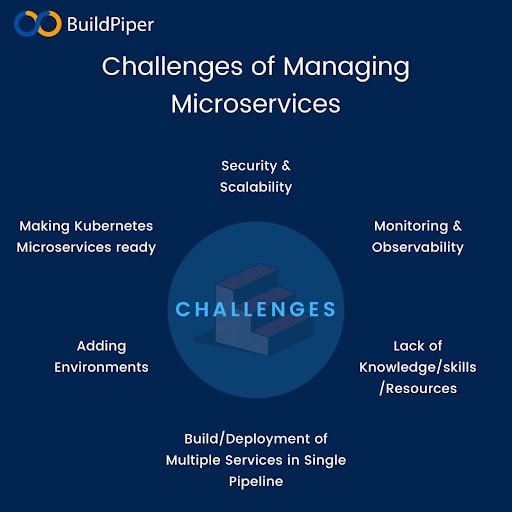 With out-of-the-box capabilities such as Managed Kubernetes, Managed Microservices, Secured CI/CD Pipelines, Security, Observability & Compliance- BuildPiper has evolved as the Most Powerful Microservices Delivery Platform in the industry today!

BuildPiper helps in delivering dockerized code along with enhanced functionalities right from a coder’s workstation to the scalable, secured and standard production environment in under a day through its incredible functionalities that include,

Explore more about BuildPiper and its other interesting features here. Schedule a demo TODAY!

KubeMQ: A Modern Alternative to Kafka

Getting Started with Kubernetes