Learn the difference between RS256 and HS256 JWT signing algorithms.

When you create JSON Web Tokens, they are signed. Signing the token allows its recipient to validate that the content of the token wasn't changed and verify the original issuer of the token created signature.

Heads up! Signatures are not encryptions!

Signing JWTs doesn't make their data unreadable. Signatures only allow verification that the content of the JWT was not changed.

The signature is the part of a JWT that verifies the content of the JWT hasn't changed since the moment it has been issued (as it would happen, for example, in person in the middle attacks).

RS256 and HS256 are the most common algorithms used for signing JWTs. This article will go over some differences between RS256 and HS256. This post will not cover the other JWT signing algorithms, such as ES256 or PS256.

What are JWT signatures?

Signatures are created by combining encoded versions of the header and payload of a JWT, passing them and the secret as parameters into the algorithm defined in the header.

The following is an example code that can be used to create a JWT signature.

The following is an example output of what the signed JWT looks like:

Each section (header, payload, and signature) is separated by a period (.).

The following picture highlights the signature part of a JWT decoded via jwt.io: 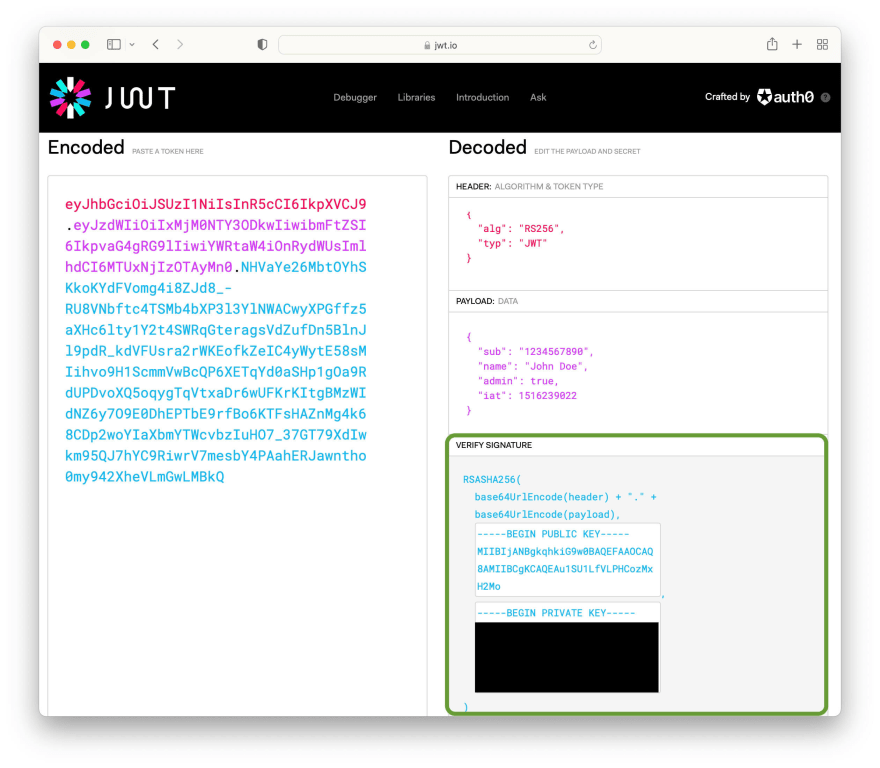 That leaves you with the question:

What's the difference between RS256 and HS256 signing algorithms?

Once suspended, robertinoc_dev will not be able to comment or publish posts until their suspension is removed.

Once unsuspended, robertinoc_dev will be able to comment and publish posts again.

Once unpublished, all posts by robertinoc_dev will become hidden and only accessible to themselves.

If robertinoc_dev is not suspended, they can still re-publish their posts from their dashboard.