I haven't talked much about game specifics and that's because I still only have a rough idea of the core loop and various mechanics. I don't want to overplan; I've done that before and it doesn't seem to work for me. I'd rather have it all develop in a more "organic" way. Even if it means I have to rewrite a some code now and then.

So, the core loop is about collecting resources and use them to build production lines that in turn produces other stuff that you use to build even more production lines, ultimately yielding a lot of stuff that you then send off the map in order to fulfil various objectives dictated by a game "director" disguised as some sort of interstellar planetary exploitation company.

That's a long sentence. I guess I need to work on that elevator pitch..

Anyway. For now let's focus on the idea that you start on a map with various resources, some obvious and some hidden, and start building machines to harvest resources and produce stuff.

A Factorio player might think along the lines of miners, furnaces and assemblers. That's what I'm thinking too, but I want to make it a little different..

The game will have a range of building blocks - I'm calling them units. What's a unit?

My intention is to let players design their factories in interesting and elaborate ways. So there will be a lot of "most efficient" ratios of input vs operating speed, energy consumption etc to figure out.

I'm thinking yes, there should be a tech tree. Throwing every possible unit at the player from the very start is going to be a bit overwhealming. Unlocking tech should be one of the main incentives to keep the player completing objectives.

This is a big one and something I have to consider carefully and constantly be tweaking. As of right now, all I've got is that some units will be difficult or expensive to build and/or to operate. The player will often have to decide between using resources to complete objectives or to build that next unit and expand the production line. Maybe, just maybe, the director will throw random challenges at you as well. E.g. you can't use this unit, or you can only use this unit so many times.

There is a chance that this method of building isn't going to be fun. That's something I have to get verified as soon as possible, and that's why I've started prototyping the actual usage of units in the game. I've made some programmer art and hooked it up in game, but there's no UI or any of the supporting systems (like actual map resource generation or objectives). So there's still some way to go. 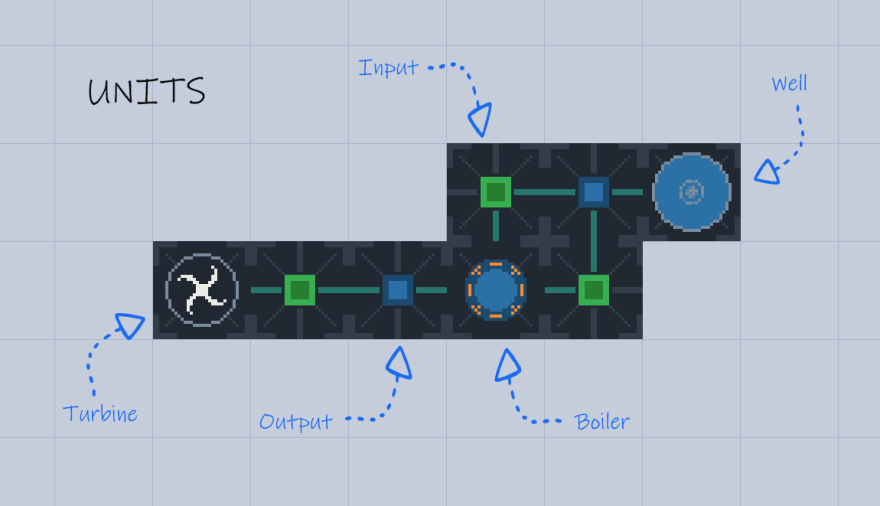 I think you should be able to figure out what this small circuit does. It's not what you would consider a complete circuit, because the turbine produces something. But that's what I have right now.

Let me know what you think.

A Simple and Effective Guidance System for Crowd Simulation