Digital transformation, and the results of it, are nothing new — yet with the Covid-19 pandemic of 2020, it can feel like the latest business buzzword appearing in every corporate monthly magazine and hot on the lips of every senior executive. In fact, one could wager that Apple’s introduction of the iPod represents, among a certain age demographic, their first time witnessing digitalization really disrupting an industry — it changed the way the ‘man on the street’ consumed entertainment.

A total game-changer, the transformation of the music industry was a precursor for a lot of what we witness on the high street and wider society today — for better and for worse, one could argue. Indeed, while many reap the benefits of industry digitalization when it comes to easier banking processes, or ordering a taxi from their phones — many blue-collar workers are facing uncertainty with the automation revolution closer than many think.

AN ERA OF UNPRECEDENTED TRANSFORMATION

Even before this year’s COVID crisis, new or changing technologies and ways of working were disrupting industries and jobs, plus the skills that employees need to possess in order to do them. As far back as 2017, the McKinsey Global Institute estimated that as many as 375 million workers — or 14% of the global workforce — would have to change occupations or acquire new skills by the end of the current decade because of automation and AI.

Covid-19 has accelerated what was already a fast-moving trend. In order to remain competitive, businesses across industries have been digitizing their offerings, and digitalizing their internal processes for staff and external buying options for customers. Whether that’s all-digital HR functions so employees can request leave, inform about sickness, and have an overview of team absence — or Original Equipment Manufacturers such as automakers allowing prospective buyers to choose, customize (and even virtually test drive), and purchase vehicles entirely online.

Both of these examples are net wins for both employee and the consumer, but things aren’t as rosy for workers in jobs that can be done either by machines directly, or automated processes — streamline operations so businesses can become more cost-effective.

Many US coastal journalists felt the ire of heartland America when they suggested coal miners should “learn to code” in the face of widespread job losses, perhaps pointing to a disconnect between those who live in larger metropolitan areas and those in rural communities with the less digital industry. However, in reality, it isn’t only blue-collar workers who should be concerned with the rise of the robots. In industries such as logistics, artificial intelligence may feasibly replace many human positions in the not-too-distant future. Which begs the question… How important is reskilling for digital transformation as we head into this uncharted territory? 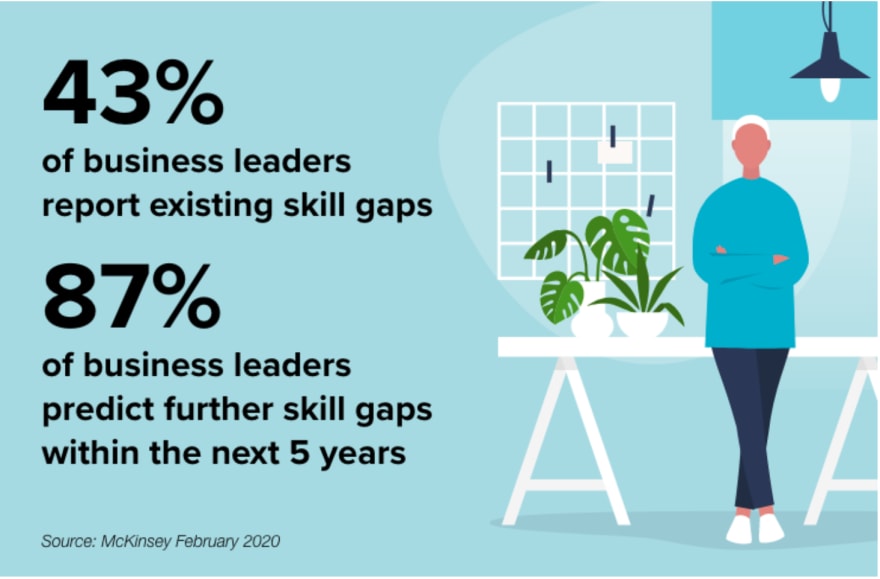 If we look back to McKinsey again, their February 2020 survey revealed that 87% of the executives and managers asked said their organizations either have skill gaps already — or expect them to develop between now and the middle of the decade.

With an April Gartner study showing that 75% of CFOs intend to keep at least 5% of their workforce permanently remote, and companies such as Facebook and Slack declaring their intention to allow permanent remote working for nearly all their staff — a seismic shift that was perhaps inevitable in time has been pushed to the forefront with immediacy and some may say necessity.

One possible answer to the automation question is building educational solutions to reskill a workforce that doesn’t fit into common assumptions and requirements of the average tech worker, such as truck drivers. They make up 2% of the US workforce, and it’s the most common job in 29 of the 50 states. In Europe, they’re predicted to be among the most impacted professions as we globally migrate to a more automated economy, according to research conducted by The Guardian.

“Don’t wait until self-driving trucks are a common sight on the highways to start building skills for your next job. Start doing it this year, so you will be ready when the time comes.” — Stephane Kasriel, CEO, Upwork

While it might seem fanciful to expect middle-aged drivers to reskill to a totally different area, it’s certainly likely that autonomous trucks will require human assistance for the foreseeable future so there will definitely be transferable skills — though of course, large scale disruption is inevitable.

COVID AS A DRIVER OF CHANGE

The coronavirus pandemic has pushed this issue even further to the forefront. Workers across industries need to figure out how they can adapt to ever-changing conditions, and businesses need to learn how to match those staff members to new roles and activities. That said, reskilling for digital transformation (and upskilling) is not a new idea. Digital transformation and artificial intelligence have been a growing part of the business for years — though it is without question that the pandemic has significantly accelerated the adoption of technology.

Discover more to know how reskilling for digital transformation has become a necessity as businesses enter an unprecedented age of AI and automation.

How to Convert Text to Number or Number to Text in Excel 365?

Insert Blank Rows or Columns Every Other Rows/Columns in Excel 365!!

Formula to Count Number of Weekends/Weekdays/Specific Day of Week!!

Excel Formulas to Add Hours/Minutes/Seconds to a Datetime!!