bff has no strong binding relationship with node, but it is too expensive to let front-end personnel familiarize themselves with backend language learning other than node. Therefore, we use node as the middle layer on the technology stack, the http Framework of the node uses nestjs.

BFF(Backends For Frontends) is the backend that serves the front end. After the baptism of several projects, I have some insights into it. I think it mainly has the following functions:

Although BFF is popular, it cannot be used for popularity. It can only be used when it meets certain scenarios and the infrastructure is perfect. Otherwise, it will only increase project maintenance costs and risks, however, the profit is very small. I think the applicable scenarios are as follows:

I will introduce Nestjs from the perspective of a pure frontend entry-level backend Xiaobai.

Nest is a framework for building efficient and scalable Node.js server-side applications.>

What does the backend do after the front-end initiates a request?

First, we initiate a GET request.

Assume that the nginx proxy has been configured (all requests starting with/api are sent to our bff service), and the backend will receive our requests, then the problem arises, what is it received through?

First, initialize a Nestjs project and create a user directory. The directory structure is as follows:

Nestjs receives requests through routing at the Controller layer. Its code is as follows:

Let's improve the above code, add a Provider, and create user.service.ts under the current module.

Then our Controller needs to make some changes

In this way, one of our business modules is completed, and only user.mo dule.ts is introduced into the general module of the project. After the project is started, you can obtain the data by accessing '/api/user'. The code is as follows:

Through reading the above, we have learned how the process of running a service and the nestjs interface correspond to data, but there are still many details that have not been mentioned, such as a large number of decorators (@ Get,@ Req, etc.), the following will explain the commonly used modules of Nestjs

Controller, Provider, and Module have been mentioned above, so we will not explain them again here. NestFactory is actually a factory function used to create a Nestjs application, which is usually created in the portal file, this is the main.ts, the code is as follows:

Decorator is a common function in Nestjs. It provides some decorators for common request bodies. We can also customize decorators, you can easily use it wherever you want. 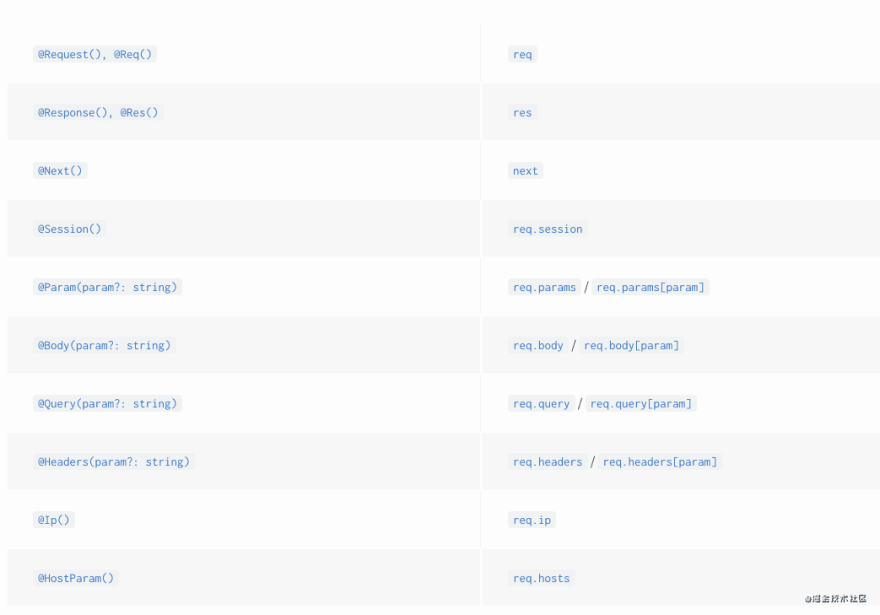 In addition to the above, there are also some decorators that modify the internal methods of the class. The most common ones are @ Get(),@ Post(),@ Put(),@ Delete(), etc, I believe that most frontend users can understand the meaning of these methods that are used to modify the interior of Contollor, so they will not explain them any more.

Take cookie formatting as an example. The modified code of main.ts is as follows:

Nestjs has a built-in exception layer that handles all thrown exceptions in the entire application. When an unhandled exception is captured, the end user will receive a friendly response.

As a frontend, we must have received an interface error. The exception filter is responsible for throwing an error. Usually, our project needs to customize the error format and form a certain Interface Specification after reaching an agreement with the frontend. The built-in exception filter provides the following format:

On the basis of this project, we added a common folder, which stores some filters, guards, pipelines, etc. The updated directory structure is as follows:

We add the http-exception.filter.ts file to the filters directory.

Next, we bind to the global and change our app.mo dule.ts again.
app.module.ts

In this way, the initialized project has custom exception handling. 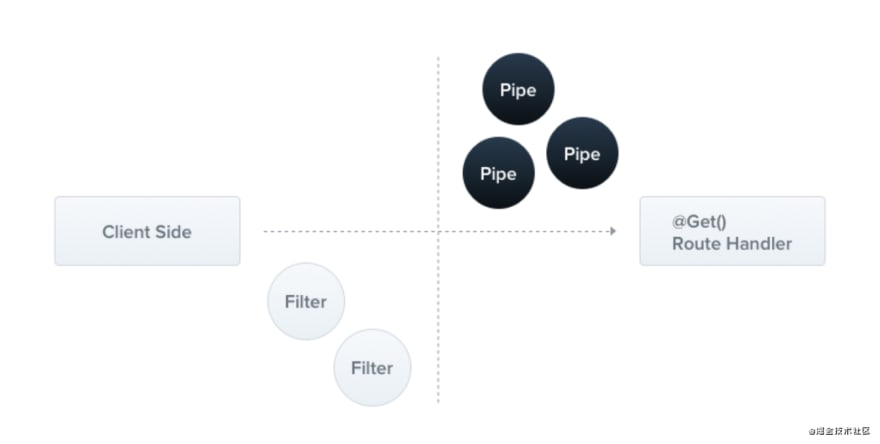 This part is difficult to understand only in terms of name, but it is easy to understand in terms of function and application scenario. According to my understanding, pipelines are some processing programs for request data before Controllor processes them.

There are not many scenarios for data conversion applications. Here are only examples of data verification. Data verification is the most common scenario for middle-end and back-end management projects.

Generally, our Nest application will cooperate with class-validator for data validation. We create validation.pipe.ts in the pipes directory.

Then we bind this pipeline globally. The modified app.mo dule.ts content is as follows:

In this way, the data verification function is added to our application. For example, to write an interface that requires data verification, we need to create a new createUser.dto.ts file, which reads as follows:

Then we introduce it at the Controller layer. The code is as follows:

If the parameters passed by the client do not conform to the specifications, the request directly throws an error and will not continue processing.

Guard is actually a route guard, which protects the interfaces we write. The most common scenario is interface authentication. Generally, we have login authentication for each interface of a business system, therefore, we usually encapsulate a global route guard. We create auth in the common/guards Directory of the project. guard.ts, the code is as follows:

Then we bind it to the global module. The modified app.mo dule.ts content is as follows:

In this way, our application has the function of global guard.

As can be seen from the official figure, interceptors can intercept requests and responses, so they are divided into request interceptors and response interceptors. Currently, many popular front-end request libraries also have this function, such as axios,umi-request, etc. I believe that front-end employees have contacted it. It is actually a program that processes data between the client and the route.

Interceptor has a series of useful functions, which can:

Next, we implement a response interceptor to format the global response data and create a new res.int erceptors.ts file in the/common/interceptors Directory. The content is as follows:

The function of this response guard is to format the data returned by our interface into {code, data} format. Next, we need to bind this guard to the global, modified app.mo dule. The ts content is as follows:

In this way, the response format of all interfaces of our application is fixed.

After a series of steps above, we have built a small application (without logs and data sources), then the problem arises, how does the application process and respond to data step by step after the frontend initiates a request? The procedure is as follows:

The routing processing function at the Controllor layer calls the Provider, which is responsible for obtaining the underlying data and processing the business logic.

Through the above, we can have a basic understanding of the concept of BFF layer, and we can build a small Nestjs application by ourselves according to the steps, but there is still a big gap with enterprise-level applications.
Enterprise applications also need to access essential functions such as data sources (backend interface data, database data, and apollo configuration data), logs, links, and caches.

Token based authentication in nodejs

Which frameworks do I use for Arbington.com?

qiuzhi99
Programmers who enjoy sharing articles and videos on cutting-edge front-end and back-end programming techniques
How to Create a Notification/Toast using React and Tailwind
#react #css #javascript #nextjs
🤷‍♂️ Chrome just changed emojis to outlines in headings? 🤷‍♂️ I have a fix for your site! 💪
#discuss #webdev #css #codepen
What is dev.to for?
#watercooler #discuss #beginners