The process seems very simple. But when I first implemented Google log-in for my web app, I realized there was much more going on behind the scene. I decided to implement it with the help of an authentication middleware known as Passport.js.

Based on what I learned, this article will take you through the process of using Passport.js to set up Google OAuth for an Express.js web application. Please note that this article will not cover any EJS template and refactoring process.

You'll need to have:

This collection is for storing users' Google ID so that the app will be able to associate resources (such as posts) with these users and to identify them after they sign out and sign in again.

If they have been installed, the result will be similar to the following.

If the result is empty, run the following command in your terminal to install them.

The following flow chart shows the big picture of OAuth flow, from the developer's perspective. 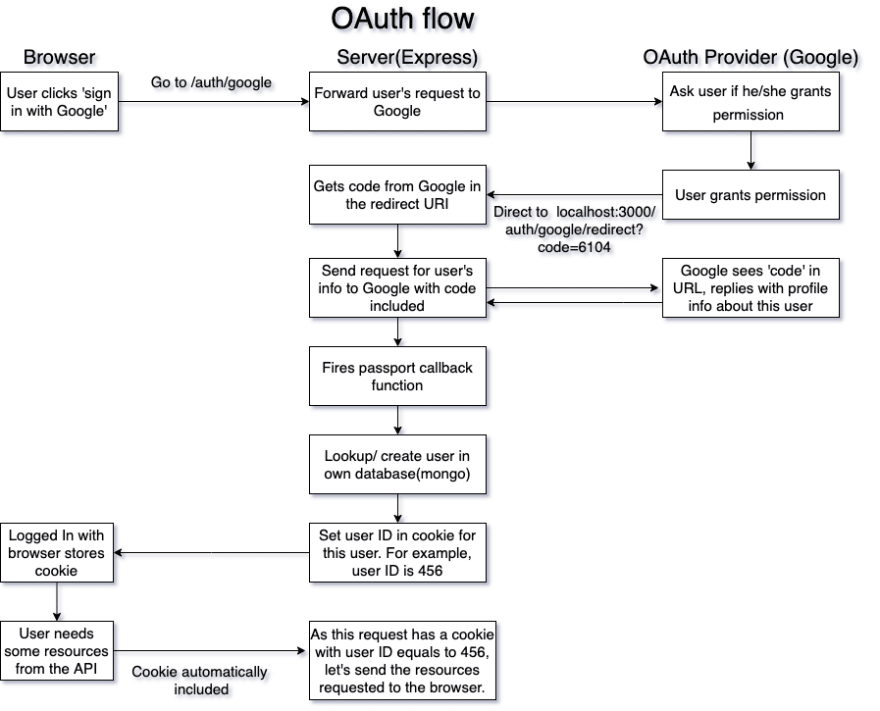 We will discuss these steps in a moment. To kick things off, first we need to set up Passport and configure its strategy.

To set up Passport, you will need to require both Passport and Passport-Google-OAuth2.0 and instruct Passport to use a new instance of Google Strategy.

Preparation Step 2: Getting credentials from Google

In order for Google to identify which application's Passport interacts with their API, you will need to obtain clientID and clientSecret in Google Developers Console. You may refer to this guide for the steps.

For security, before hooking the Google credentials to our Google strategy, we need to save them in a keys.js file of config folder. We should add this file to gitignore so that it won't be committed to Git.

The next step would be requiring the keys file we just created in app.js as well as configuring Google Strategy by hooking it to your Google credentials and Authorized redirect URI you just created in the Google Developers Console.

For now, don't worry about the second argument accessToken - I will explain in implementation Step 3 below.

Now let's go over the basic OAuth flow again. I've included code snippets to show how to implement the flow.

Implementation Step 1: When user clicks "Log in with Google"

The app then hands control to Passport to communicate with Google to handle authentication. User will be directed to the Google page asking for user's permission.

Passport has already been set up previously so it will start the OAuth flow.

Implementation Step 2: After user clicks "Allow" on the consent screen

The page will redirect to your redirect URI which you set up in Google Developers Console. The URI also contains a code from Google, which will be used by Passport to request Google for user's info.

Implementation Step 3: When Google replies with the user's profile info

The server fires passport callback function, which looks up or creates user in our app's database.
Since we only want one user record no matter how many times the user signs in, first our app needs to check whether our database already has this user with the given Google profile ID. If the answer is yes, we can skip creating a user in our database. However, if it's not the case, we need to create a new user.

To achieve this, we need to modify the passport callback function to the following. We also need to require mongoose and the users model of our database.

A quick explanation of the arguments in the callback function:

In other words, Passport generates some identifying token, stuff it inside a cookie and send to the user's browser.
user in the code refers to the user model instance we just looked up or created in our database, whereas user.id is the ID assigned by Mongo, instead of Google profile ID.
Imagine a scenario when the user can log in your app with Facebook or Twitter account apart from Google. That means he/ she can be logged in without a Google ID. That's why we use user.id instead of Google ID in the serializeUser function.

Implementation Step 5: Later the user needs some resources from our app on the browser, say, asking for some posts...

the cookie will be automatically added to the request sent to the server. Server will then take the identifying token from cookie, pass into deserializeUser function to turn it into a user.
Passport then figures out the user has already been authenticated and directs the server to send the requested posts to the user's browser.

Implementation Step 6: Instruct Passport to use cookies to handle authentication for us

First, let's install cookie-session by running the following command in the terminal.

We then need to require cookie-session in our app.js file.

Next, let's create a key to encrypt the cookie and store it inside keys.js file in config folder. The key can be any random characters.

After this step, let's add the following to your app.js file to tell your app to use cookie session and to tell passport to use cookie-session to handle authentication. maxAge refers to the milliseconds of the duration that the cookie will last.

Implementation Step 7: Test if it works!!

User model instance we got from deserializeUser function is now added to the req object as req.user .

We can make use of req.user to test if the whole OAuth works.

First, we can modify the callback route for Google to redirect to to the following.

Then, we set up a logout route.

To test, let's restart the server and go to http://localhost:3000/auth/google.
If it works, you will be directed to Google consent screen.
After you click "Allow", you should be able to see req.user object which contains information that you set up for your user model (i.e. at least google ID) and the message "you reached the redirect URI".
To check if logout function works, you can go to http://localhost:3000/auth/logout. If you don't see any req.user object, it means the cookie has been destroyed and now you logged out!

🎉🎉🎉 Congratulations! We did it! We have successfully used Passport.js to set up Google OAuth in our web application.

Is 0kb of JavaScript in your Future?