In a recent meetup organized by GeoPune at OLA Campus Pune, I came across Dhruva Rajan’s talk about his experience at the State of the Map 2022; as a newbie in the maps, I was not aware of how vast and extensive the mapping community is. OpenStreetMap (OSM) is a free, editable, and open-source geographical database. Folks can literally map their own perspective of the world.

As I was new to the mapping community, I explored OSM further and got familiar with it. In this blog post, I will note down my key takeaways & experiences learning & working with OSM

OpenStreetMap is a collaborative project to map down the world. OSM is being continuously built & updated by volunteers all around the globe. The geographical data underlying the maps are considered the primary output of the OSM Project.

It was an initiative of Steve Coast in 2004; surprisingly, they’re still hosted on a bunch of servers & not on the cloud. The data is 100 percent crowdsourced and is available for everyone to use under an open-source database license.

It started as a personal project and is now a community-driven initiative with 91 million contributors worldwide.

How does one contribute to the open street map?

Since the whole initiative is community-driven & open source, there is much to contribute. The most common way is to contribute map data and edit existing maps, although you can contribute by making software, reporting issues, or even a small donation.

I thought of contributing map data to OSM but I was confused; Chinmay Shaligram, Who is an active OSM Contributor at the Ola Campus Pune, helped me with a quick Maps 101, which I believe is required to contribute to the map data.

Every map is divided into three broad categories, namely

Points are an intersection of latitude & longitude representing a place or a point of interest. While lines represent roadways and rivers, the whole polygon represents any active region like a playground, pond, etc. You can learn more about basic GIS Terminology via this link.

The iD editor requires you to have an active internet connection to contribute to the map data.

Step 3. Open the Map Editor on the Open Street map.

Here is the basic explanation of the OSM Map editor:

1 → Edit Feature Panel: This panel shows tags from the object selected on the map.

4 → Information panel: This panel shows various information, such as the scale bar and which users have contributed to the area.

Step 4. Look for areas you can edit or contribute to

Step 5. You can use the search bar to search faster

Step 6. Multiple background layers can be applied in order to better identify on map 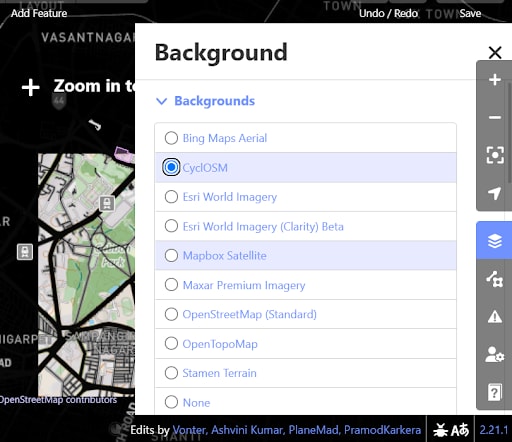 Step 7. Zoom in to the area that is being edited
Step 8. Click on Points/paths/areas based on the need

The play area is identified & was not on the map, hence we have added it using the drag and drop editor.

After one is sure about the edits they can push them into the main OSM Database using the arrow provided in the top right corner.

Add your comments & you’re good to go. There are multiple other ways to contribute map data to OSM. Please refer to this page in case you want to know more

Since the open street map is a community-driven project there are a lot of communities that are active and you can make contributions to a few that have been listed below:

There are many other communities based on your geographic location. Find here

The future of OpenStreetMap

OSM is growing at a swift pace, they have over 91 million contributors worldwide, As described by Dhruva from his experience in SOTM, there are multiple things they are working on, but the primary focus right now is on these two:

OSM has been the oldest and the wealthiest crowdsourced geographical data, with many platforms building geocoding engines built upon OSM. Many good APIs like grasshopper for routing is built over the data provided by the Open Street map.

Many companies like meta, Esri & Microsoft contribute to open stack via Open Street map.
During the GeoPune session, I asked Dhruva why are these big MNCs contributing to the Open street map - He replied

The more closed source you become, the farther you are from the community

Here is the link to his talk if you want to listen.

This is true; these MNCs have understood that by being away from these communities, they’re missing a lot.

What are AWS credentials?

Once unpublished, this post will become invisible to the public and only accessible to Khalid🥑💻.