I released a npm package in public for my Static Site Generator(SSG)! I was very surprised and impressed that I could do that like other packages that I used before💮

npm is the package manager for the Node JavaScript platform. My SSG uses JavaScript, so I decided to use it to release my package.

How did I create a package?

First of all, I opened Windows PowerShell and went to my SSG folder. Second, I typed npm login. It allowed me to enter Username, Password, Email. After I verified my email address, I could get this page:

Tags can be used as specific points in history in open source projects to help users in the repository easily navigate to important parts of the code history.
I added v0.9.0. as a practice, and then created a v1.0.0 release with git tag -a v1.0.0 -m "my version 1.0.0" and checked all tags I added with the git tag command. My original release number was v0.1.0, so I changed package.json, yarg, README files to modify my version. After I added those files, commit, and push, I also pushed tags to main with the git push --follow-tags command.

Published my public package to the npm registry

Based on the npm document, the way to publish a package is using npm publish command. When I run it, I had the error below:

I firstly thought someone used the same name of the package, but it was just the name I didn't change inside the package.json file when I did npm init.
I changed name from node-ssg to pajama-ssg, and successfully released!

My partner Gustavo tried to install and run my program, but it failed. The error message said it was caused by prettier. Since I moved prettier inside the devDependencies instead of dependencies in my package.json file. I corrected the location and pushed to git, and I updated the npm version number with the npm version 1.0.1 command. Then I published it again.
He could run my program and I also could run his program. 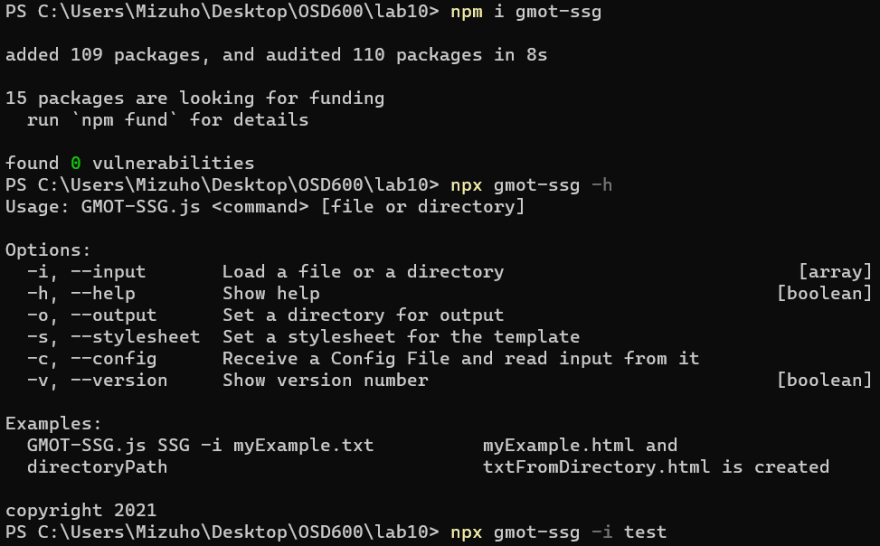 However, I couldn't see any files in my directory where I installed Gustavo's package, the node_module folder was installed globally(under my C drive). Another friend, Kevan helped me and suggested to do npm install inside the directory. It created a package.json and I did npm i <packagename> again, then I finally had the files inside the directory🎉

I modified those files and their contents to match by installing the npm package. The installation and usage became simpler. When I modified the README file, I didn't pay attention enough and realized that I had to change the CONTRIBUTING file as well. Because of my small changes, my release number grew to v1.0.4. I learned that I needed to think more about the affected area😅

I didn't expect that I could release a npm package in public. Through this course, I'm having good opportunities to communicate with other programmers(students, people online, professors) and experiences to publish in public such as this blog, a npm package, my open source project, and PRs. I'm a shy person so all of these social aspects are new to me, but I feel I'm getting more comfortable with all of it(I hope!)🌟

My npm package: pajama-ssg
All you need is npm i pajama-ssg, and run npx pajama-ssg -i <file name>.
File name is your text or markdown files that you would like to convert to html. Please store a file(s) inside the project folder.

Oh! You are the person who filed the issue! Thank you for looking at my code😆 I will check the link you mentioned and implement Regex for it!

Get your GitHub 2021 year of contributions in 3D