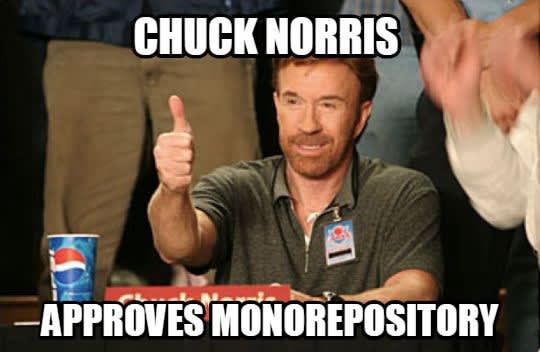 Whenever you start a new project, one of the first decisions we made is the structure of our code base. This is important because we do not want to have spaghetti code, features breaking when code changes... A few years ago, I worked in a project that comprises several apps with shared libraries. At first, everything was fine: apps were very small, few requirements; but every small app converts into a big one. The problem appeared when the first critical bug was reported. The typical steps to solve any bug were:

Obviously, if something went wrong we have to repeat some of these steps. This process may be a pain in the ass when you have to update several applications. On the other hand, you also have to be aware of the applications that are using the affected library. I wasted a lot of time upgrading libraries, so I decided to look for a better way to deal with this problem: the monorepository. The main advantages of this approach are:

This approach is followed by Google and Facebook, among others. So, if you did not know it, you should give it a try! To help us with this task, the guys from Nrwl have created NX.

NX is an extension for the @angular/cli that implements the monorepo-style development. It provides a set of code generators, libraries, linters… 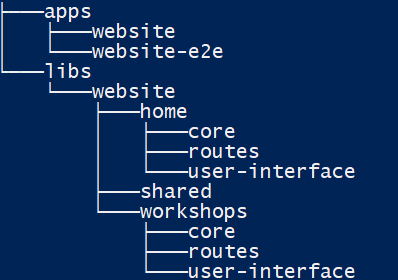 In the libs folder, there is a “three level” directory tree.

This architecture follows these rules:

To be consistent and make sure that we are following correctly the layered architecture, NX provides us a lint rule: “nx-enforce-module-boundaries”. To make it works, we have to set up some tags in every library. Those tags are set up in the nx.json file:

For this example, I have used the tags:

Once we have set up correctly our nx.json file, we have to add the “nx-enforce-module-bundaries” rule to our tslint.json file.

With this simple configuration we achieve the following goals:

If you try to import a user-interface library from a core lib you will see the following error message:

NX enforces quality and consistency when we develop our apps. It gives us some good practices that we should follow when we are developing our apps!

Come hear top community speakers, experts, leaders, and the Angular team present for 2 stacked days on everything you need to make the most of Angular in your enterprise applications.
Topics will be focused on the following four areas:
• Monorepos
• Micro frontends
• Performance & Scalability
• Maintainability & Quality
Learn more here >> https://enterprise.ng-conf.org/

It’s ok to use function calls in Angular templates!

Once suspended, ngconf will not be able to comment or publish posts until their suspension is removed.

Once unsuspended, ngconf will be able to comment and publish posts again.

Once unpublished, all posts by ngconf will become hidden and only accessible to themselves.

If ngconf is not suspended, they can still re-publish their posts from their dashboard.

Once unpublished, this post will become invisible to the public and only accessible to ng-conf.

Thanks for keeping DEV Community 👩‍💻👨‍💻 safe. Here is what you can do to flag ngconf:

Unflagging ngconf will restore default visibility to their posts.