Isolating features into different branches is a crucial practice for any serious developer. By separating each feature, bugfix or working experiment you will avoid a lot of problems and keep your development branches clean.

At some point, a piece of code will reach a state where you'll want to integrate it with the rest of the project. This is where the git merge command comes in.

Let's assume that we want to merge branch hotfix into your master branch.

Before we start, how to make sure that you are ready to merge your changes?

Once the preparations are completed, you can start the merge with git merge hotfix command.

A fast-forward merge can occur when there is a linear path between branches that we want to merge. If a master has not diverged, instead of creating a new commit, it will just point master to the latest commit of the hotfix branch. All commits from hotfix branch are now available in master. 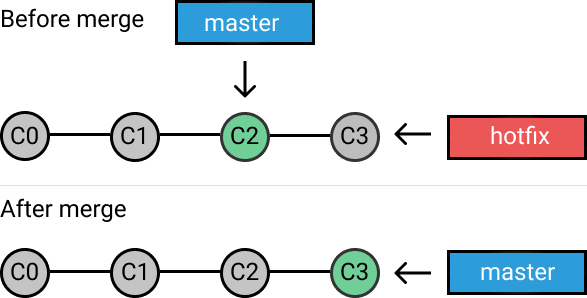 However, a fast-forward merge is not possible if the branches have diverged. In this case, you want to use a Three-way merge.

When there is not a linear path to the target branch, Git has no choice but to combine them via a three-way merge. This merge uses an extra commit to tie together the two branches.

Test this out! Create your own project with an RSpec test branch and at the same time edit the Controller tests in master. Now, try to merge.

How to Deal With Merge Conflicts

A merge conflict occurs when two branches you're trying to merge both changed the same part of the same file, Git won't be able to figure out which version to use.

For example, if the file example.rb was edited on the same lines in different branches of the same Git repository or if the file was deleted, you will get a merge conflict error when you try to merge these branches. Before you can continue, the merge conflict has to be resolved with a new commit.

Merge conflicts will only occur in the event of a 3-way merge.

Hope this helped you get a better understanding how to merge your branches and deal with conflicts.

Commit message with title and body with one-liner git command

⚙ This new GIT push config will save you lot of frustration!

my git aliases: amend and append

Once suspended, neshaz will not be able to comment or publish posts until their suspension is removed.

Once unsuspended, neshaz will be able to comment and publish posts again.

Once unpublished, all posts by neshaz will become hidden and only accessible to themselves.

If neshaz is not suspended, they can still re-publish their posts from their dashboard.

Once unpublished, this post will become invisible to the public and only accessible to Nesha Zoric.

Thanks for keeping DEV Community 👩‍💻👨‍💻 safe. Here is what you can do to flag neshaz:

Unflagging neshaz will restore default visibility to their posts.