In Azure DevOps, Pipelines Decorators allow you to execute a series of predefined steps for your CI/CD workflows in your organization. They are essentially a section of the YAML file that will be executed for every pipeline.

Let's see what they are, how they work, hot to build and publish them and how to use them.

If you are a visual learner or simply prefer to watch and listen instead of reading, here you have the video with the whole explanation, and of course the end to end examples of Pipelines Decorators

I think we all know Azure Pipelines, the service in Azure DevOps that you can use to automatically build, test and deploy your applications. It works with just about any language or project type.

We can categorize the Pipelines in 2 main categories:

This distinction will be important in a moment.

To work in pipelines, you just create Job and add a series of Tasks to it for all the operations you want to perform.

You want to build your Java application? Add the build task.
Test your dotnet core project? Add the dotnet test task.
Scan your code for vulnerabilities? Add one of the many first and third party tasks.
Deploy your microservices to Kubernetes? Add the specific task.
And so on.

But what if you want all of your pipelines to mandatory execute some tasks, withouth anyone being able to "skip" them?

Pipelines Decorators are the answer.

In fact, Pipelines Decorators allow for adding steps to the beginning and/or end of every job. This is different than adding steps to a single definition because it applies to all pipelines in an organization.

The tasks defined in a Pipeline Decorators are automatically injected to all your pipelines, and of course you can control that with some conditions.

The Build Decorators apply to Classic Build Pipelines and to the newer YAML Mulstistage Pipelines.

The Release Decorators, instead, apply ONLY to the Classic Release Pipelines.

YAML Pipelines can be used for deployment as well, so how does this work?

Well, actually the "Build" Pipeline decorator type applies to the Deployment Jobs of the YAML Pipelines as well.

I know, this is a bit confusing, but the reason for that is that the YAML Pipelines evolved from the Classic Build ones and therefore they share the same extensibility point.

So, out of the box, when you create a Build Pipeline Decorator it will apply to both the Normal Jobs, which are usually used for CI, as well as the Deployment Jobs. You can change that behaviour using some conditionals, and I will show you in a minute how we can do that.

Another thing you need to decide, when creating your Decorator, is when its tasks have to be injected into the Pipelines.

But how can we create a Pipeline Decorator?

The main file is a YAML file, where you actually write your tasks like in a normal YAML Pipeline.

The second file is a JSON file that contains all the properties and specifications for your Decorator, like what it targets (Build or Release) and when to inject the tasks.

Decorators use the normal Azure DevOps extensibility points, which means you need to package them as Extensions.

After that, you have to upload this extension into the Marketplace and share it with your Azure DevOps organization. Remember that only private extensions can contain Decorators.

Finally you will have to install the Extension in your organization and, when completed, the Decorators will automatically be injected in all your Pipelines.

This is the GitHub repo I created for showing how Decorators work.
I have some basic examples there as well as some more advanced ones. Take a look at it to better understand how to create and use a Decorator.

A series of sample Decorators for Azure Pipelines (Build and Release), plus some more Advanced ones

A series of sample Decorators for Azure Pipelines (Build and Release).

I explain more about Pipelines Decorator in my blog post here

If you want to have a step-by-step guide on how Decorators work and how to structure them, check out my video: 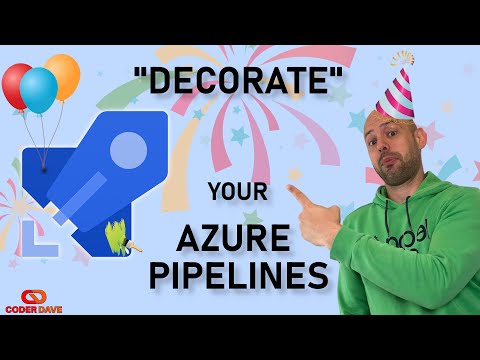 In the video I actually reference this repo and its content.

About this repo structure

There are 2 types of Basic Decorators in this repo:

As I mentioned before we have the Build Decorators and the Release Decorators, and for each we can have Pre, Post, and Pre and Post decorators.

As you can imagine, the Pre ones injects at the beginning of the Pipeline while the Post ones at the end.

Each decorator has a YAML file where we define the tasks to be injected, and a JSON file here that contains the manifest of the Decorator.

We also have the package.json and the package-lock.json for each of them because as I've mentioned we need to package the Decorator into an Azure DevOps extension, and that relies on some Node.js components.

Take a look at the video at the top of this post (here for simpler reference) to see those examples more in depth.