This article was originally published on freeCodeCamp.

By architecting in this way, you can achieve some characteristics of a well-designed application, such as separation of concerns or loose coupling.

But it does not come without drawbacks. It usually comes at the expense of some other important characteristics such as simplicity, cohesion, or agility.

It seems we can't have it all. We have to compromise.

The problem is that each layer is usually built as a completely different world on its own.

Even if the layers are implemented with the same language, they cannot communicate easily and share much with each other.

We need a lot of glue code to connect them all, and the domain model gets duplicated across the stack. As a result, the development agility suffers dramatically.

For example, adding a simple field to a model often requires modifying all the layers of the stack. Don't you think this is a bit ridiculous?

I've been thinking a lot about this problem recently, and I believe I've found a way out.

In object-oriented programming, when we use inheritance, we get some classes that can be seen in two ways: physical and logical. What do I mean by that?

For example, when we call a method in a class, we don't have to worry if the method is implemented in this class or a parent class. From the caller perspective, there is only one class to worry about. Parent and child are unified into a single logical class.

How about applying the same approach to the layers of an application? Wouldn't it be great if, for example, the frontend could somehow inherit from the backend?

Doing so, frontend and backend would be unified into a single logical layer, and that would remove all communication and sharing issues. Indeed, backend classes, attributes, and methods would be directly accessible from the frontend.

Of course, we don't usually want to expose the whole backend to the frontend. But the same goes for class inheritance, and there is an elegant solution that is called "private properties". Similarly, the backend could selectively expose some attributes and methods.

Being able to grasp all the layers of an application from one single unified world is not a small deal. It changes the game completely. It is like going from a 3D world to a 2D world. Everything gets a lot easier.

Inheritance is not evil. Yes, it can be misused, and in some languages, it can be pretty rigid. But when properly used, it is an invaluable mechanism in our toolbox.

We have a problem, though. As far as I know, there is no language allowing us to inherit classes across multiple execution environments. But we are programmers, aren't we? We can build everything we want, and we can extend the language to provide new capabilities.

But before we get to that, let's break down the stack to see how each layer can fit in a unified architecture.

For a majority of applications, the database can be abstracted using some sort of ORM. So, from the developer perspective, there is no data access layer to worry about.

For more ambitious applications, we might have to optimize database schemas and requests. But we don't want to clutter the backend model with these concerns, and this is where an additional layer may be appropriate.

We build a data access layer to implement the optimization concerns, and this usually happens late in the development cycle, if it ever happens.

Anyway, if we need such a layer, we can build it later. With cross-layer inheritance, we can add a data access layer on top of the backend model layer with almost no changes to the existing code.

For most backends, it is fine to implement them all in a single layer. But, if we want to handle some concerns separately, for example, we want to separate the authorization from the business logic, we can implement them in two layers that inherit from each other.

To connect the frontend and the backend, we usually build a web API (REST, GraphQL, etc.), and that complicates everything.

The web API must be implemented on both sides: an API client in the frontend and an API server in the backend. That's two extra layers to worry about, and it usually leads to duplicate the whole domain model.

A web API is nothing more than glue code, and it is a pain in the ass to build. So, if we can avoid it, that's a massive improvement.

Fortunately, we can take advantage of cross-layer inheritance again. In a unified architecture, there is no web API to build. All we have to do is to inherit the frontend model from the backend model, and we are done.

However, there are still some good use cases for building a web API. That's when we need to expose a backend to some third-party developers, or when we need to integrate with some legacy systems.

But let's be honest, most applications don't have such a requirement. And when they do, it is easy to handle it afterward. We can simply implement the web API into a new layer that inherits from the backend model layer.

Further information on this topic can be found in this article.

We usually implement the frontend model and the UI in two separate layers. But as I showed in this article, it is not mandatory.

When the frontend model is made of classes, it is possible to encapsulate the views as simple methods. Don't worry if you don't see what I mean right now, it will become clearer in the example later on.

Since the frontend model is basically empty (see above), it is fine to implement the UI directly into it, so there is no user interface layer per se.

Implementing the UI in a separate layer is still needed when we want to support multiple platforms (e.g., a web app and a mobile app). But, since it is just a matter of inheriting a layer, that can come later in the development roadmap.

The unified architecture allowed us to unify six physical layers into one single logical layer:

The result can be illustrated as follows: 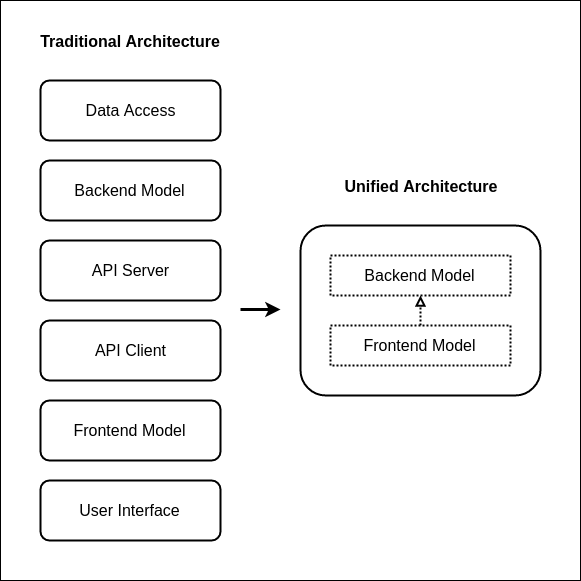 To implement a unified architecture, all we need is cross-layer inheritance, and I started building Liaison to achieve exactly that.

You can see Liaison as a framework if you wish, but I prefer to describe it as a language extension because all its features lie at the lowest possible level — the programming language level.

So, Liaison does not lock you into a predefined framework, and a whole universe can be created on top of it. You can read more on this topic in this article.

Behind the scene, Liaison relies on an RPC mechanism. So, superficially, it can be seen as something like CORBA, Java RMI, or .NET CWF.

But Liaison is radically different:

Liaison starts its journey in JavaScript, but the problem it tackles is universal, and it could be ported to any object-oriented language without too much trouble.

Let's illustrate how Liaison works by implementing the classic "Counter" example as a single-page application.

Then, let's build the frontend:

What's going on? By invoking counter.increment(), we got the counter's value incremented. Notice that the increment() method is not implemented in the frontend class. It only exists in the backend.

Note that in this simple example, the backend is not exactly remote. Both the frontend and the backend run in the same JavaScript runtime. To make the backend truly remote, we can easily expose it through HTTP. See an example here.

From the frontend point of view, the operation is transparent. It doesn't need to know that a method is invoked remotely. It just works.

How about passing/returning values to/from a remotely invoked method? It is possible to pass/return anything that is serializable, including class instances. As long as a class is registered with the same name in both the frontend and the backend, its instances can be automatically transported.

How about overriding a method across the frontend and the backend? It is no different than with regular JavaScript — we can use super. For example, we can override the increment() method to run additional code in the context of the frontend:

Then, to display the counter, all we need is:

Voilà! We built a single-page application with two unified layers and an encapsulated UI.

To experiment with the unified architecture, I built a RealWorld example app with Liaison.

I might be biased, but the outcome looks pretty amazing to me: simple implementation, high code cohesion, 100% DRY, and no glue code.

In terms of the amount of code, my implementation is significantly lighter than any other one I have examined. Check out the results here.

Certainly, the RealWorld example is a small application, but since it covers the most important concepts that are common to all applications, I'm confident that a unified architecture can scale up to more ambitious applications.

It seems we get it all, finally.

If you are an experienced developer, I guess you feel a bit skeptical at this point, and this is totally fine. It is hard to leave behind years of established practices.

If object-oriented programming is not your cup of tea, you will not want to use Liaison, and this is totally fine as well.

But if you are into OOP, please keep a little window open in your mind, and the next time you have to build a full-stack application, try to see how it would fit in a unified architecture.

Liaison is still at an early stage, but I am actively working on it, and I expect to release the first beta version in early 2020.

If you are interested, please star the repository and stay updated by following the blog or subscribing to the newsletter.

Once suspended, mvila will not be able to comment or publish posts until their suspension is removed.

Once unsuspended, mvila will be able to comment and publish posts again.

Once unpublished, all posts by mvila will become hidden and only accessible to themselves.

If mvila is not suspended, they can still re-publish their posts from their dashboard.

Once unpublished, this post will become invisible to the public and only accessible to Manuel Vila.

Thanks for keeping DEV Community 👩‍💻👨‍💻 safe. Here is what you can do to flag mvila:

Unflagging mvila will restore default visibility to their posts.