Source Code available at the bottom of the article.

EDIT 8/25/20 --> After many suggestions, updated the camera movement! Thanks everyone!

A 3D World with Three.js

Your portfolio website is likely the first place anyone is going to go after your resume, so it's important to make a good first impression! I spent part of my quarantine creating a new 3D interactive portfolio website using the Three.js and Ammo.js libraries.

With the entire country moving to remote work, the tech field is more than ever open to self taught developers. The hard part is standing out. How do you convey your passion and ability to potential employers?

While exploring Google Experiments, I discovered the amazing world of the 3D web. Many experiments were built using three.js, a library aimed at making it simple to create 3D graphics on a webpage. The library was created in 2010 by Ricardo Cabello (Mr.doob), and is currently the 38th most starred repository on Github with over 1,300 contributors. After being awestruck by the showcased projects, I knew what I wanted to learn next!

How does Three.js work? 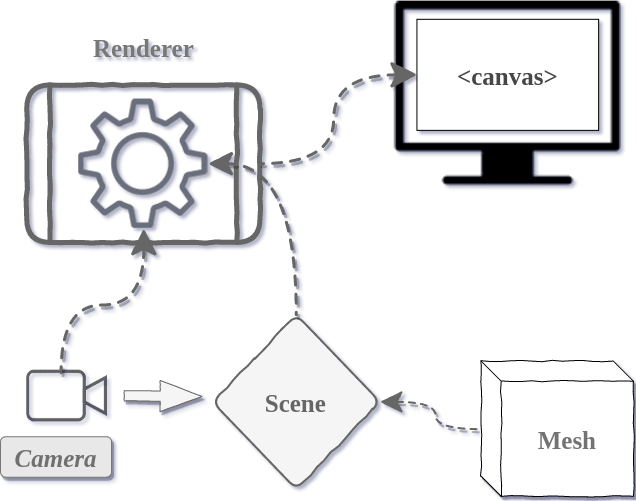 Components of a Real-Time 3D app, taken from discoverthreejs.com

Three.js is used to easily display 3D graphics in the browser. It leverages WebGL under the hood, which is an API that connects your browser to your graphics card to draw on a web page canvas. WebGL on its own only draws points, lines, and triangles, so Three.js abstracts the WebGL details away to make it super easy to create objects, textures, 3D math, and more. With Three.js, you add all these objects to a "scene" that is then passed to a "renderer", which "draws" the scene on the HTML <canvas> element to be displayed on the webpage. 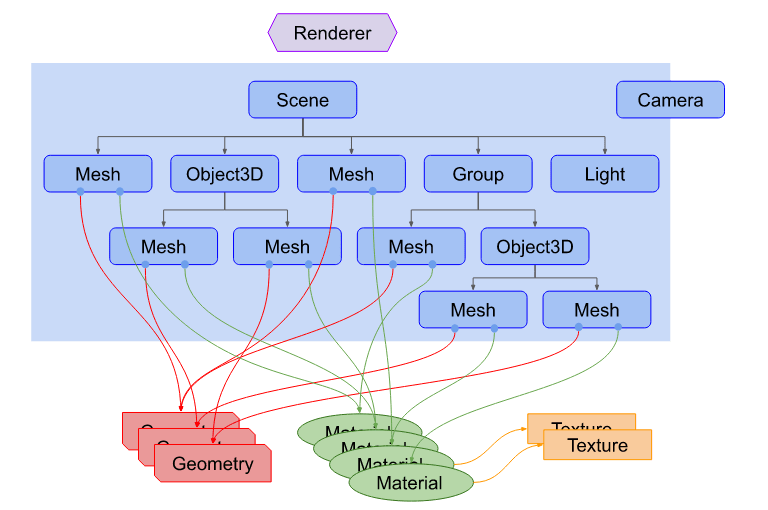 Structure of a Three.js app, taken from threejsfundamentals.org

At the core of a Three.js app is the scene object. Above is an example of a "scene graph". In a 3D engine, a scene graph is a data structure with a hierarchy of nodes, where each node represents a local space. This is how logic is arranged and the scene is spatially represented. This is similar to a DOM tree-type structure, but Three's scene functions like a virtual DOM (similar to React), and it only updates and renders what changes in the scene. The Three.js WebGLRenderer class is the magic behind the rendering, and takes your code and converts it to numbers in GPU memory for the browser to use.

Objects in the scene are called "Mesh", and mesh are composed of geometry, which describes how to draw the Mesh object, and material, which is what the mesh will "look like". These Mesh are then added to the scene. The last main element is the camera, which is where and how your scene is viewed on the canvas once rendered.

To compute animations, the renderer draws to the canvas every time the scene is refreshed (typically 60 times per second). Anything that changes in the scene needs to be updated during the render loop, using the browser requestAnimationFrame() method. The MDN docs explain how the browser updates this.

To get started, below is a simple example scene taken from the official three.js docs which creates a spinning 3D cube. The output can be seen here.

Ammo.js is a physics engine that's a direct port of the Bullet physics engine to JavaScript, ported by Alon Zakai. I have a very minimal understanding of how a physics engine works under the hood, but basically a physics engine creates a continuous loop that simulates the laws of physics based on the parameters it is created with (like gravity), which are then used to compute motion and collision.

Objects, called "Rigid Bodies" are then added this loop, and these objects can have force, mass, inertia, friction, and more applied to them. The loop keeps track of collisions and interactions by constantly checking all object's positions, states, and movements. If interactions occur, object positions are updated based on the time elapsed and that object's physics. Below is a snippet from my code showing how the physics engine loop is created and how physics are added to a Three.js Mesh sphere object.

In the Ammo.js simulated world, interactions are computed based on properties and forces. Objects have a boundary around them (sometimes called a bounding box, or hitbox) that the physics engine uses as an object's position. Upon checking all object's bounding boxes every animation loop, if any two object's bounding boxes are in the same position, the engine registers a "collision", and updates the objects accordingly. For solid objects, this means preventing these two objects from being in the same position, simulating solid matter. Below is a snippet from my code showing how the render loop and world physics are updated.

I wanted users to be able to move a ball around in the 3D World on both desktops and touchscreen mobile devices. For keyboard events, I used the "keydown" and "keyup" event listeners when the arrows keys are pressed to apply the corresponding directional forces to the ball. For touchscreens, I created a joystick controller overlay on the screen. I then added the "touchstart", "touchmove", and "touchend" event listeners to the div controller element. The controller overlay keeps track of the starting, current, and end coordinates of where the user moves their finger, and then updates the ball forces accordingly every render.

The following is just a snippet of the full joystick overlay to show the general concepts. See source code at the bottom of article for the full code.

Below is a snippet showing the joystick in action

You now have all the building blocks to create your own 3D world with a real-time physics engine and user control system! All you need is your resourcefulness and a drive to learn and create something awesome. The internet has all the resources you'll need! Anyone is capable of learning anything!

Source code for this project is available on my Github! If you have any feedback or questions, feel free to send me a message or connect with me on my LinkedIn at Ryan Floyd! I'm currently looking to break into the industry as a Junior Software engineer!