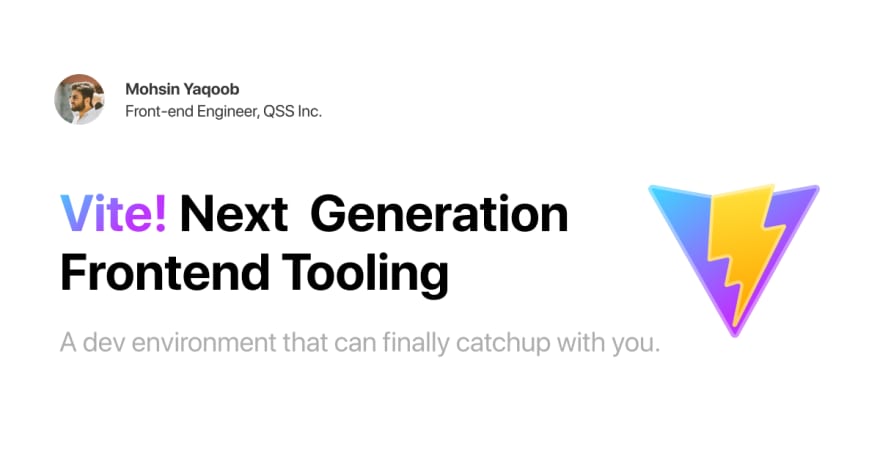 Vite is a JavaScript build tool that simplifies the way we build and develop front-end web applications. At its core, it does two things:

There are many other tools out there that do the same thing. For example, we have WebPack, but what makes Vite different?

Well Vite was created by Evan Yu who also created Vue.js as a way to both simplify and speed up the build process.

Not long ago web developers had no native way to combine JavaScript files in a modular way this led to tools like WebPack and Rollup that concatenate multiple files together into a single bundle for the browser.

The problem is that this process becomes increasingly slow as the app adds more code and dependencies.

In 2015, ECMAScript modules were introduced and by 2020 it had wide browser support allowing developers to import and export code from different files in the browser. Vite leverages native ES modules in the browser to load your code instantly no matter how large the app is it also supports hot module replacement for an extremely fast feedback loop during development.

When building for production, it uses to Rollup under the hood so you don't have to worry about configuring.
It's an opinionated tool that provides conventions that work out of the box for the majority of developers.

Before you get started with Vite, make sure to have the following:

Getting started with Vite for React.JS

To get started with Vite, run: yarn create vite from the command line and then follow the prompts. You can choose a starter project with your favorite front-end framework.

For React.JS you can type yarn create vite your-app-name --template react and you Vite will automatically generate the React boilerplate for your project.

You'll also notice the project comes with a vite.config.ts file. It has a plug-in ecosystem that can extend it with additional features and you can also manually override the Rollup defaults when necessary.

Now to serve the application locally run npm run dev.
Even if you install a bunch of big dependencies like lodash and moment, the time to run the dev server does not change.
If you open the network tab in the browser dev tools you'll notice that instead of importing a single JavaScript bundle file it's importing our actual source code like a raw .tsx file.
In this case, it also makes typescript about 20 to 30 times faster because it skips type checking and uses ES build to transpile your code.

Now as you're developing your app, you might change the state of it in the UI and then realize that some of the code needs to change when you modify the source code the changes will be reflected instantly without losing the state of the application. That's what we call hot module replacement.

Now run npm build to build the app for production.
This will generate a JavaScript bundle with Rollup and do a bunch of automatic optimizations like automatic code-splitting for any dynamic imports and CSS.

We've looked at what Vite is, how it works, and some of its features. We also learned how to set up Vite for React apps.
In order to improve your development workflow and be more productive by creating lighter and faster applications you can learn more about Vite in its docs.

Flaky Tests, and How to Deal with Them

Mohsin Yaqoob
A full-stack engineer by profession, a designer by passion, content creator and a fitness enthusiast from Kashmir.
What was your win this week?
#discuss #weeklyretro
Always over estimate effort
#discuss #devrel #productivity
Building a website gallery with ChatGPT, Stable Diffusion, React and NodeJS 🤯
#webdev #javascript #programming #react

Once suspended, mohsinyaqoob will not be able to comment or publish posts until their suspension is removed.

Once unsuspended, mohsinyaqoob will be able to comment and publish posts again.

Once unpublished, all posts by mohsinyaqoob will become hidden and only accessible to themselves.

If mohsinyaqoob is not suspended, they can still re-publish their posts from their dashboard.

Once unpublished, this post will become invisible to the public and only accessible to Mohsin Yaqoob.

Thanks for keeping DEV Community 👩‍💻👨‍💻 safe. Here is what you can do to flag mohsinyaqoob:

Unflagging mohsinyaqoob will restore default visibility to their posts.