When we create software, we rarely do it without errors. API creation isn't exempt from this fact, so sooner or later we are in the position to debug it. In JavaScript, the first stop for a debugging task is often logging to the console, but using a debugger can give us a more integrated experience.

In this tutorial, we will learn how to debug an Express-based API with the help of Visual Studio Code.

Express is a "minimalist web framework for Node.js". It allows us to link functions directly to API endpoints, which is a quick and simple way to build an API.

Visual Studio Code is a "streamlined code editor with support for development operations like debugging, task running and version control."

We will also use cURL to send requests to our API.

We will create a simple API with the Express framework and then try to debug it with the help of VSCodes debugging features instead of the console.

First, we create a new Node.js project and install our dependencies.

Next, we create an index.js file that will act as our main server script.

We use the users array as our in-memory data-store. It gets initialized with an admin user.

Next, we create our Express server and use the JSON middleware of the bodyParser package; it allows us to access the values of a JSON string stored in the body of a POST HTTP request.

Then, we create three API-endpoints. Two GET endpoints so we can request a list of all users and one specific user by its ID and one POST endpoint to create a new user.

Let's start the API with the following command!

Now that our API is up and running we can try to query it with cURL. For this, we need to open a new terminal window and execute the following commands.

Oh no! We have a typo in the JSON, users instead of user. Since we didn't handle this in our POST /users endpoint, Express just responded with an HTML formatted error.

This is a simple example of a problem that could be fixed without much hassle, but let's use it to start VSCodes debugger so we can investigate what went wrong directly at runtime.

We check which endpoint we want to debug and set a breakpoint inside the function that endpoint triggers. This is done with a left-click left to the line number. Let's to it on line 15, which should be the first line of our POST /users endpoint function.

Then we start the debugger by clicking on Debug->Start Debugging at the top menu or by pressing F5.

VSCode will start our application and the debugger for us. It will also link the two together via Node.js' debugging protocol.

Then we re-send the request that led to an error with cURL and try to find out what happens.

This request will run the function linked to POST /users and halt at the break-point in its first line.

If we look at the side-bar on the left of our code, we can see a VARIABLES category with various sub-categories like Block and Local. Let's open Local and see what's inside. 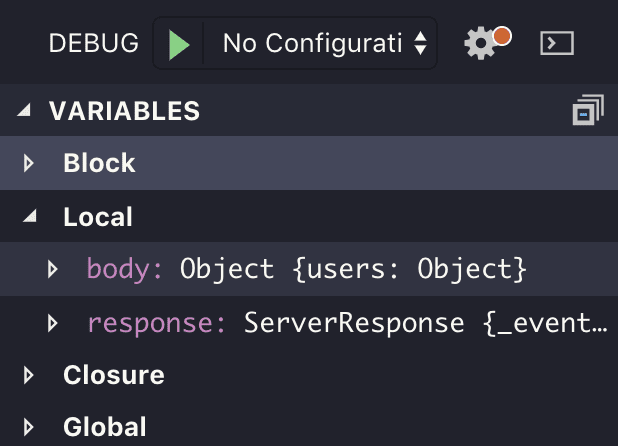 Let's step to the next line with F10 to see what happens.

All seems to work as expected.

Let's step to the next line again.

Somehow we ended up in a whole different place of the code-base?

It seems like we created an error by setting the id of our user object, how did this happen?

Let's open our index.js again, move the break-point to line 16 and let the debugger run to the end of the event loop by pressing F5.

Then re-send the request with cURL to see what happened before we tried to set user.id. 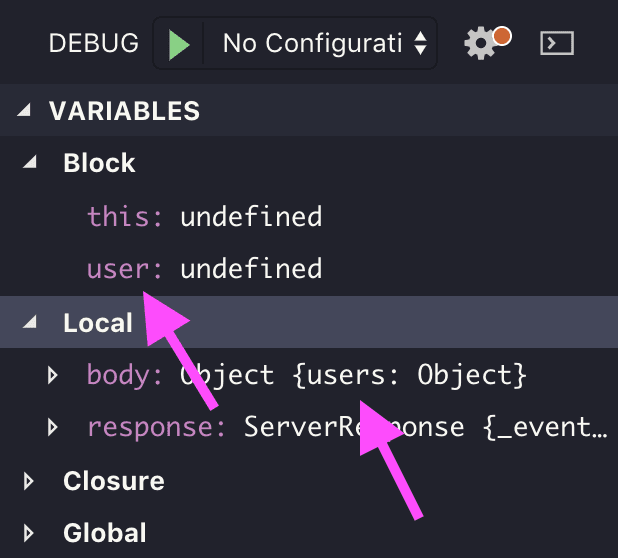 Our body has a users attribute, but we try to destructure a user variable from it in line 15, which leads to an error when we try to write to user.id in line 16.

Now that we now our problem, let's stop the debugger and fix it.

Let's restart our server, so it runs the new code:

And resend our problematic request:

Finally, we get a useful JSON formatted error message.

Debugging Node.js based APIs with the help of VSCodes integrated debugger is a straight-forward task. We just need to set a break-point, no additional code involved.

It gives us many runtime insights out-of-the-box, including:

Taking care of developer relations at Moesif and creating educational content at fllstck.dev

Moesif is the most advanced API analytics platform for platform teams. Thousands of companies use Moesif API analytics for REST and GraphQL APIs to make smarter decisions and build for growth.
code of conduct - report abuse

5 Steps to debugging Next.js/Node.js from VSCode or Chrome DevTools

Thousands of organizations use Moesif to better understand their APIs (REST and GraphQL) and make smarter decisions.