What is the Memento design pattern?

Memento, also known as Token, belongs to the category of behavioural design patterns. The intention of this design pattern is described in the GoF book:

Without violating encapsulation, capture and externalize an object’s internal state so that the object can be restored to this state later.

To understand the Memento design pattern better, let’s dive in by analysing its structure and implementation in more detail!

The general structure of the Memento design pattern looks like this: 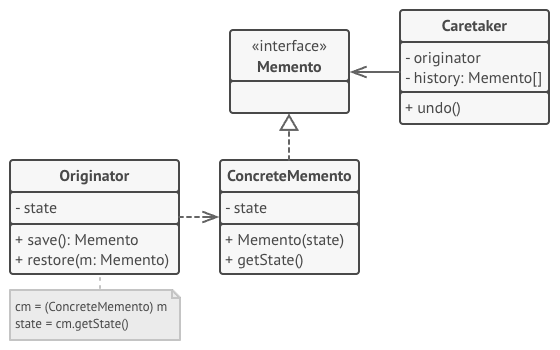 Also, the pattern could be used for safety reasons — when direct access to the object’s fields/getters/setters violates its encapsulation. The Memento makes the object itself responsible for creating a snapshot of its state. No other object can read the snapshot, making the original object’s state data safe and secure.

To implement the Memento design pattern and show its advantages, we will work further on the Command design pattern’s example. So if you have missed the previous article, I strongly recommend checking the implementation part of it now.

The main idea of the example remains the same — we will create a very simple, fake graphics editor. To simplify the Command design pattern’s part, only one command is created and available in the example’s UI — RandomisePropertiesCommand. This command randomises all the properties of the Shape object — height, width and colour — which acts as a state of our example.

Obviously, what is different from the previous implementation — the Memento design pattern is added. When implementing the Command design pattern’s example, we stored its state (Shape object) in the example component itself. This time, the state is stored inside the Originator object and could be manipulated only by it. The RandomisePropertiesCommand acts as a caretaker object and stores the previous snapshot of the originator’s state in the backup property. The backup property is nothing else than the Memento object which is created by the originator before executing the command.

Before implementing the Memento design pattern and integrating it inside our example, let’s check the class diagram first and investigate its components.

The class diagram below shows the implementation of the Memento design pattern: 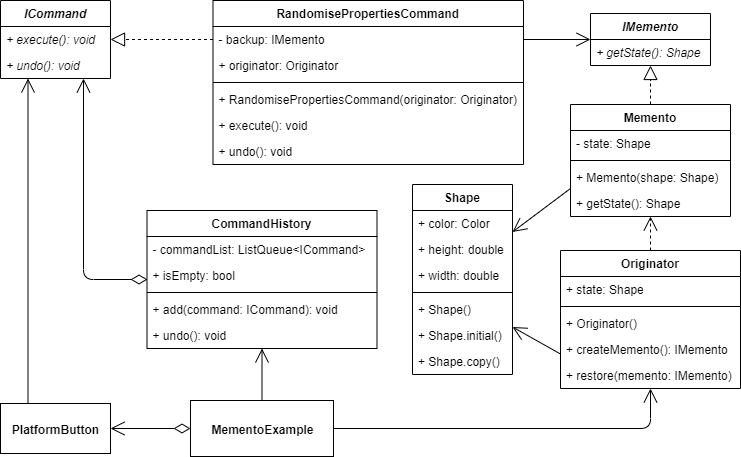 ICommand is an abstract class that is used as an interface for the specific command:

RandomisePropertiesCommand is a concrete command which implements the abstract class ICommand and its methods.

CommandHistory is a simple class that stores a list of already executed commands (commandList) and provides methods to add a new command to the command history list (add()) and undo the last command from that list (undo()).

IMemento is an abstract class that is used as an interface for the specific memento class:

Memento is a class that acts as a snapshot of the originator’s internal state which is stored in the state property and returned via the getState() method.

Shape is a simple data class that is used as an internal originator’s state. It stores multiple properties defining the shape presented in UI: color, height and width.

MementoExample initializes and contains CommandHistory, Originator objects. Also, this component contains a PlatformButton widget that has the command of RandomisePropertiesCommand assigned to it. When the button is pressed, the command is executed and added to the command history list stored in CommandHistory object.

A simple class to store information about the shape: its color, height and width. Also, this class contains several constructors: 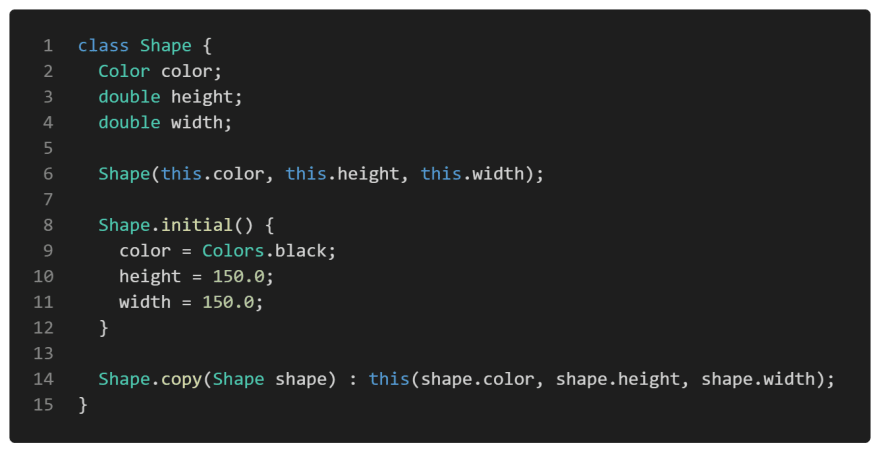 An interface that defines methods to be implemented by the specific command classes. Dart language does not support the interface as a class type, so we define an interface by creating an abstract class and providing a method header (name, return type, parameters) without the default implementation.

A specific implementation of the command that sets all the properties of the Shape object stored in the Originator to random values. Also, the class implements the undo operation. 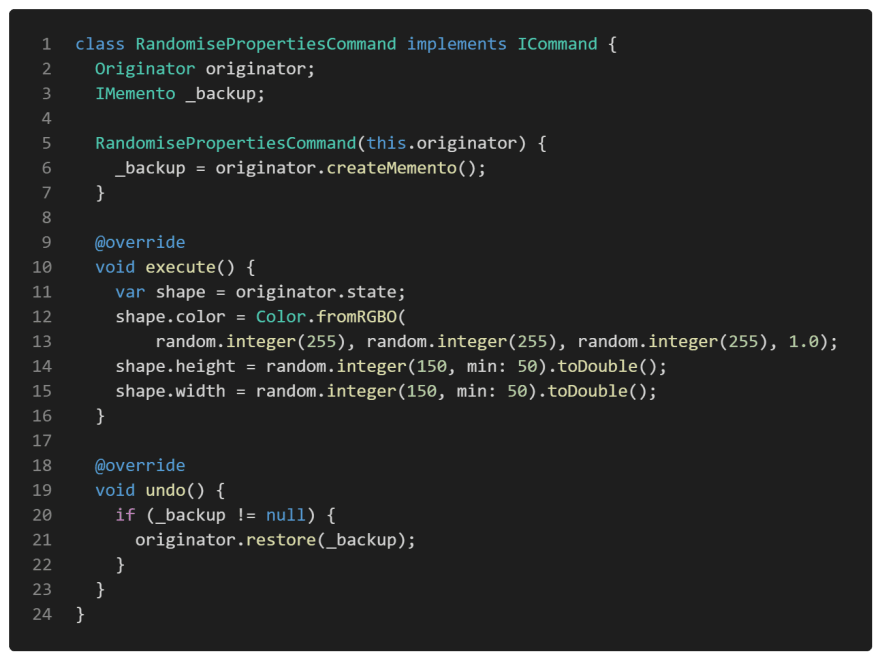 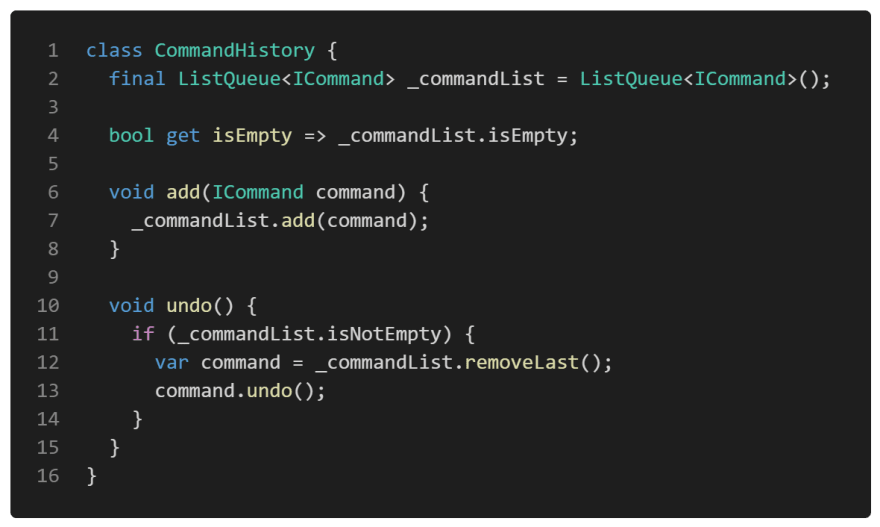 An interface that defines the getState() method to be implemented by the specific Memento class.

An implementation of the IMemento interface which stores the snapshot of Originator’s internal state (Shape object). The state is accessible to the Originator via the getState() method. 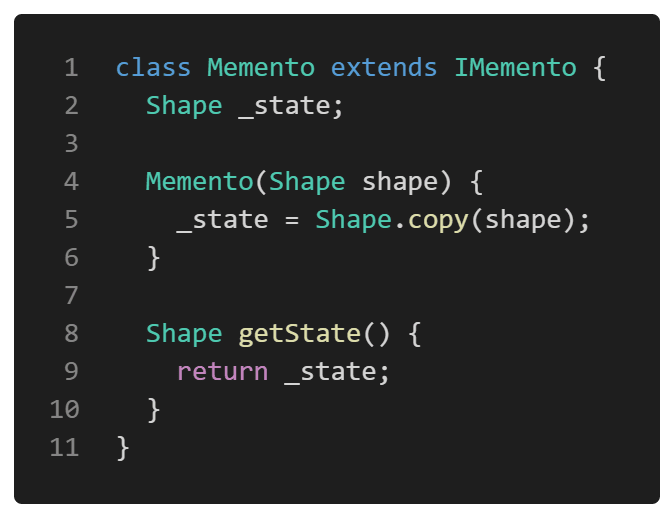 A class that defines a createMemento() method to save the current internal state to a Memento object. 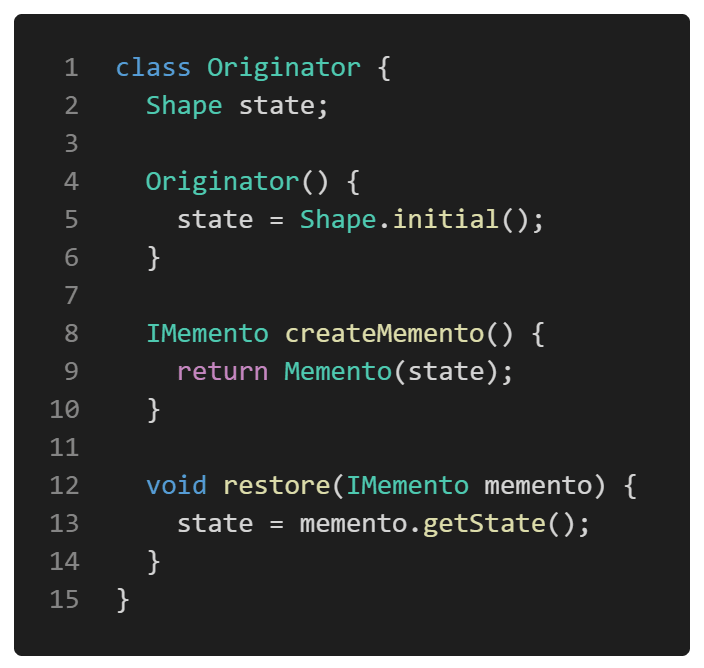 First of all, a markdown file is prepared and provided as a pattern’s description: 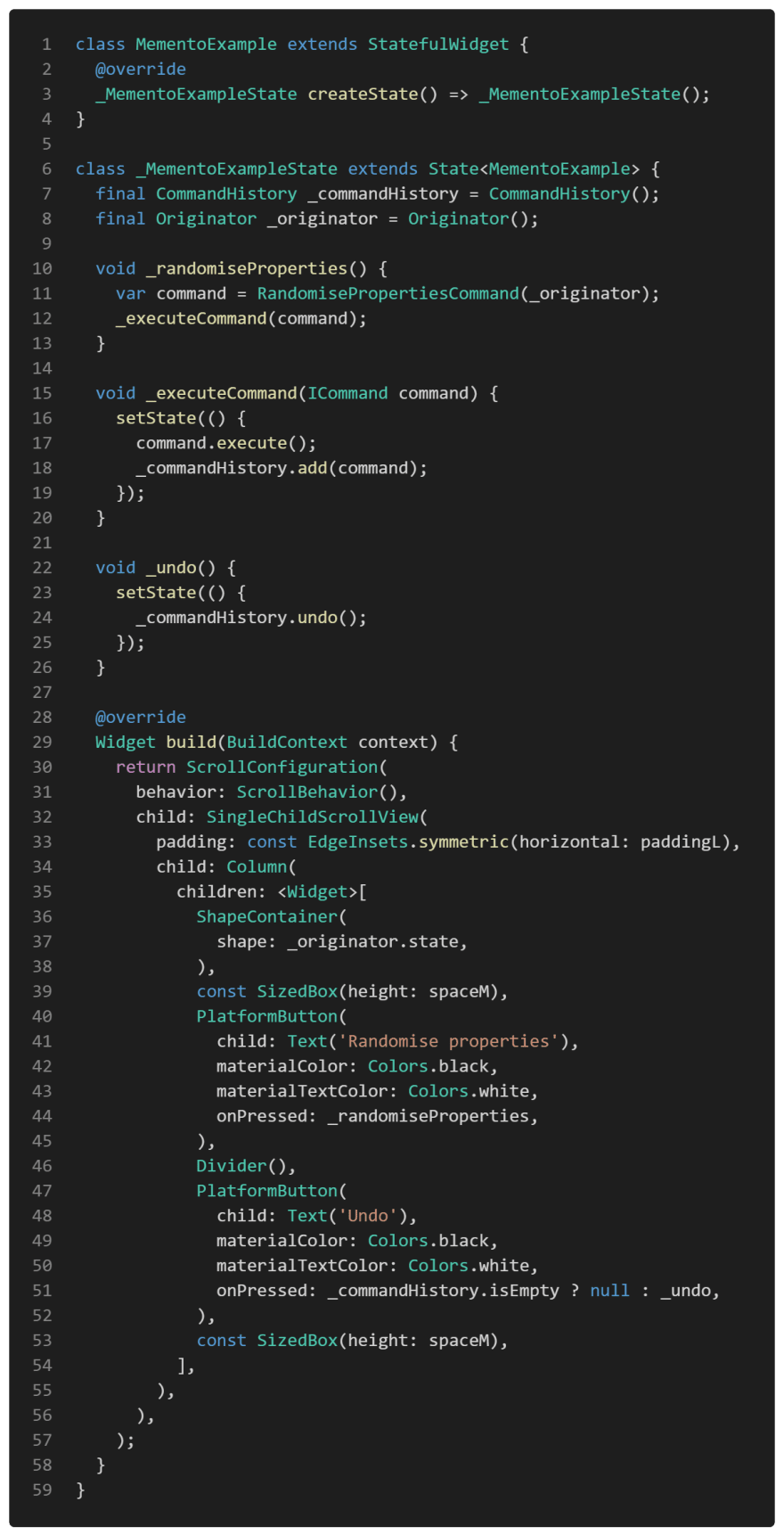 As you can see in this example, the client code (UI elements, command history, etc.) isn’t coupled to any specific command class because it works with it via the ICommand interface.

In addition to what the Command design pattern provides to this example, the Memento design pattern adds an additional layer to the example’s state. It is stored inside the Originator object, the command itself does not mutate the state directly but through the Originator. Also, the backup (state’s snapshot) stored inside the Command is a Memento object and not the state (Shape object) itself — in case of the state’s restore (undo is triggered on the command), the specific command calls the restore method on the Originator which restores its internal state to the value stored in the snapshot. Hence, it allows restoring multiple property values (a whole complex state object) in a single request, while the state itself is completely separated from the command’s code or UI logic.

As you can see in the example, when the command is executed, under the hood the snapshot of the originator’s internal state is stored which could be restored later by executing the undo operation on the command.

All of the code changes for the Memento design pattern and its example implementation could be found here.

💖 or 🦄 this article to show your support and motivate me to write better!
💬 Leave a response to this article by providing your insights, comments or wishes for the next topic.
📢 Share this article with your friends, colleagues on social media.
➕ Follow me on dev.to or any other social media platform.
⭐ Star the Github repository.