This may be viewed as a memory box:

Say we now store another value using the same variable

This may be viewed as an updated memory box:

Let us now store the value of this variable into another

This creates another memory box as follows: 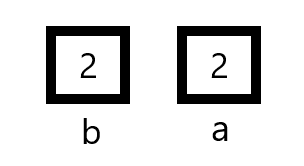 This is basically how other programming languages visualize variables. We can simply say that the "memory location" is emphasized which contains a "value". However, Python views variables as "tags" which are referenced (or tied) to some "value" (or object).

Let us visualize the above examples once again, say we have the equation

This may be viewed as the value or object having priority, to which a tag is assigned:

Say we now store another value using the same variable

In this case, the tag is simply changed to the new value, and the previous value (now unreferenced) is removed by the garbage collector:

Let us now store the value of this variable into another

In this case, another tag is created that references to the same object:

Hence, only one memory is referenced by two names.

So to conclude, other languages have variables, while Python has 'tags' to represent the values (or objects). This method allows Python to utilize memory efficiently, and this visualization helps in understanding variables in Python.

Building a Telegram Bot with Python and Fauna

An analysis of the $82 million eBay Scalping Market for Xbox, PS5, AMD, and NVIDIA

How to pass job interview - chat with tech recruiter

I made a Google classroom bot in less than 100 lines!