This is part one of a four part series on deploying serverless application on AWS with the Cloud Development Kit (CDK) and will cover App Runner with VPC integration. Each post goes into detail about one particular AWS service to run the application, as well as one sample application that uses a particular architectural pattern or framework.

The next posts of this series will be about:

Introduced in May 2021, AWS App Runner is another managed container service for the cloud. Its principal use cases are web applications and APIs. Like its cousins, DigitalOcean App Platform, Heroku, or Google Cloud Run, AWS doesn’t want you worrying about scaling or infrastructure while using their service.

Until February 2022, the service was barely usable for production scenarios, as it had no VPC support until this point. Luckily this has changed in the meantime and there is also CDK and Terraform support for it, so we can setup it using Infrastructure-as-Code. If you are not familiar with those tools already, another and definitely easier option is to use AWS Copilot.

How does App Runner compare to Lambda, ECS or EKS? The point is clearly about keeping management overhead low. While ECS and EKS are nice, they require a lot of components to setup. For EKS it's even more complex, as Kubernetes is a topic on its own and requires a lot of effort to get a stable and secure setup. Lambda might be a good solution for a lot of use-cases, but it has limitations on the maximum number of concurrent executions and there is also the cold start issue, that might not be suitable for every scenario.

Behind the scenes, App Runner runs on Amazon ECS Cluster and Fargate to execute your containers. Compared to them, App Runner is a lot easier to get into, but you lose some of the more fine-grained configuration options:

Also, cost estimation for App Runner is far simpler — AWS changes a fixed CPU and Memory fee per second. With $0.007 / GB-hour per provisioned container instance and $0.064 / vCPU-hour as well as $0.007 / GB-hour, you can get a high volume production app (80 requests/active container instance) with 1 vCPU and 2GB for a total of 102 dollar per month. For a development or test app (traffic of 2 requests per second for 2 hours each day), monthly costs can go down to 4.80 dollar.

The key features of AWS App Runner are:

Let's get our hands dirty and see how App Runner works in reality. For the sake of this demo, we are going to use the following technologies:

You can find all the code in my repository. Our architecture will look like this: 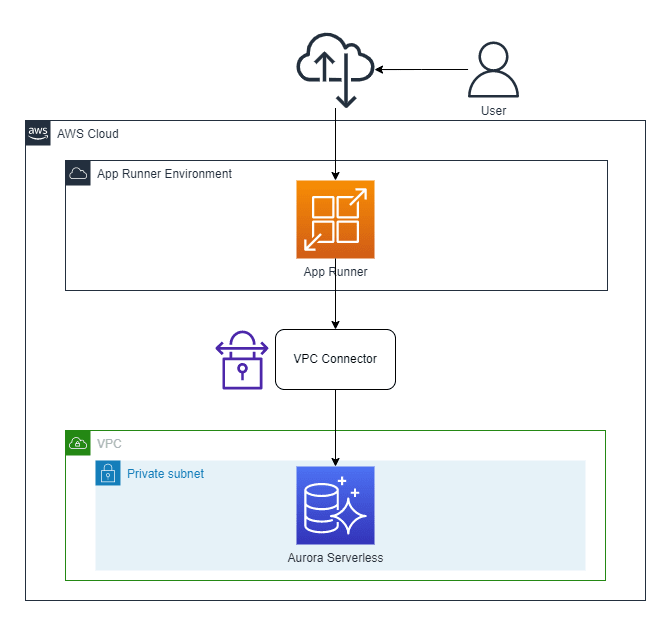 To get things started, let's review the application. The application is quite simple and is designed to show off the App Runner VPC integration feature by implementing a To-Do List API with Gin and GORM for Postgres.

You can hit the following endpoints:

The main function fetches the credentials for the Serverless Aurora PostgreSQL DB from AWS Secrets manager, then initializes the DB connection using GORM and finally launches the Gin webserver for the REST API and HTTP Health Checks:

In the V1 Group, you see the definition of the controllers for the CRUD functionality of the Todo List API. They are implemented in the src/app/controllers/tasks.go file. The connection to the database is defined in src/app/db/db.go, task object for the ToDo's is in src/app/models/task.go. There are also some common utils and types for the DB secret in src/app/types/secrets.go and src/app/utils/secrets.go.

The Dockerfile to build the application using Go 1.18 and including SSL certificates is defined like this:

The image is build automatically by the AWS CDK and has a total size of only 5.42 MB! That's one of the big advantages of Go, as the application is compiled for the target architecture and can therefore run without any dependencies. A similar Python application with FastAPI would easily go to over 100 MB or more.

As AWS App Runner is only available in a limited number of regions so far, we will go for Ireland (eu-west-1) instead of the default for Germany, which would be Frankfurt (eu-central-1).

Projen was used to create the base files for the AWS CDK 2.x IaC code. Apart from CDK, it can also generate projects for CDK8s and CDKTF, which are used to deploy Kubernetes Manifests and Terraform Code using modern programming languages supported by the jsii compiler.

We need a VPC to host the Serverless Aurora Database in a private subnet. To create our database cluster in RDS, we're going to use the ServerlessCluster construct. Once again this construct is going to create many resources on our behalf, with only a few lines of code on our end defining our requirements:

At the time of the creation of this walkthrough, the App Runner constructs avaialable are L1, which means they map directly to Cloudformation. There are a few things to discuss here, so I want to start by talking about how the App Runner service connects to the VPC. When connecting your service to an existing VPC, you need to create a VPC Connector in App Runner. The connector is what allows your App Runner service to egress the service into your VPC.

For the connection to be established, a couple of parameters are required. First, you need to define the subnet id's that you want to egress into. Next, you will attach security groups to control network access into the VPC. You can attach multiple security groups and multiple subnets to a VPC connector, depending on the use case:

The App Runner instance role: This is the role for OUR code, meaning that the AWS API calls being made from my application require the IAM policies attached to make the calls to AWS resources. In our code example, we interact with AWS Secrets Manager, which we've added into the IAM policy attached to this role:

Finally we have our App Runner service. This is where we define the configuration of our service which includes how to build our service (source code or from a container image), which VPC connector to use (if any), auto scaling, service and instance roles, and so on:

We have some environment variables set in the configuration, and you may notice that we pass the secret ARN from the secret we created for the database and stored in in Secrets Manager. As mentioned above, we need this ARN to know which secret we will reference when making the call in our code. Last but not least, the ECR image is built automatically by CDK using the Dockerfile in the src/app directory and pushed to the registry, so App Runner can fetch it:

The whole application stack including infrastructure components can be deployed with a single command: cdk deploy --require-approval never

It will take a couple of minutes for CloudFormation to finish the stack creation. Afterwards, you can go into the App Runner UI and see the running service: 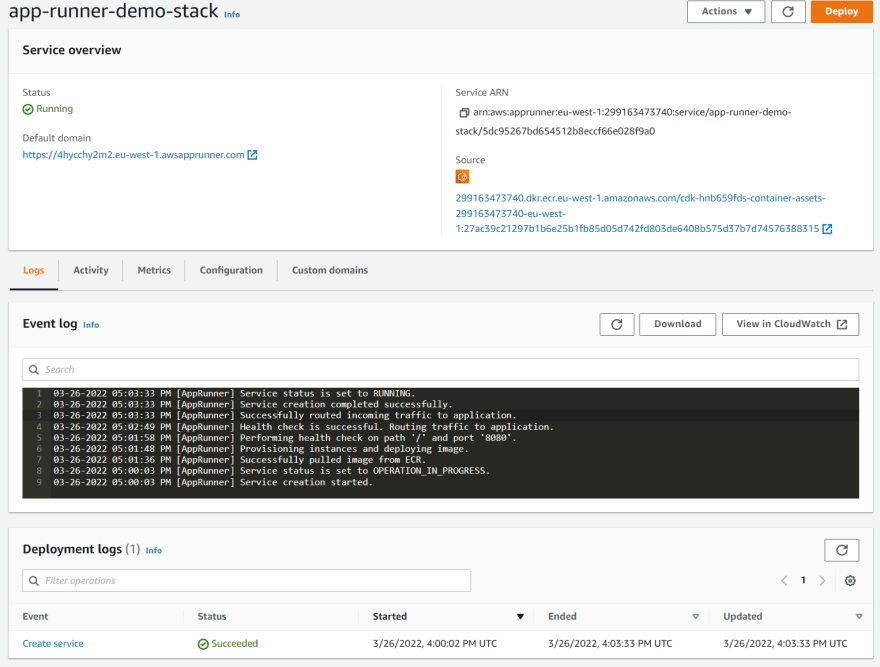 There are some more pages where you can see application logs and metrics. Also you can view and edit the configuration that has been done by AWS CDK: 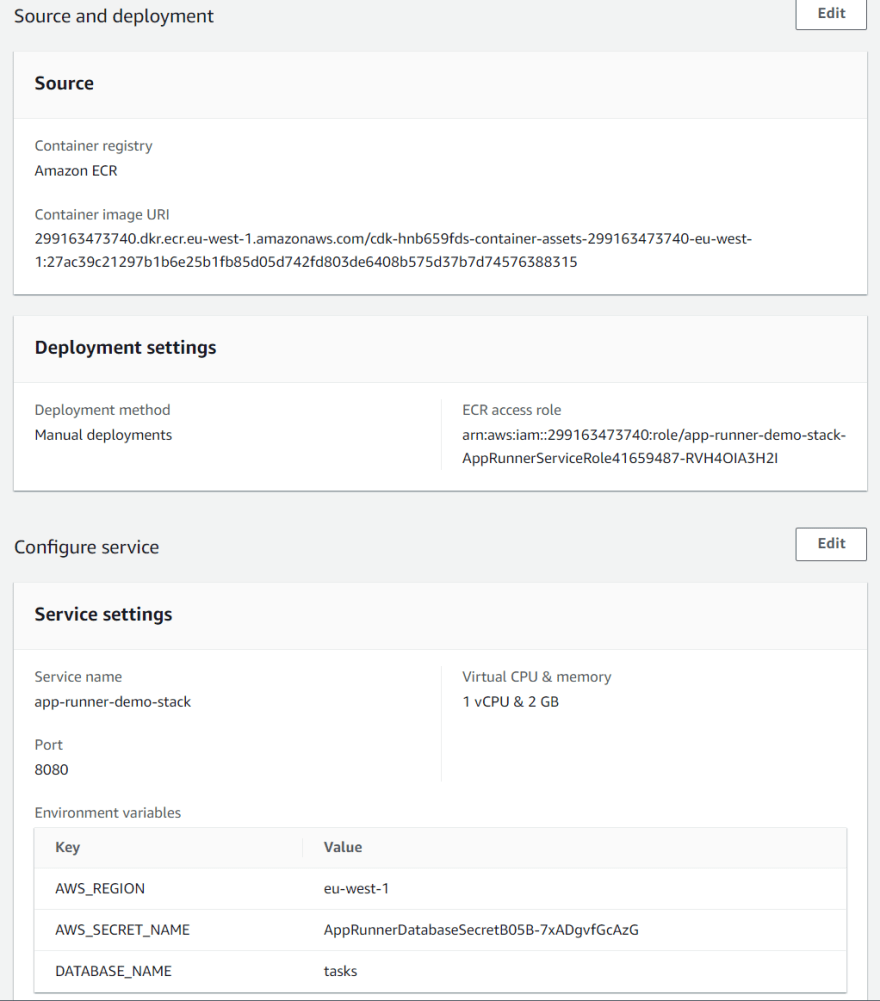 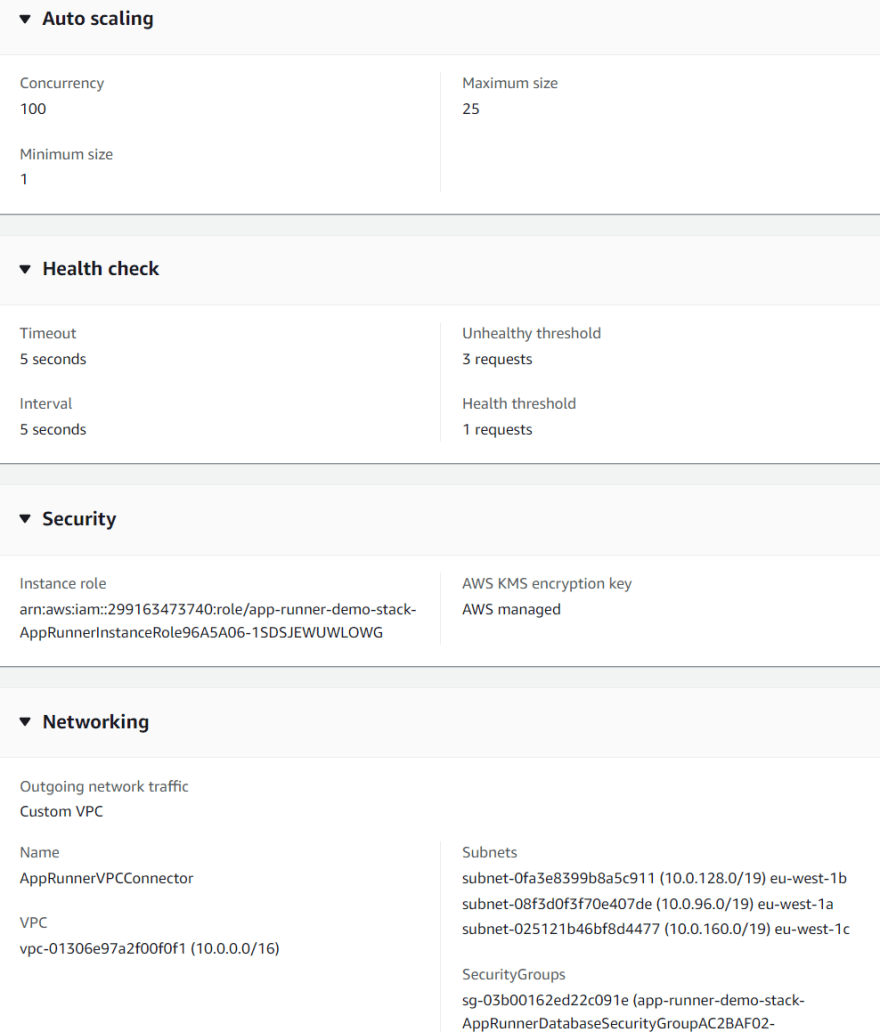 As you can see, the options provided are way less than what you can configure with comparable services like ECS or EKS. So there is a tradeoff between simplicity and available features, where you have to validate what matches your requirements.

That's it! In this walkthrough we built an App Runner service that connects into a VPC that has resources running within the private subnets. Remember that we are not limited to RDS here, I simply chose those to provide a functional working example. The use cases are endless and whether that's talking to ECS Containers that are registered in AWS CloudMap, an Elasticache cluster, a Kubernetes service, or any other resource that resides in the VPC.

In general, I like the App Runner approach and think it can greatly simplify the creation of serverless, containerized services on AWS Fargate. Running a load test with 500 servers in parallel showed the performance is pretty neat and autoscaling works as expected: 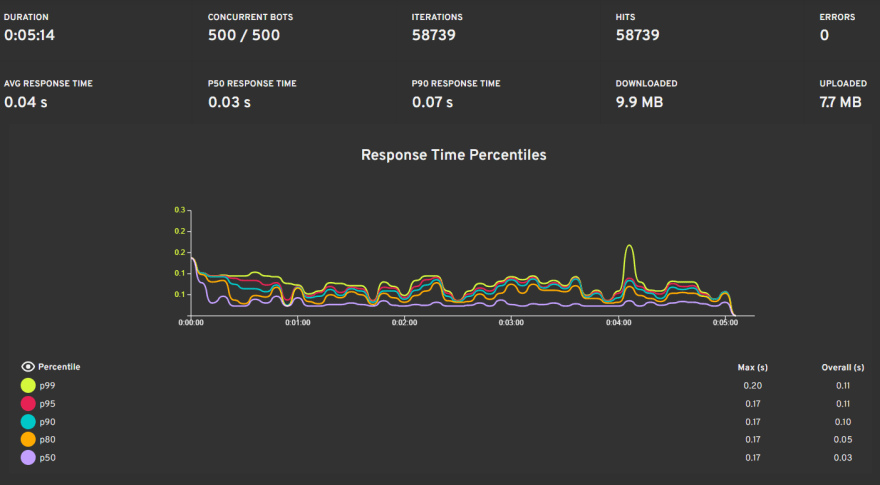 What do you think of AWS App Runner? Let me know in the comments and see you in part 2 of the series with Hexagonal Architecure on Lambda (coming soon)!

Once suspended, maxritter will not be able to comment or publish posts until their suspension is removed.

Once unsuspended, maxritter will be able to comment and publish posts again.

Once unpublished, all posts by maxritter will become hidden and only accessible to themselves.

If maxritter is not suspended, they can still re-publish their posts from their dashboard.