What are python functions?
Python Functions are a set of actions that we group together, and give a name to. The core functions in Python language includes string.title() and list.sort(). In python one can define his or her own functions, in order to "teach" Python new behavior.

Advantages of using Python functions
•We write a set of instructions once. We save some work in this simple example, and we save even more work in larger programs.
•When our function works, we don't have to worry about that code anymore. Every time you repeat code in your program. Writing a function means there is one place to fix mistakes, and when those bugs are fixed, we can be confident that this function will continue to work correctly.
•We can modify our function's behavior, and that change takes effect every time the function is called. This is much better than deciding we need some new behavior, and then having to change code in many different places in our program.

Basic python syntax
In Python a function is defined using the def keyword:

Calling a Function
To call a function, use the function name followed by parenthesis:

Arguments in Python
Information can be passed into functions as arguments.
Arguments are specified after the function name, inside the parentheses. You can add as many arguments as you want, just separate them with a comma.
The following example has a function with one argument (planguage). When the function is called, we pass along a programming language, which is used inside the function. 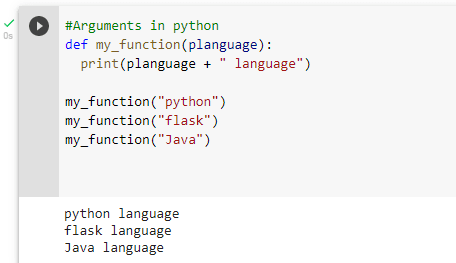 NOTE:
A parameter is the variable listed inside the parentheses in the function definition.
An argument is the value that is sent to the function when it is called.

Number of Arguments
By default, a function must be called with the correct number of arguments. Meaning that if your function expects 2 arguments, you have to call the function with 2 arguments, not more, and not less.

Arbitrary Arguments, *args
If you do not know how many arguments that will be passed into your function, add a * before the parameter name in the function definition.
This way the function will receive a tuple of arguments, and can access the items accordingly:

Keyword Arguments
You can also send arguments with the key = value syntax.
This way the order of the arguments does not matter.

Arbitrary Keyword Arguments, *kwargs
If you do not know how many keyword arguments that will be passed into your function, add two asterisk: * before the parameter name in the function definition.
This way the function will receive a dictionary of arguments, and can access the items accordingly:

Default Parameter Value
If we call the function without argument, it uses the default value: 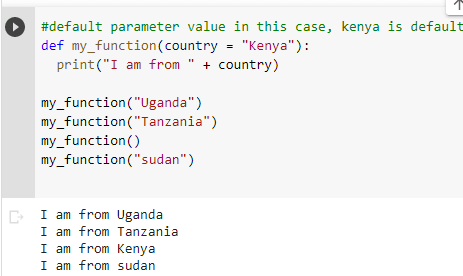 Passing a List as an Argument
You can send any data types of argument to a function (string, number, list, dictionary etc.), and it will be treated as the same data type inside the function.
E.g. if you send a List as an argument, it will still be a List when it reaches the function:

Recursion
Python also accepts function recursion, which means a defined function can call itself.
Recursion is a common mathematical and programming concept. It means that a function calls itself. This has the benefit of meaning that you can loop through data to reach a result.
The developer should be very careful with recursion as it can be quite easy to slip into writing a function which never terminates, or one that uses excess amounts of memory or processor power. However, when written correctly recursion can be a very efficient and mathematically-elegant approach to programming.
In this example, tri_recursion() is a function that we have defined to call itself ("recurse"). We use the k variable as the data, which decrements (-1) every time we recurse. The recursion ends when the condition is not greater than 0 (i.e. when it is 0). 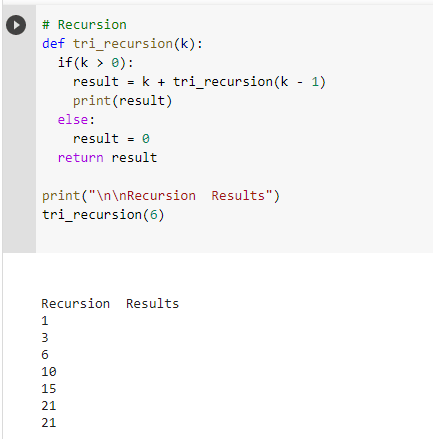 How to improve code review culture (for managers and CTOs)