There is a new major Node.js release version every 6 month (on average), so it keeps getting better and easier to use. 😎 A result of a continuous release cycle of Node.js is that existing applications are written aiming at a moving target, and applications have to be updated on a regular basis to ensure a working state in the future and no big version and feature jumps occur causing a big amount of adaption.

The Node.js community provides Long Term Support (LTS) releases to guarantee that the environment won't change for a fixed period. With LTS you get: 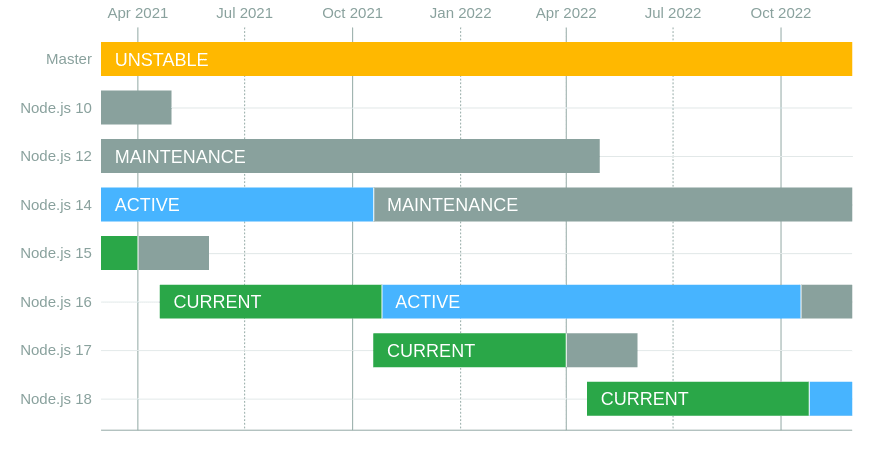 For updating Node.js there are several options available depending on the way you first installed it.

If you installed Node.js via downloading the official package, the package will already contain an installer which detects an existing version of Node.js. Hence, you just download the LTS version that fits your use case and run the installer.

The recommended way to install Node is via NVM (Node Version Manager), because you can manage multiple versions of Node.js. If you have used nvm to install Node.js, upgrading to a new version is one line. You can install a new Node.js version or basically any Node.js version using nvm install <VERSION>, like nvm install 10.16.3 or just install the latest LTS version with nvm install node. After installing the node version you want to use, you have to switch to it with nvm us <VERSION>, like nvm use 10.16.3 or nvm use --lts.

Homebrew is a very popular way to install software on Mac and upgrading Node.js is simple.

Thanks for reading and if you have any questions , use the comment function or send me a message @mariokandut.

If you want to know more about Node, have a look at these Node Tutorials.

References (and Big thanks):

Learn to secure your app while coding it ...