Python has a feature that is unique among popular programming languages- its functions are first-class objects.

A function in Python is a special kind of object.

A function is an object with a name, that is callable like a method or a method's implementation in C++, Java, or C#.

Functions are functions like you are accustomed to in other languages. In Python, a function is just a function.

You can define a function anywhere in your Python program, just like any other object type, using the def keyword followed by the function name and a list of arguments in parentheses.

You can assign them to variables, store them in data structures, and pass them as arguments to other functions, and even return them as values from other functions.

All data in a Python program is represented by objects or relations between objects.

Things like strings, lists, modules, and functions
are all objects.

Because the toy function is an object in Python, you can assign it to another variable,

This line doesn’t call the function.

It takes the function object referenced
by toy and creates a second name, play, that points to it.

You could now also execute the same underlying function object by calling play:

What happens under the hood 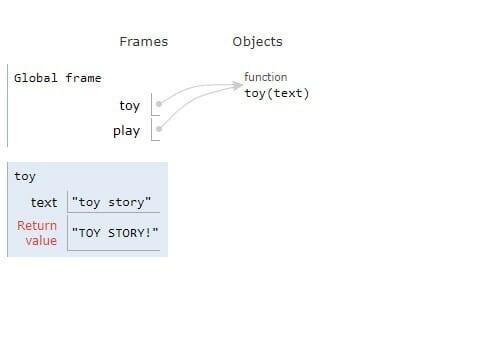 Function objects and their names are two separate concerns.
Here’s more proof: You can delete the function’s original name toy.

Since another name play still points to the underlying function you can still call the function through it:

By the way, Python attaches a string identifier to every function at creation time for debugging purposes.

You can access this internal identifier with the name attribute:

Now, while the function’s name is still toy that doesn’t affect how you can access the function object from your code.

The name identifier is merely a debugging aid.

A variable pointing to a function and the function itself are really two separate concerns.

Functions Can Be Stored in Data Structures

Since functions are first-class citizens, you can store them in data structures, just like you can with other objects.

For example, you can add functions to a list:

Accessing the function objects stored inside the list works like it would with any other type of object:

You can even call a function object stored in the list without first assigning it to a variable.

You can do the lookup and then immediately call the resulting “disembodied” function object within a single expression:

Functions Can Be Passed to Other Functions

Because functions are objects, you can pass them as arguments to
other functions.

Here’s a greet function that formats a greeting string
using the function object passed to it and then prints it:

You can influence the resulting greeting by passing in different functions. Here’s what happens if you pass the paly function to greet:

Of course, you could also define a new function to generate a different flavor of greeting.

For example, the following whisper function might work better if you don’t want your Python programs to sound like Optimus Prime:

The ability to pass function objects as arguments to other functions is powerful.

It allows you to abstract away and pass around behavior in
your programs.

In this example, the greet function stays the same but
you can influence its output by passing in different greeting behaviors.

Functions that can accept other functions as arguments are also called higher-order functions.

They are a necessity for the functional programming
style.

The classical example for higher-order functions in Python is the built-in map function.

It takes a function object and an iterable, and then
calls the function on each element in the iterable, yielding the results as it goes along.

Here’s how you might format a sequence of greetings all at once by
mapping the play function to them:

As you saw, map went through the entire list and applied the paly function to each element.

As a result, we now have a new list object with
modified greeting strings.

Once suspended, mahmoudessam will not be able to comment or publish posts until their suspension is removed.

Once unsuspended, mahmoudessam will be able to comment and publish posts again.

Once unpublished, all posts by mahmoudessam will become hidden and only accessible to themselves.

If mahmoudessam is not suspended, they can still re-publish their posts from their dashboard.

Once unpublished, this post will become invisible to the public and only accessible to Mahmoud EL-kariouny.

Thanks for keeping DEV Community 👩‍💻👨‍💻 safe. Here is what you can do to flag mahmoudessam:

Unflagging mahmoudessam will restore default visibility to their posts.