Graphical user interfaces (GUIs) provide an intuitive visual frontend for interacting with computers. GUIs use visual indicators like icons, windows, and menus for better user interaction and experience, unlike command-line interfaces (CLIs) that use text for input and output operations.

Rust has been growing in popularity over time, likely due to its flexibility and vibrant open source community. Developers have used Rust for things like systems design, web development, and building GUIs. You can use many packages and crates to develop fast, complex GUI applications in Rust.

In this article, we’ll talk about popular Rust GUI libraries and frameworks like gtk-rs, fltk-rs, iced, relm, Azul, and egui. We’ll also compare these GUI libraries and discuss how they’re a good choice for building your GUI application.

GTK is a popular cross-platform, object-oriented widget toolkit developed by The GNOME Project. It’s used for building portable GUI applications that work on Unix, Windows, and macOS systems in a number of languages, from Python to JavaScript, C, and Rust.

There are various versions of the GTK project, such as GTK 3, with changes and upgrades to each version. 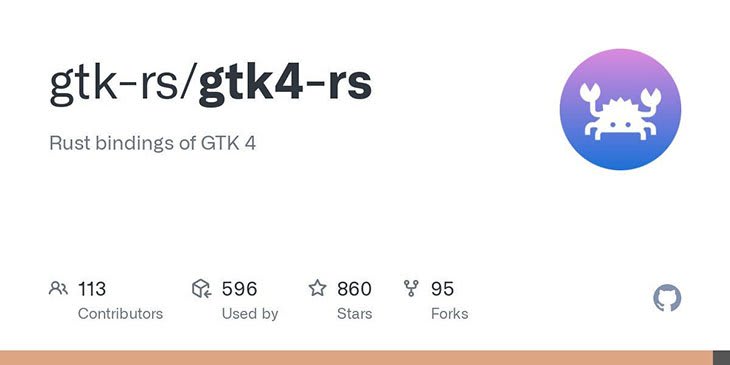 To get started using the gtk-rs libraries, you need the Rust toolchain and the GTK library. After creating a project, add the library to your dependencies in the Cargo.toml file for the GTK 4 crate:

If you’re on macOS or Linux, install the GTK 4 library using the brew package manager:

Check these pages for installation instructions on the various Linux Distros and Windows. After installing gtk4 and adding it to your dependencies, you can import the crate like this:

The gtk-rs book is a good resource for learning how to build GUIs in Rust using the library.

The GTK library is popular in the developer community. Many popular Linux GUI applications use the GTK library and GNOME stack. The gtk-rs library is just one of the many Rust GUI libraries ready for production and has been used in more than 500 projects.

FLTK (Fast Light Toolkit) is a lightweight, cross-platform supported toolkit for building GUIs. FLTK is supported on Windows, macOS, and UNIX systems and was originally built for C++. If you use the FLTK toolkit to create a GUI application, the application looks the same on all supported operating systems.

The fltk-rs library provides Rust bindings for the FLTK toolkit. The fltk-rs crate supports old architecture with more than 80 customizable widgets and more than four supported theme schemes, including the GTK scheme. You can also use the fltk-theme crate for more customizations. 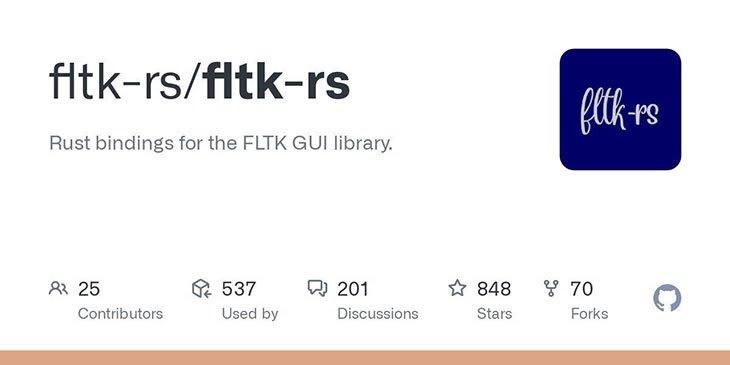 The fltk-rs library is quick to install, build, start, and run with a single execution. Getting started with the fltk-rs crate is easy – all you have to do is add the project as a dependency to your Cargo.toml file and install the library on your computer.

You can install the fltk library using this brew command if you're on a macOS or Linux computer:

You can find instructions for installing the fltk library for other operating systems on the linked page. Add the project as a dependency to your Cargo.toml file:

After adding the project and installing the fltk library, you can import the crate into your project:

Check out the fltk-rs documentation for a detailed overview of its functionalities and uses.

The fltk library is quite popular and has more than 800 stars. It’s growing fast with more than 200 releases at this time and you can use the library in production without concerns.

According to many other developers, using the fltk-rs library is more straightforward than the C++ library. 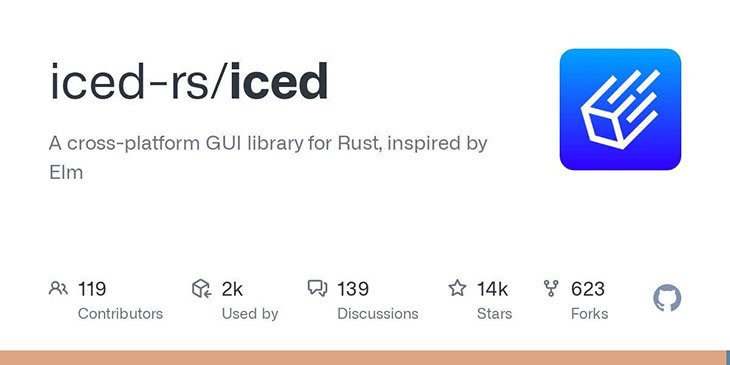 GUI applications built with the iced library can run on Windows, macOS, Linux, and the web (using the DOM) with a responsive layout. Conventionally, iced splits applications into four concepts:

You can easily get started using the Iced library for frontend web applications. The process is similar to building GUI applications and you can check out the iced documentation to learn more about the package.

The iced library is one of the most popular Rust libraries due to its versatility. Although the library is used in many projects, it’s pretty unstable and has a rapid development. You can resort to using older releases, as the master branch is constantly changing and might be expensive to use in production.

You can find projects for inspiration, code examples, and library implementations in this repository.

Like the GTK library, you can build cross-platform GUIs using relm. 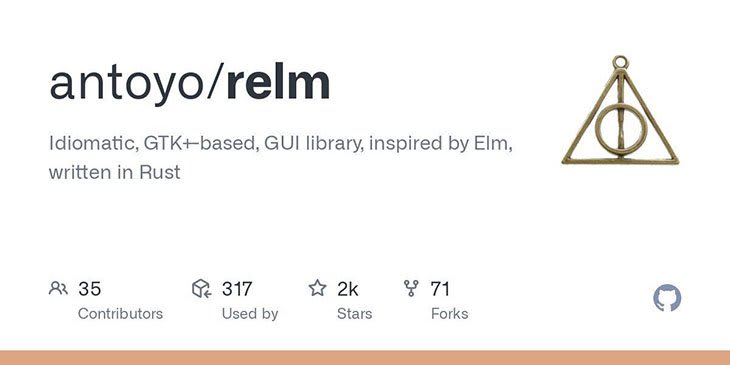 You’ll need to have experience using the GTK library to use relm and get the most out of the library.

To use relm, you need to add the gtk and relm libraries to your project's dependencies in your Cargo.toml file. You’ll also need to have the gtk library installed.

You also have to import the gtk crate alongside the relm crates.

The Rust community appreciates relm for the Elm-like experience that other Rust libraries, like Yew, Seed, and iced, provide. The relm library is in its beta stage, hasn’t been appropriately tested, and is changing rapidly. With this said, you may not want to use it in production just yet.

The Azul framework is a reactive GUI library for building desktop GUIs in Rust, C, and C++. It’s powered by WebRender and is a document object model, similar to HTML and CSS. Since Azul leverages WebRender, it provides features like gradients, box shadows, border styling, and CSS transforms. 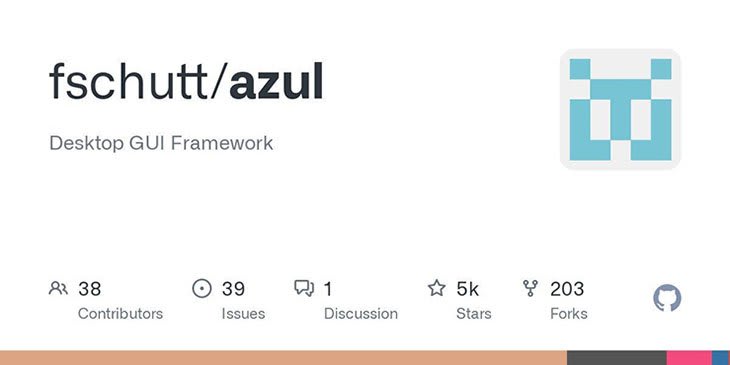 To get started using the Azul framework, add it to your project’s dependencies:

Then import the crates to your project and use them:

The Azul framework is well-documented to help you get started building GUIs.

The Azul framework takes a different approach to GUI development, and, so far, the framework has been used in more than 200 Rust projects. The Azul framework is functional, and, according to the documentation, you can use it in production. 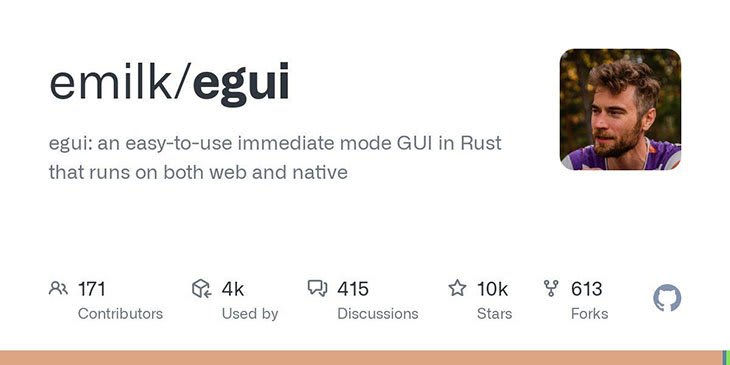 The egui library aims to provide a safe, responsive, friendly, and portable experience for building GUIs with no callbacks and minimal dependencies. Check out egui’s official documentation to learn how you can use it to make cross-platform GUIs.

The egui library is in active development, and, if you’re brave enough, you can use it in production. Specific parts of the egui library are ready and you can resort to older releases since newer ones are prone to breaking changes.

The GUI libraries discussed in this article have different features and functionalities. Here’s a comparison table between the GUI libraries to help you make choices and considerations for your next project!

The GUI libraries in the Rust ecosystem are mostly premature projects with a lot of good features.

As an example, the iced library is popular because it can run on Windows, Linux, macOS, and the web. It could be a good choice to use since your apps can share similarities and would be easier to maintain. The gtk-rs library is also lovely considering the library’s legacy. Additionally, you can use the relm library if you want to go the Elm way.

There are many other GUI libraries in the Rust ecosystem, and you can find a comprehensive list on Are We GUI Yet and LibHunt.

This tutorial taught you about popular GUI libraries in the Rust ecosystem, including gtk-rs to fltk-rs, iced, relm, Azul, and egui.

Hopefully, this tutorial has helped you with insights into choosing the GUI library for your next project!

Debugging Rust applications can be difficult, especially when users experience issues that are difficult to reproduce. If you’re interested in monitoring and tracking performance of your Rust apps, automatically surfacing errors, and tracking slow network requests and load time, try LogRocket.

LogRocket is like a DVR for web apps, recording literally everything that happens on your Rust app. Instead of guessing why problems happen, you can aggregate and report on what state your application was in when an issue occurred. LogRocket also monitors your app’s performance, reporting metrics like client CPU load, client memory usage, and more.

Modernize how you debug your Rust apps — start monitoring for free.

How To Add Multiple Language Support In ReactJS