In this article, we’ll explore the upcoming React Native version and the changes to the React Native architecture.

Let’s jump right into it.

A key architectural change coming to React Native is the new, native TurboModule system and the Fabric Renderer.

In the next sections, we’ll examine how these key architectural changes impact working with React Native applications by upgrading the Android Gradle plugin to be compatible with the latest nightly release version of React Native. We’ll specifically cover:

Preparing an Android app for the new React Native architecture

For our Android application, the following prerequisites must be met:

The taste of the pudding is in the eating, so with that little quip, let’s get our hands dirty by bootstrapping a new React Native application.

Once that is done, it’s time to focus on getting our application ready to receive the nightly release of the latest version of React Native.

Edit the settings.gradle file to include the following lines at the end of the file:

Adding the Gradle plugin to our build script:

And now, add the following code block at the top level:

In the dependencies section of the /android/app/build.gradle file, add the below code:

Once the application is upgraded to the latest open source release successfully, we can target the nightly release. The below command helps with that.

Install the latest version of react-native-codegen, which is a tool for automating the compatibility between JavaScript and native code at build time, instead of at runtime.

With our Android application up to date with the latest version of React Native, it’s time to explore the new renderer system: Fabric.

Improved communication between JavaScript and the native threads

In the current architecture, when a React Native application is run, the JavaScript code is bundled together into a package called JS Bundle, and the native code is kept separate. The JavaScript thread runs the JS Bundle, and the native/UI thread runs the native modules and handles UI rendering. The communication between the JS and native threads is enabled by a bridge, which sends data to the native threads after serializing as JSON. This bridge can only handle asynchronous communication.

With Fabric, logic is rendered in C++, which improves the interoperability between the host platforms. The Fabric renderer is implemented in C++, and the C++ core is shared among platforms, providing greater consistency and making React Native easier to adopt on new platforms.

Furthermore, the new architecture decouples the JavaScript interface from the engine, enabling the use of other JavaScript engines such as Hermes, V8, or Chakra.

A host view is a tree representation of views in the host platform (e.g., Android, iOS). 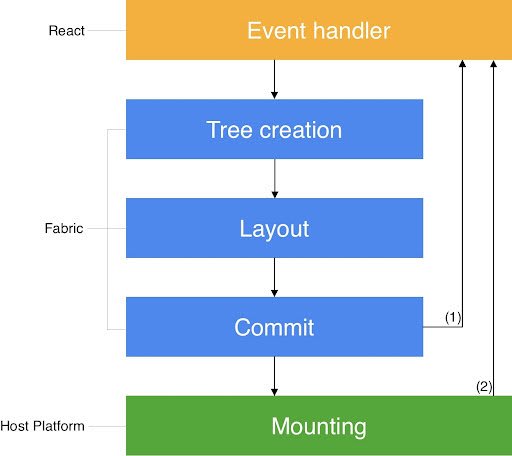 The improved interoperability between React Native and host views is enabled by the C++ core, which is shared among different host platforms and enables React Native to render React surfaces synchronously.

It wasn’t always this way — in the legacy React Native architecture, the layout was asynchronous, which led to a layout “jump” issue when embedding a React Native rendered view in a host view.

Data fetching in applications is now much more intuitive, thanks to the integration with React Suspense. Other new features available in React are now enabled in the Fabric renderer, such as the new Concurrent Features available in React 18. This includes the startTransition feature, which keeps the UI of our applications responsive during expensive state transitions.

Server-side rendering is also made easier with the new renderer.

The three phases of the Fabric render pipeline

Let’s look into each of them more closely.

In this phase, React executes product logic to create React element trees, which consist of React elements. A React Element is a plain JavaScript object that describes what should appear on the application screen.

The React element tree is used to render the React shadow tree in C++. The React Shadow Tree is created by the Fabric Renderer and consists of React shadow nodes, which are objects that represent the React host components that are to be mounted, and contains props that originate from JavaScript.

In the Render phase, as each React element is invoked, the renderer synchronously creates a React shadow node. Take note that this synchronous creation of a React shadow node only occurs for React host oomponents, and not for React composite components. When translated into a React Shadow Block, the above code would see the <View> translated into a ViewShadowNode object.

Below is a visual representation of the render phase:

The cross-platform layout engine Yoga is hugely important in handling operations that happen during the commit phase, which consists of two operations: layout calculation and tree promotion.

Once the calculation determines the amount of available space, the Tree Promotion operation promotes the new React shadow tree as the next tree to be mounted. This promotion represents the latest state of the React element tree.

This is the phase in which the React Shadow Tree (which contains the data from the layout calculation) is transformed into a host view tree with rendered pixels on the screen. The Fabric renderer creates a corresponding host view for each React shadow node and mounts it on screen.

The TurboModules system is an enhancement of Native Modules. In their current architecture, a table holds the module registry, and when the JavaScript code calls a specific native module, the indices of the module and the methods are passed to Java/ObjC, which invoke the specific methods.

A proposed solution to the eager initialization of Native packages is the use of the LazyReactPackage, but this is not an effective method because the annotation processor ReactModuleSpecProcessor does not run with Gradle; hence, the LazyReactPackage doesn’t work with the open source release.

This triggers the JSI function and a getModule function is invoked, which is defined for Java and ObjC, and returns a JSI object for the specific TurboModule (i.e., GeoLocation, FileStorage, DeviceInformation) that previously would have been initialized at app startup. This allows JavaScript code to load each module when it is required, instead of initializing them before the app is opened.

The React Native next version promises an improvement in startup time, and developer experience, with improved interoperability between all threads, a new web-like rendering system(Fabric). A key aspect that excites me about the new architecture, is the ability to easily build applications for Smart TVs.

LogRocket is a React Native monitoring solution that helps you reproduce issues instantly, prioritize bugs, and understand performance in your React Native apps.

LogRocket also helps you increase conversion rates and product usage by showing you exactly how users are interacting with your app. LogRocket's product analytics features surface the reasons why users don't complete a particular flow or don't adopt a new feature.

How to fix all build errors in react native(Android specific).