In this article I'd like to introduce the State Pattern and show how it can be implemented in TypeScript using the example of a toaster. Along the way, I will be touching upon the concept of Finite State Machines and illustrate how the state pattern can help us with their implementation.

The state pattern belongs to the behavioral design patterns and thus is used to solve problems of communication and delegation. Other patterns from the same group are Observer, Visitor and Command.

Basically, what the state pattern does is encapsulate an object's internal state in order to allow it to change its behavior. This pattern is very useful when dealing with an object that can take on a multitude of clear-cut states and needs to transition between these. The encapsulation allows us to focus on one particular state at a time, keeping its behavior coherently tied to a separate class without littering up the surrounding (context) class with entagled multi-state logic.

As such, the state pattern is a very good fit for so-called finite state machines.

A Finite State Machine (FSM) is any kind of device that can take on exactly one of a finite set of states (= specific behaviors) at a time and allows transitioning between such states due to external input.

Examples of finite state machines are traffic lights (with red state, orange state, green state), ATMs (with e.g. "Insert Card" state, "Enter PIN" state) and toasters (with e.g. idle state, toasting state). The latter one shall serve as a good example to illustrate how the state pattern could be implemented.

Given our defintion of a FSM above, we can capture the different states and transitions of a toaster with the help of a state diagram: 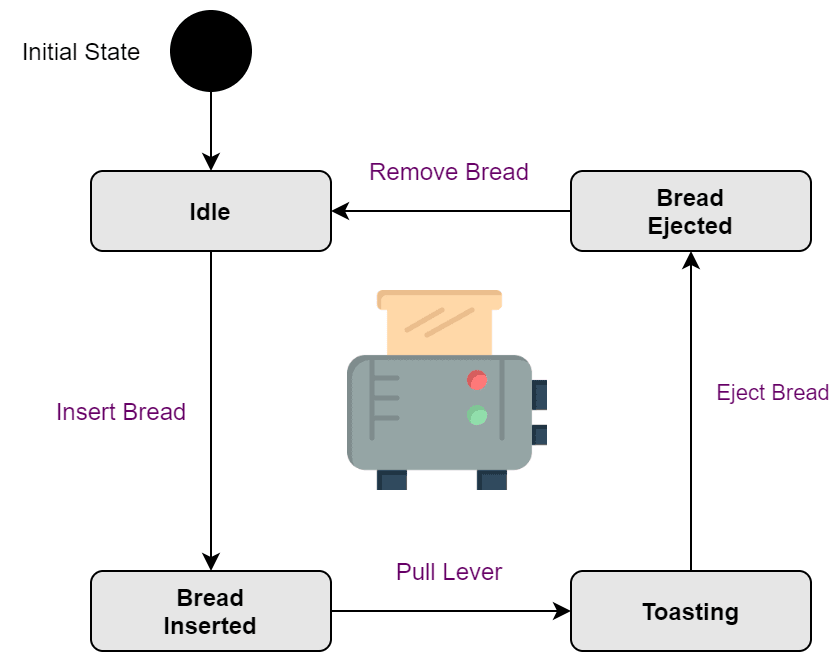 Also note that besides the transitions given there is no other way to transition between states. Especially, there is no way to directly transition from, for example, the Idle state into the Toasting state without going through the Bread Inserted state.

Implementing a Toaster in TypeScript

Let's start implementing our toaster example in TypeScript. We will begin with the definition of an interface collecting the device's operations:

You can see that the operations of a toaster exactly match its transitions. We will now implement the ToasterOperations inside the Toaster class.

So far there's nothing special going on here. Next, we need to handle the action logic once a transition method is called. If we did this directly inside the Toaster class, we would likely end up with a lot of opaque and incoherent spaghetti code. After all, the exact behavior triggered in each method entirely depends on the current state of the Toaster.

We really wouldn't want to litter the class with many if... then... else statements and according state logic. Instead, we will delegate the action logic that is to take place when a transition is called to the current Toaster's state itself. To do so, we will have to define different state classes (essentially encapsulating our behaviors using the state pattern) and have them implement our ToasterOperations interface.

We will begin with a base class ToasterState that other state classes will inherit from. Every distinct state is implemented in its own State class. The base implementation makes sure that any method called on these causes an Error to be thrown. After all, we don't want our Toaster to change state outside of our well-defined transitions.

However, if a method is called for which a transition does exist from the curren state, no error shall be thrown. Instead, the transition should take place. To do so, we will need to override the respective transition method in a concrete subclass and the method called shall return an instance of the new State the toaster transitions into.

For our initial Idle state we will implement the IdleState class and have it override our insertBread() method. When bread is inserted into the toaster, we will force it to transition into the Bread Inserted state, which is implemented in the BreadInsertedState class

Likewise, we will implement the rest of our states in their respective state classes.

Now, all that is left for us to do is allow our Toaster object to change its internal state. This will be done by referencing the current state the toaster is in through a local variable. A call to any of our transition methods on the Toaster object is then delegated to this current ToasterState instance.

Thus, we will modify our 'Toaster' class as follows:

We can see from the Toaster logic that each call to one of the transition methods will set the reference of the local _state variable to a new instance. Unless, of course, the transition called is currently not allowed, in which case an Error is thrown as per our ToasterState base class.

After each transition the new state is logged to the console for testing purposes.

This works very well. Let's see how the implementation behaves if we call a method that is currently now allowed:

That's it. Our toaster is working perfectly and we have managed to keep the state logic clean and focussed by applying the state pattern.

It would be a very easy task to extend the base transitions and states without having to worry about polluting our Toaster class. This task, though, I will happily leave to the reader as an exercise.

Get Started with Next.js, Typescript, Tailwind

How to Make a Gaming Website Using Html CSS JavaScript

Once suspended, lifelongthinker will not be able to comment or publish posts until their suspension is removed.

Once unsuspended, lifelongthinker will be able to comment and publish posts again.

Once unpublished, all posts by lifelongthinker will become hidden and only accessible to themselves.

If lifelongthinker is not suspended, they can still re-publish their posts from their dashboard.