Clues at the bottom. Also available as a download: 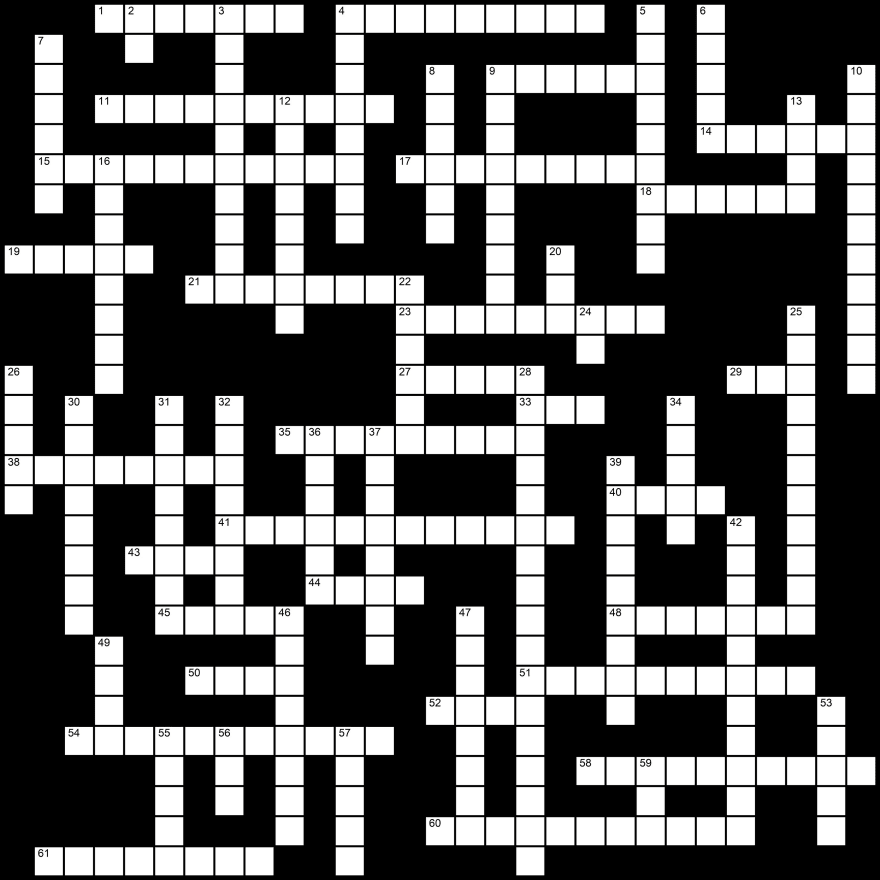 1 Opp. of Subscribe (7)
4 Design pattern for something that exists only once (9)
9 Call (6)
11 Programming style that centers around procedures (10)
14 This comes after the OO Analysis (6)
15 Programming style that describes the 'what' (11)
17 She or he who codes (9)
18 Sends requests to a server (6)
19 Template to instantiate objects from (5)
21 What OOP is supposed to be about (acc. to its inventor) (8)
23 When the code flow goes south at runtime, it raises one (9)
27 When a variable does not refer to a memory location, it looks for this (5)
29 It's always either, but never both (3)
33 Boolean binary operator that is true if, and only if, both operands are true (3)
35 The part that never changes during e.g. a loop (9)
38 Common consensus between a server and a client of an interface; should never be broken by either side (8)
40 Variables in an OOP dialect are usually declared with the help of one (4)
41 A program of tightly coupled code that becomes unwieldy (12)
43 Prefix for billion (4)
44 Control structure that is followed if the IF condition is false... (4)
45 A singular point in time when something relevant happens (5)
48 This is code if it breaks easily (7)
50 It's not just an island (4)
51 An abstrat data type that holds keys and values (10)
52 Prefix for thousand (4)
54 The part of a program that keeps data safe between sessions (11)
58 Programming style that embraces immutable types, prevents side effects and loves purity. (10)
60 A technique that trades space efficiency for time efficiency. (11)
61 Can have getters and setters, e.g. in C# (8)

2 User Experience, short (2)
3 Programming style that describes the "how" (10)
4 Design pattern that encapsulates various ways of doing things behind a single, interchangeable interface (8)
5 How classes and types are organized as a whole (9)
6 Set of five widely known OOP design principles, abbr. (5)
7 Design pattern: a single front-facing interface hiding several or mor complex internals (6)
8 Adding data to the end, always to the end (6)
9 This is where two implementations meet to communicate through a common understanding (9)
10 The part that instantiates a class (11)
12 A thing that checks if a small portion of your code works as expected, highly automated (8)
13 Abstract data type that represents a countable number of ordered values (4)
16 A value that never changes, ever (8)
20 Smallest meaningful unit (3)
22 The part that a client sends requests to (6)
24 Control structure to test the truthiness of an expression (2)
25 The overall idea of how fast a program runs or scales (11)
26 Denoted by { and } in Java and C-style languages (5)
28 A principle that makes the producer of a thing also its consumer (17)
30 A vast application that has no clear boundaries and is perceived as a giant one (8)
31 A programming concept that revolves around stimuli, change and how to respond to these (8)
32 A sytem in charge of storing data (8)
34 The extent of existence; also: the extent of work (5)
36 Half a "bite" (6)
37 The groundwork that precedes any good design (8)
39 A property of an entity, UML-wise (9)
42 Opposite of implementation (11)
46 The idea of exchanging one thing for another (8)
47 Named reference to a memory location (8)
49 Group of eight bits (4)
53 Abstract data type implementing LIFO (5)
55 This is what makes OOP so difficult (5)
56 Common relational database dialect (3)
57 Where we save our data nowadays so that we can access it from everywhere (5)
59 Boolean operator that inverts truthiness (3)

Once suspended, lifelongthinker will not be able to comment or publish posts until their suspension is removed.

Once unsuspended, lifelongthinker will be able to comment and publish posts again.

Once unpublished, all posts by lifelongthinker will become hidden and only accessible to themselves.

If lifelongthinker is not suspended, they can still re-publish their posts from their dashboard.

Once unpublished, this post will become invisible to the public and only accessible to Sebastian.

Thanks for keeping DEV Community safe. Here is what you can do to flag lifelongthinker:

Unflagging lifelongthinker will restore default visibility to their posts.