When it comes to data visualization, we have grown accustomed to the good old charts and maps. Seldomly do we pause and realize that these are merely shapes, serving as visual metaphors to help us digest information with more ease.

So I was delighted to find Shirley Wu's Film Flowers project, which uses flowers as a medium to visualize top summer blockbusters. 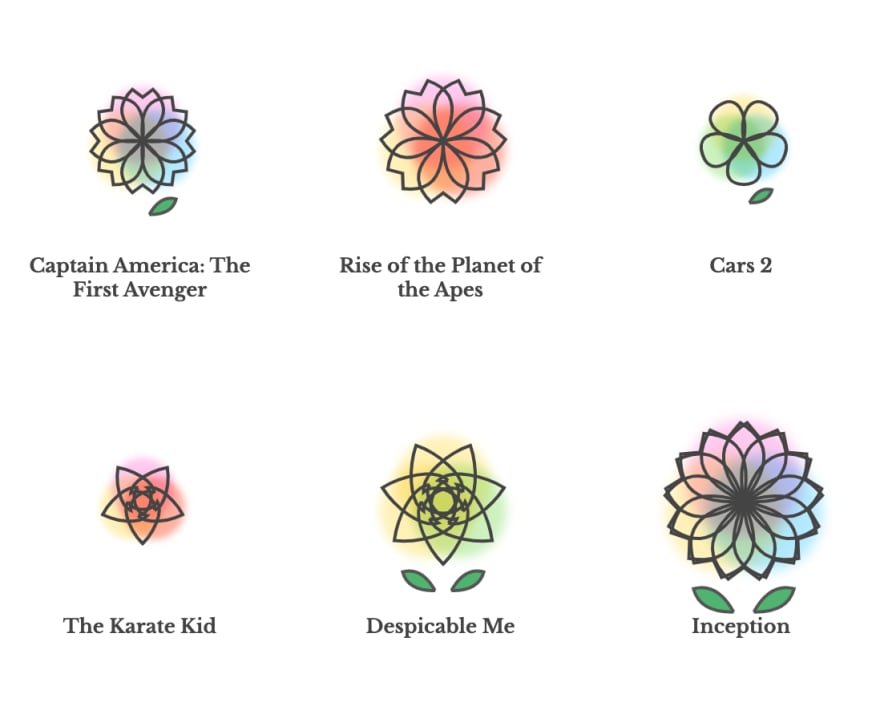 Granted, it does not seem as easily digestible as a simple chart would. From an artistic standpoint, though, it definitely stands out as an alternative approach to data visualization.

Inspired by the brilliance of combining data with aesthetics, I decided to use the same visual metaphor for my first d3 data visualization.

Popular baby names have been one of my favorite annual reports. Naturally, the most common way to visualize such data would be bar charts. 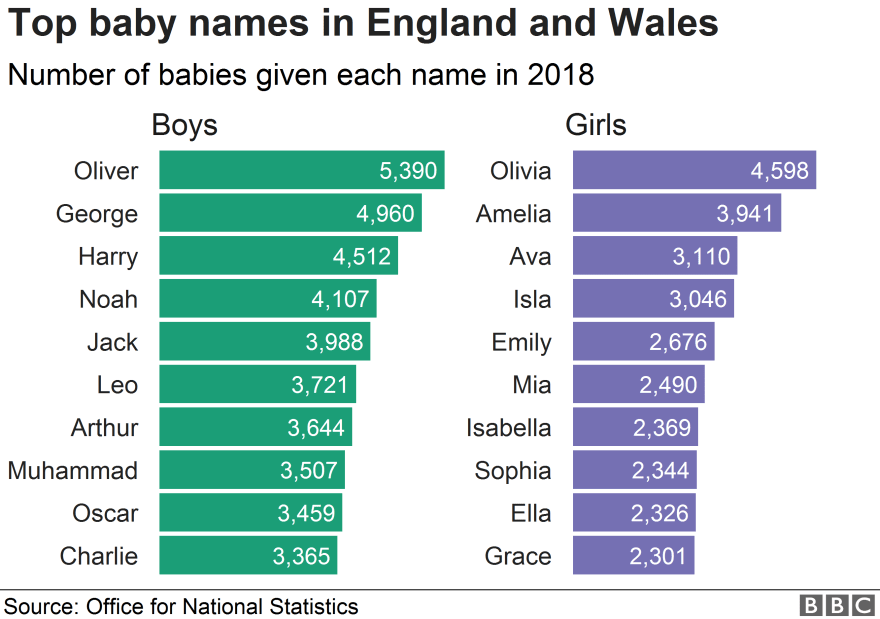 I also found this cool map, which leverages animated GIFs to display the most popular names over the years.

Similar to Film Flowers, in my Baby Name Blossoms project, I used petals to quantify data: the popularity of the names. 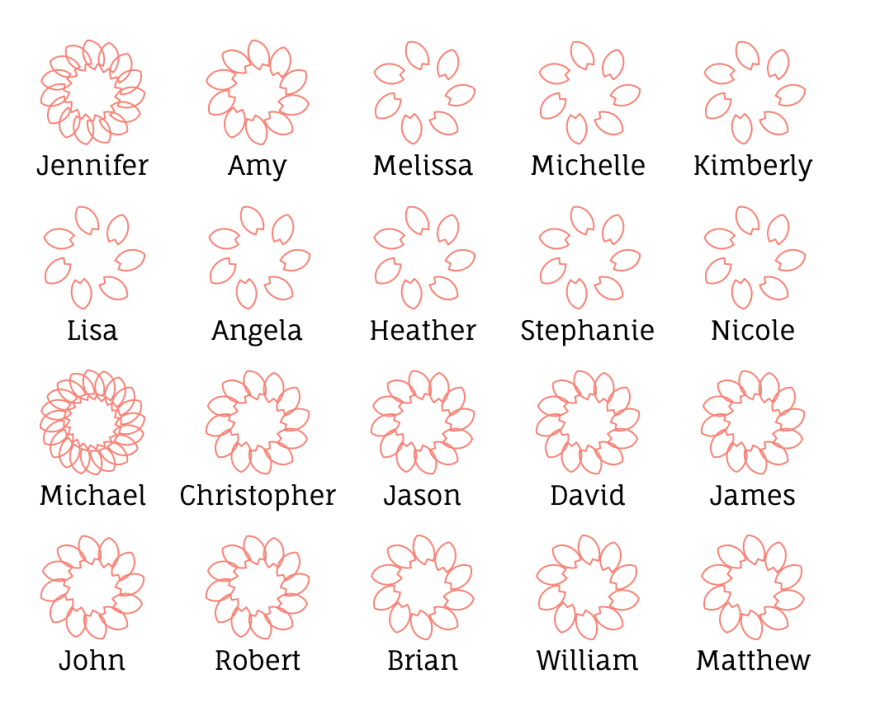 The magic behind this visualization is D3's quantize scale, which allowed me to transform popularity (d.count) into the number of petals (numPetalScale):

Since the data I grabbed were the top 10 names for both genders, the values share more similarity than, say, the values of Film Flowers' IMDb votes, making it a bit challenging to show big variations between the names.

So, how might we add features that distinguish between them? What makes each name unique? While asking myself the very question, I noticed that Film Flowers use colors to display different genres for each movie.

Perhaps I can use colors as well? How about taking the vowels and painting them accordingly?

Here, I used D3's ordinal scale to connect vowels with a range of colors:

Then, inside the function that converts each dataset into flower scale, I passed in a new object containing the vowels of each name:

And finally, I appended the circles(s) inside the flowers.

Thanks to the varying vowels in each name, now we can see more contrasts between individual names. The resulting visual effect was more than satisfactory :) 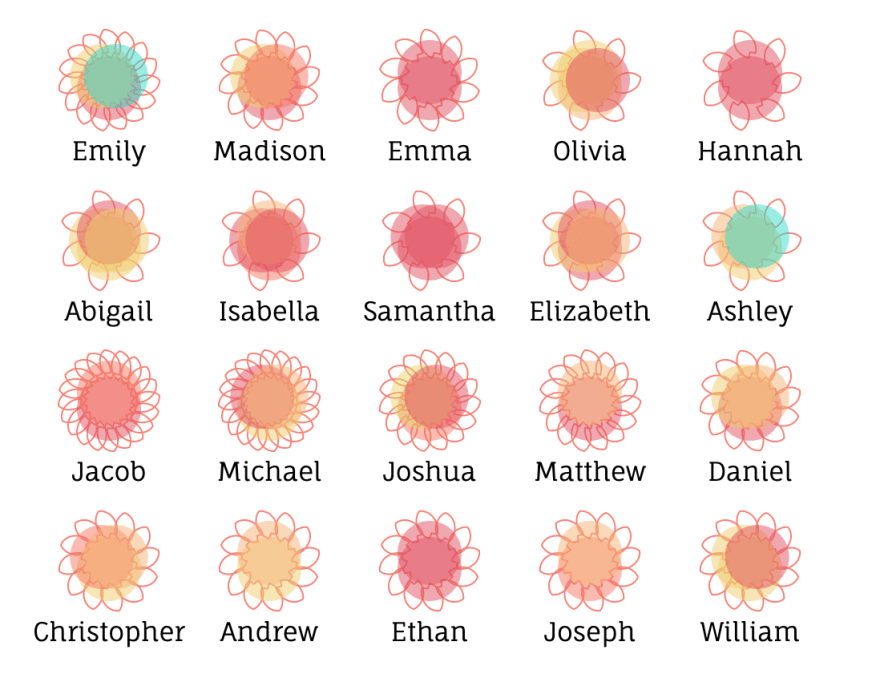 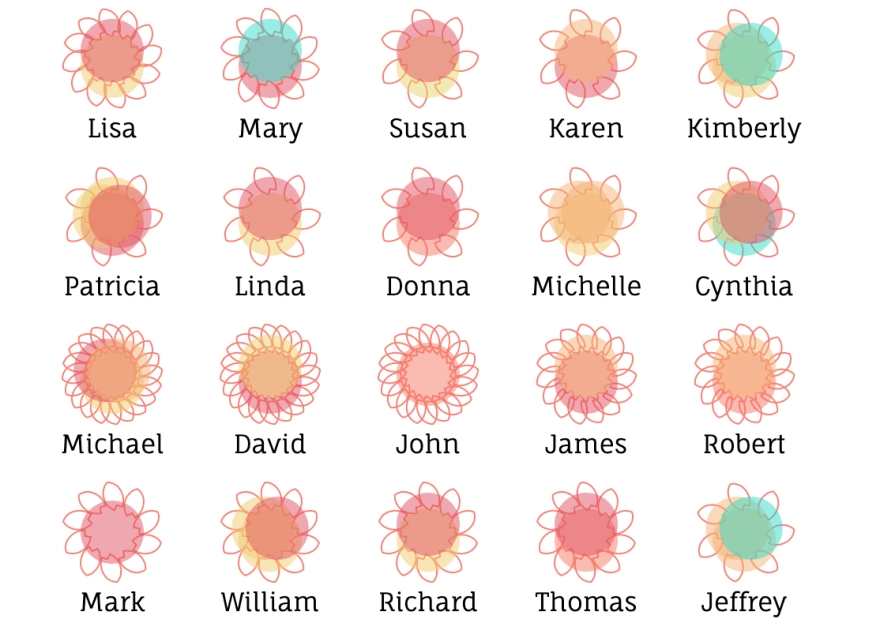 As magical as d3.js can be, there were plenty of unexpected side effects that turned my little 3-day project into a weeklong one.

The biggest unexpected challenge for me was layout.

As this is a React project, I also thought of leveraging any existing library, which led me to react-svg-flexbox. Unfortunately, it didn't deliver. To make matters worse, its babel-eslint version conflicted with the existing one in my project, causing the initial errors during deployment.

Looking at the Film Flowers, which actually laid out specific widths for each section, I hastily reverted back to using relative/absolute positioning for this project.

Nonetheless, I feel proud of the end product and will keep exploring new ways to visualize information with an artistic mind.

Special thanks to @jessesbyers for also inspiring me with her amazingly built COVID-19 World Tracker!

Your PRs make a difference 😍

We've got a great set of issues to modernize our JS management on the platform. Can you pitch in?

Annie Liao
Frontend Engineer with full-stack capabilities since 2020. Former Product Lead. Forever Designer.
3 Solid Video Tutorials to Get You Started on D3 Data Visualization
#javascript #webdev #codenewbie #dataviz
What I Learned from a 2-Hour Crash Course on GraphQL and TypeScript
#typescript #graphql #javascript #codenewbie
What You Can Achieve with 30 Days of JavaScript30 Challenge
#javascript #webdev #css

Once suspended, liaowow will not be able to comment or publish posts until their suspension is removed.

Once unsuspended, liaowow will be able to comment and publish posts again.

Once unpublished, all posts by liaowow will become hidden and only accessible to themselves.

If liaowow is not suspended, they can still re-publish their posts from their dashboard.

Once unpublished, this post will become invisible to the public and only accessible to Annie Liao.

Thanks for keeping DEV Community 👩‍💻👨‍💻 safe. Here is what you can do to flag liaowow:

Unflagging liaowow will restore default visibility to their posts.