The syntax is a layout of words, expression, and symbols.

Well, it's because an email address has its well-defined syntax. You need some combination of letters, numbers, potentially with underscores (_) or periods (.) in between, followed by an at the rate (@) symbol, followed by some websitedomain (company.com).

So, syntax in a programming language is much the same. They are some well-defined set of rules that allow you to create some piece of well-functioning software.

But, if you don't abide by the rules of a programming language or syntax, you'll get errors.

In the real world, a tool is something (usually a physical object) that helps you to get a certain job done promptly.

Well, this holds true with the programming world too. A tool in programming is some piece of software which when used with the code allows you to program faster.

There are probably tens of thousands, if not millions of different tools across all the programming languages.

Most crucial tool, considered by many, is an IDE, an Integrated Development Environment. An IDE is a software which will make your coding life so much easier. IDEs ensure that your files and folders are organized and give you a nice and clean way to view them.

Step 1) First you must download the Dev C++ on your Windows machine. http://www.bloodshed.net/dev/devcpp.html

Step 2) There are packages for different Operating Systems. 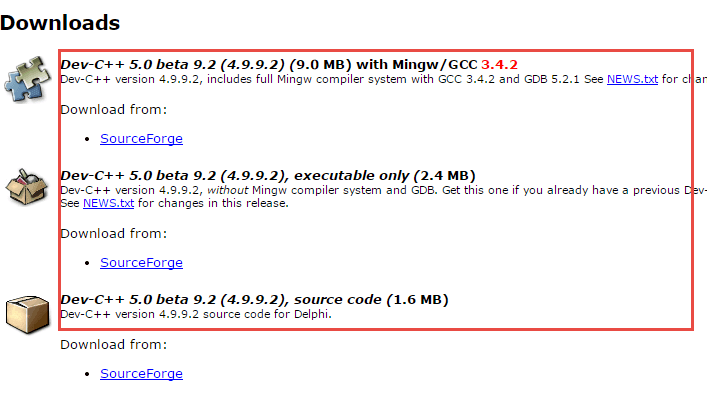 Step 4) This package will download .exe file for Windows that can be used to install on Windows 7/8/XP/Vista/10. 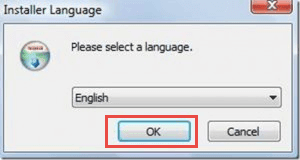 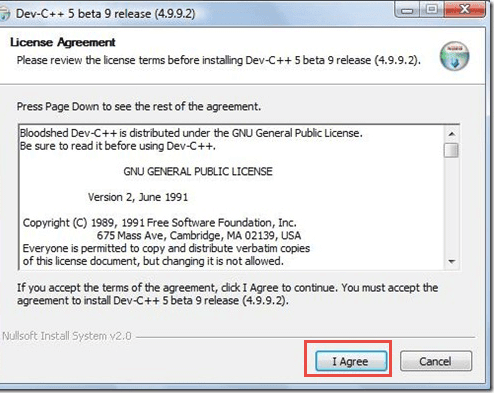 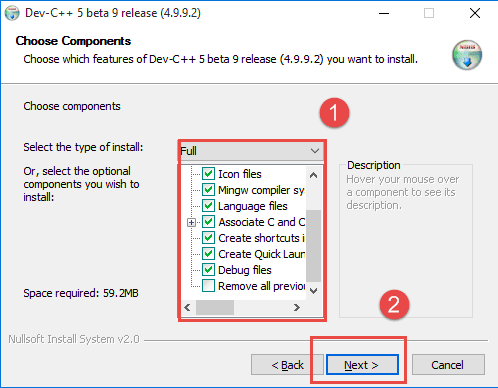 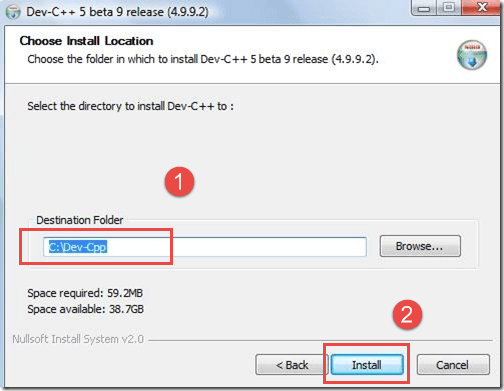 In the next screen, installation begins 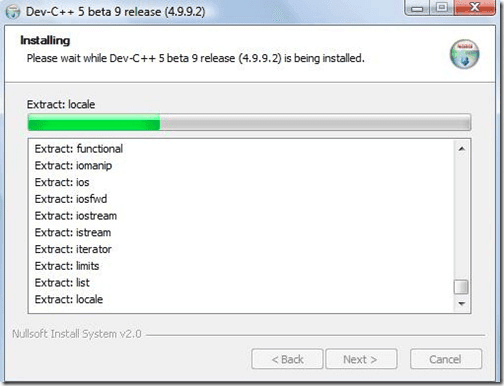 Now, Dev C++ is installed successfully on your Windows. Select " Run Dev C++" to run it and click on " Finish" button. 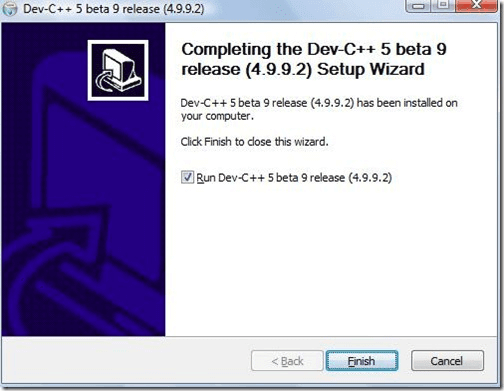 That's it! Now you are ready to compile your C or C++ programs with Dev C++ compiler.

If this is your first time running C++, you will see the following screen. 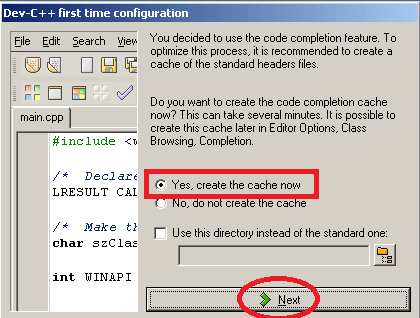 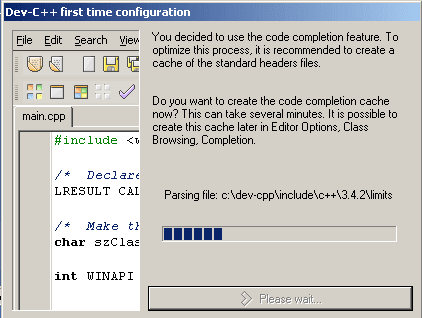 Step 2) Once the program opens, you need to create a new source file, so you can start writing your first program. To do this select File > New > Source File. The path is shown in the figure below.

This will open an area where you be able to type out your code.

Step 3) After that you can write the code as shown in the image below: 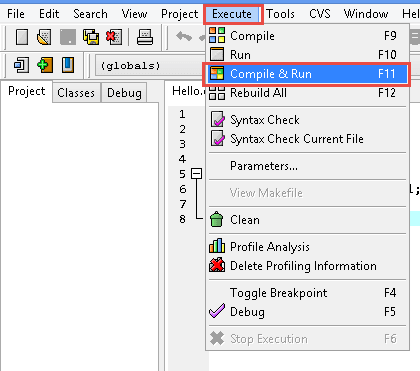 Step 5) Save the file 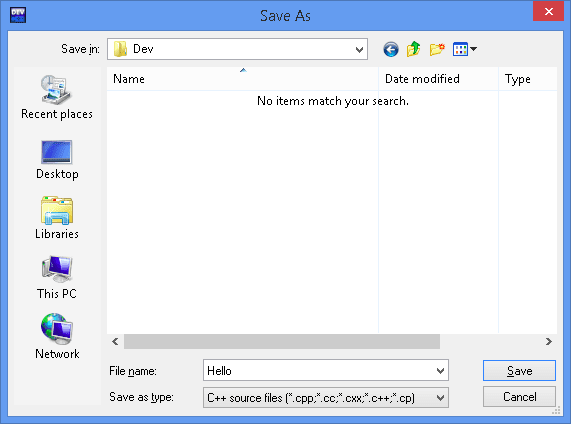 After saving you should a black screen outputting "Hello World."

C++ is a compiled language. The source code is compiled into object files. Object files are then combined by a linker creating an executable program. 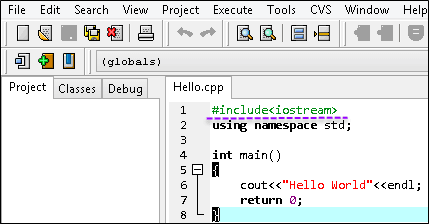 Code line 1: The first line is #include <iostream>. It instructs the compiler to include the standard stream I/O library. Without this header inclusion the expression would not compile

Don't worry about this, for the time being, simply note that the program must return an integer before the end. The curly braces, { and }, contain the code within a function. The program terminates, at the end of the main function denoted by }

Code line 6: The operator << writes its second argument onto its first. In this

(Note: A string literal is a sequence of characters surrounded by double quotes. endl inserts a newline character on the same line)

The void type has no associated values with it and can be used in only a few circumstances. It is most commonly as the return type of functions that do not return a value.

The Integral types may be signed or unsigned.

Signed Type: They represent negative or positive numbers (including zero). In a signed type, the range must be evenly divided between +ve and -ve values. Thus, an 8-bit signed char will hold values from –127 through 127.

Unsigned Type: In an unsigned type, all values are >= 0. An 8-bit unsigned char can contain 0 through 255 (both inclusive).

A variable provides us with a named storage capability. It allows programmer to manipulate data as per the need. Every variable in C++ has a type. The variable type helps to determine the size and layout of the variable's memory map, the range of values that can be stored within that memory, and the set of operations that can be applied to it.

Identifiers can be composed of some letters, digits, and the underscore character or some combination of them. No limit is imposed on name length.

The C++ language has reserved some names for its use. 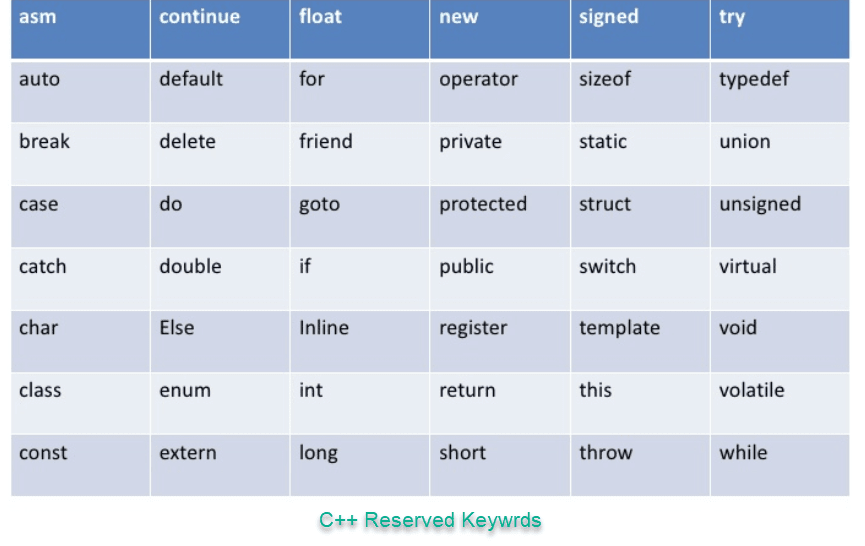 There are many accepted conventions for naming variables in different programming languages. Following these conventions can improve the readability of the program.

A declaration of a variable makes a name known to the program in the scope in which it is defined. Example:

Suppose there is a variable buffsize which states the number of inputs to be taken from the user. Here, we don't want to change the value of buffsize throughout the program. We want to define a variable whose value we know should not change.

In such case, use the keyword const

This defines bufSize as a constant. Any attempt to assign to or change bufSize gives an error.

Here, we can't change the value of a const object after we create it, it has to be mandatory be declared and initialized. Otherwise compiler throws an error.

Scope of a Variable

A scope is a span of a program where a variable has a meaning. Mostly the same name can be used to refer to different entities within different scopes. Variables are visible from the point where they are declared until the end of the scope in which their declaration appears.

This program defines 3 names, viz, main, sum, and val. It uses the namespace name std, along with two other names from that namespace—cout and endl.

The scope can contain other scopes. The contained (or nested) scope is referred to as an inner scope. The containing scope is the outer scope.

Output #1 appears before the local definition of reused. Thus, this output

statement is the one which uses the name reused that is defined in global scope. This statement outputs

Output #2 occurs after the local definition of reused. It is now in scope. Therefore, this second output statement simply uses the local object named reused rather than global one and outputs

A variable of one type can be converted into another. It is known as "Type Conversion." Let's see the rules for converting different variables types:

Assigning of non-bool to a bool variable yields false if the value is 0 and true otherwise.

Assigning a floating-point value to a variable of int type yields the value which is truncated. The value that is stored is the part before the decimal point.

Assigning of an int value to a variable of float type results in the fractional part becoming zero. Precision is usually lost if the integer has more bits than the floating variable can accommodate.

If we try to assign an out of range value to a variable of unsigned type, the result is the remainder of the value %(modulo)

For example, an 8-bit unsigned char type can hold values from 0 through 255, inclusive. Assigning a value outside this range will result in the compiler assigning the remainder of that value modulo 256. Therefore, by the logic above, assignment of –1 to an 8-bit unsigned char gives that object the value 255.

If we try to assign an out-of-range value to an object of signed type, the result is unpredictable. It is undefined. The program might appear to work on the outside, or it might crash, or it might produce garbage values.

The compiler applies these same type of conversions when we use a value of one type where a value of other type is expected.

Expressions that mix signed and unsigned can yield surprising and wrong results when the signed value is negative. As discussed above signed values are automatically converted to unsigned.

If x is int and y are unsigned, then the value of this expression depends on how many bits an integer has on the compiling machine. On our machine, this expression yields 4294967295.

Registers variables are faster to access compared to memory variables. So, variables which are frequently used in a C++ program can be put in registers using register keyword. The register keyword tells the compiler to store the given variable in a register. It's compiler's choice whether to put it in a register or not. Generally, compilers themselves do various optimizations which include putting some of the variables in the register. There is no limit on the number of register variables in a C++ program. But the compiler may not store the variable in a register. This is because register memory is very limited and is most generally used by the OS.

Comments are the portions of the code ignored by the compiler. It allows the programmer to make notes in the relevant areas of the source code/program. Comments come either in block form or single lines. The program comments are explanatory statements. It can be included in the C++ code which helps anyone reading its source code. All programming languages allow some form of comments. C++ supports both single-line and multi-line comments.

Some characters, such as backspace and control characters, have no visible image. Such characters are known as non-printable characters. Other characters (single and double quotation marks, question mark, and backslash) have special meaning in the many programming languages.

We use an escape sequence as if it were a single character:

We can use pre-defined escape sequences, as we are using any other character.

What is a Good Path to Learn Programming

How to create a production Docker image