I like to collect funny images and use them in chats, so I decided to build a Chrome extension to ease my life. Functionality is next:

Here is a video demonstration

Apparently, we need some DB to store this info, also we need some storage to upload images there. So I've decided to kill two birds with one stone and store images and DB as JSON in some file hosting service (Dropbox, OneDrive, GoogleDrive etc).

After digging in these service's docs I realized that most of them require a public URL to redirect a user after authorization success, and this URL will contain a token to work with their API. It didn't work for me, because extensions live on their browser protocol chrome-extension:// which is obviously not supported.

And then I've found out that Dropbox has another way of authentication for users.
We just need to open the next URL
https://www.dropbox.com/oauth2/authorize?response_type=code&client_id={{YOUR_APP_KEY}}

It will ask a user to create an isolated folder for your app and in the end, opens the page with a special code in it.

We need to take this code and send it to Dropbox API with your app secret code. In return, you get a token to work with this newly created folder.

Extracting part is pretty easy, all we need is to inject a special script to this page. To do that, we need to define it in the manifest.json file:

Here is the whole flow on the diagram: 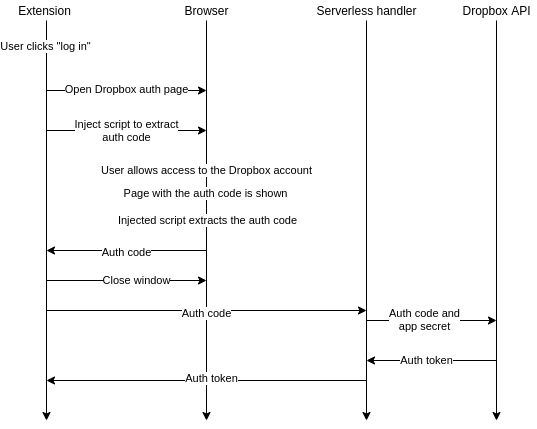 Amazing, now we can upload anything we need.

For those who don't know, an extension doesn't have a single runtime as most web applications. It has:

I like to use Redux(Redux Toolkit) and this runtime separation is a problem because we don't have a single instance of the store. Yes, we can initialize the store in one place(background script) and then send an event to all runtimes when it changes, but this would lead to full render on each store change because it'd be a new state object all the time. Also, we would be able to dispatch actions only from one place.

So I decided to make a dirty trick. Here is the logic:

Also, on each state change, the background script uploads it to the Dropbox 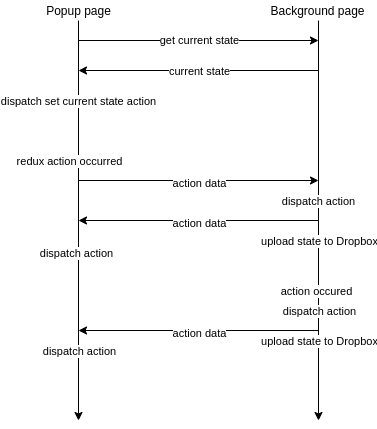 Here is the code of described logic:

As was mentioned, background script uploads state to Dropbox on each change and there is a high chance of data loss if a user uses two computers simultaneously. It is because we download a state from Dropbox only on the first run, then we upload it to the Dropbox when it changes. To solve this, we generate a unique id for each user session. Then, when a user uploads state to the Dropbox, we also upload the small file called "session.json" with the session id. Before each state upload, we download this session file and compare ID with the current one, if they are different, we download a state from the Dropbox and merge it with the current state, and then upload. This whole flow makes extension slow(on adding images and tags, not for search), so it is disabled by default and a user should enable it in the settings page.

There is the diagram of the flow: 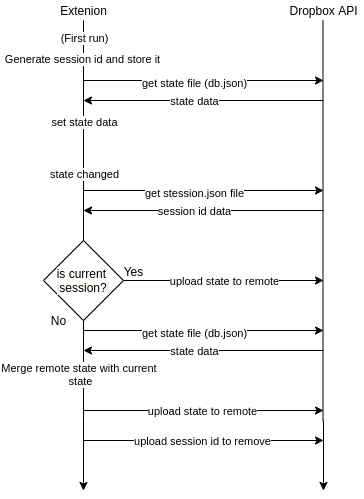 This is my first article ever, hope it will help somebody, would appreciate any feedback. Cheers

What Code Editor Are You Using?

All you need to know about Typescript Decorators

Bohdan
Frontend Security
#javascript #webdev #security
PHP 8 Is here! A step in the right direction?
#php #webdev #laravel #discuss
Why I don't like to use Styled-Components
#discuss #css #javascript