With the ever-growing jungle that is the web, the need for web design standards only grows with it. Gaining more awareness and a better understanding over accessibility is tantamount.

My club, KPMD, or Korean pop Music and Dance, is one of the K-pop communities and organizations on Penn State University. Inherently, we are not a dance club, but we aren't not a dance club? We have two essential bodies that come together to make KPMD. We have our discussion-side leaning more on culture, talk, and simple socializing. On the other hand we have the option for people to dance, no experience is required and most people do it for fun as a way to exercise.

With that intro out of the way, I was curious after learning about a11y, web.dev, WAVE, and other web performance, accessibility, SEO, and more:

Here were the audit results: 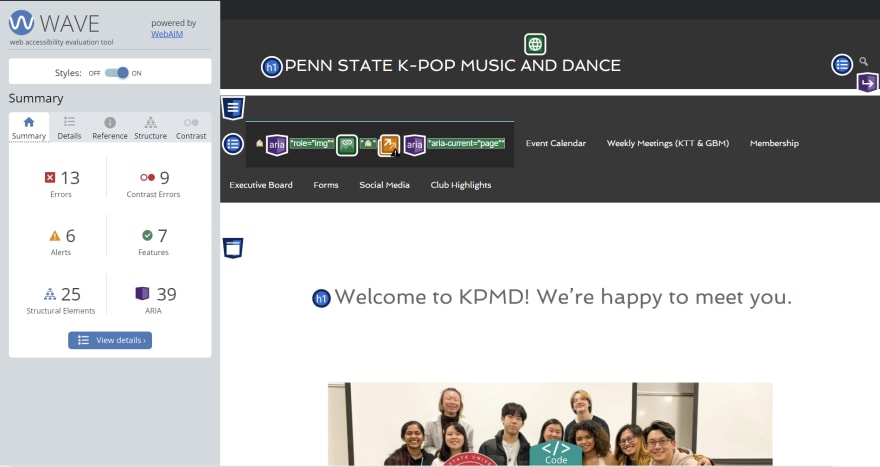 On initial impression, I didn't really understand why anyone would implement any of the reported errors when viewing Lighthouse and web.dev. WAVE showed off direct point outs on the website itself though it may be hard to orient content when modified like so. Another worry was that inherently this the foundation for sites.psu.edu utilizing WordPress may have had a lot of dependencies to begin with. So I chose to double check their home site's results as well. 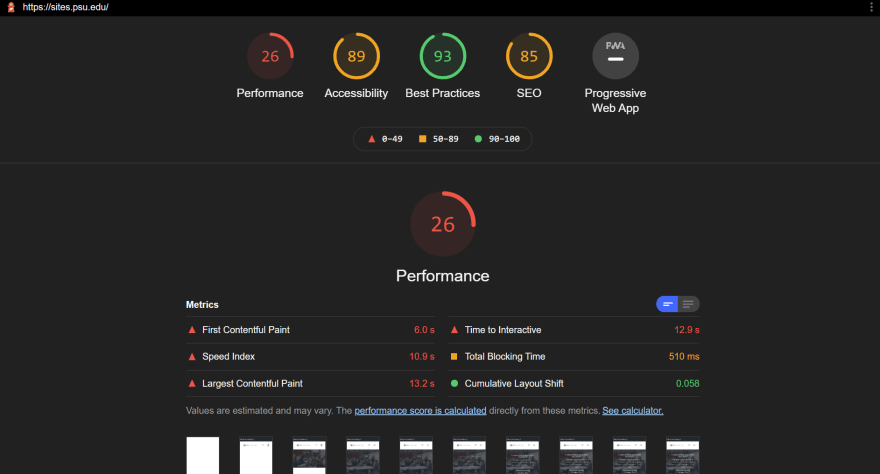 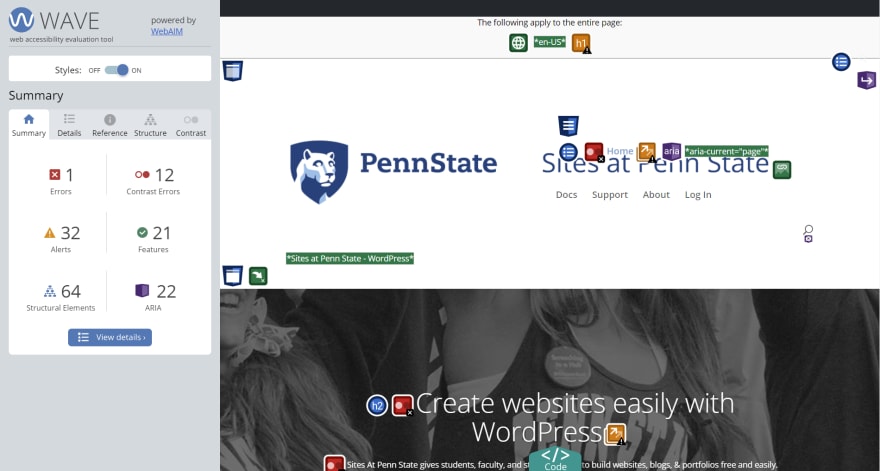 While the accessibility score is higher, the performance score is somehow lower.

While some pieces of the audit may seem self intuitive, it's not always good to assume things about stuff you're not an expert in. So in the end I tried going in more depth research over a few elements. Some of the ones I chose to delve into were:

Regardless the ability to being open to updates and aware whether change is needed are both tantamount to future web standards that can help cater to those of differing levels of necessary accessibility.

Total Blocking Time
This is essentially used to indicate how long the site loads until interactivity and responsiveness are available to the user. It is measured by when the main thread is blocked by "Long Tasks" or basically whenever a task runs longer than 50 milliseconds. The main thread being where the browser loads and paints events. For both the root psu.edu site as well as KPMD's, both had rather large TBTs, all exceeding 500ms, and the rest being between 700-900ms. Usability-wise this is rather low, with the average TBT of sites according to web.dev being <300ms.

Eliminate render-blocking resources
What Total Blocking Time was was what I thought Render Blocking Resources were at first. Render blocking resources are apparently URLs blocking the first paint of your page (according to web.dev). Basically while it may affect responsiveness, it is more geared toward just the first contentful paint.

ARIA (Accessible Rich Internet Applications)
I was most interested in this because it was completely unknown and related to accessibility. Plus the things around it I also didn't know. Other acronyms that popped up were WAI (Web Accessibility Initiative) and WCAG (Web Content Accessibility Guidelines) which are all inter-related. From just googling it, the gist I got was it being a standard by W3C and assistance for web developers to create accessible website. It helps with alternate navigation and user interaction as well as accessibility on tech like screen readers providing descriptions for elements on a web page.

Overall the sites.psu.edu and my own club KPMD's websites were both lacking and had room for improvement granted most college kids tend to make sites based on artistic choices rather than accessibility I believe. Accessibility and performance in relation to each other are definitely important to consider.

Regarding that, an interesting read was one where someone attempted to maintain a perfect accessibility score on Lighthouse while absolutely messing up accessibility in reality. Basically they wanted to point out to not always rely or become dependent on only tools like such as discrepancies and things good in theory can still happen (though this is hyper specific haha). Here's the link! https://www.matuzo.at/blog/building-the-most-inaccessible-site-possible-with-a-perfect-lighthouse-score/

Creating a Docker image for a Ruby on Rails application!

What is Static Site Generation of Next.js?

Care
UX / UI and Coding Beginner learning and discovering balance in a ever-growing world of code and its affects.
Gitty Gitty Up!
#beginners #github #git
Throwing Myself Into the Vue Pool and Unceremoniously Flailing
#vue #beginners