A few weeks ago I wrote that I will be teaching designers frontend development at a university this year.

I asked for your opinions on how to teach frontend development in 2020, and the answers were good but also fairly widespread.

I think, the problem was mostly, that frontend development is a wide field and becoming a proficient developer in any field requires months, if not years of time investment.

I invested that time and IT and development are now my main source of income, but I also think that anyone could use some dev skills even if they don't make it their main job.

These people already spend most of their time getting good at the core skills, they don't have years to become a full-blown developer.

So my idea was to define a skill set for The Minimal Viable Developer.

By no means is this a finished idea, I'm just throwing this out to get your opinions in hopes to improve it.

These MVDs could come in different flavors and the one I'll start with is the Frontend MVD.

An FMVD should be able to create frontend software that has prototype quality. Something that works and could be improved upon by a regular frontend developer or by the FMVD if they become more skilled in the future. So it shouldn't be perfect, but it should also not be a complete disaster of copy-pasted StackOverflow answers :D

I thought a stripped-down version of the Frontend Developer Roadmap would be a good start.

To fire up the discussion: What would you throw out?

I think, all the non-purple stuff could go right away, which removes almost half of that roadmap.

Sometimes they list multiple points with purple marks, I don't know if it's better to use the simplest solution here (for example Parcel instead of Webpack) or the most mainstream (npm instead of yarn), etc.

Would also be worth considering if some CSS things could be left out. Wouldn't Grid and Flexbox be enough for starters?

So this is what my version would look like: 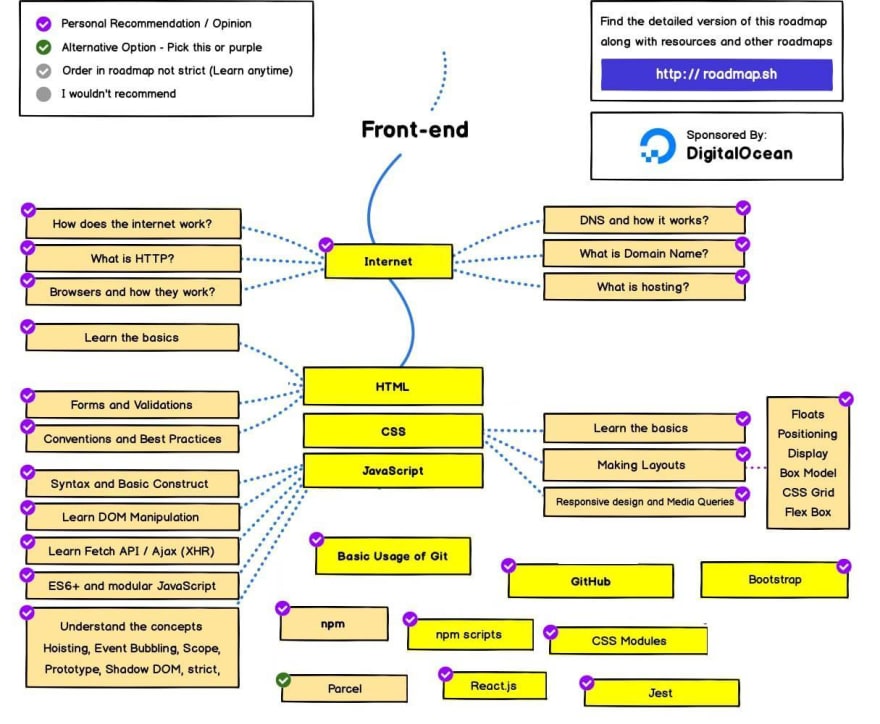 On the other hand: What would you add?

This roadmap is rather technology-heavy, some concepts (DRY, KISS, SOLID) could be a good idea.

Anyway, I'm curious what you think :)

Is it time we quit WhatsApp?

Which Linux distro is most stable for daily use?

K
Tech That Gets You a Fullstack Job
#fullstack #beginners #job
What would you teach a frontend beginner in 2020?
#discuss #beginners
Getting started with CI/CD on AWS
#aws #devops #beginners