We're back parsing large strings again, with the aim today of pulling numbers out of a long JSON string. Here's Part 1: 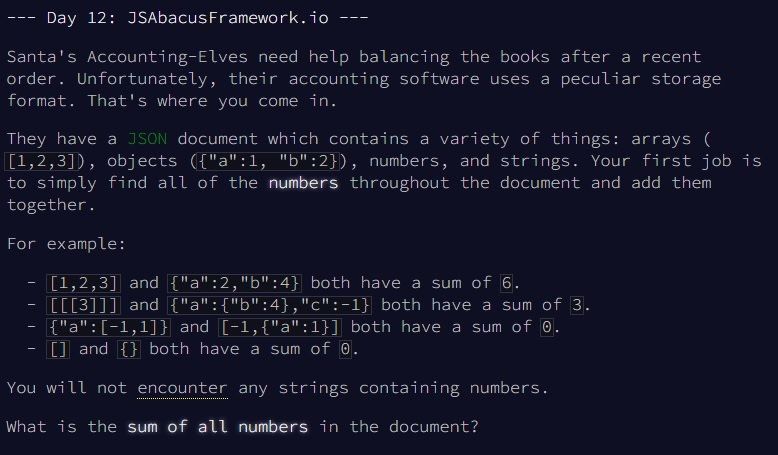 And here's a small(!) sample of the puzzle input:

It seems really wasteful to step through the string when there's a perfectly good alternative in RegEx, regardless of how terrible at regular expressions I am. So it's back to RegExr with a sample of the puzzle input. Fortunately, the RegEx is fairly straightforward:

This roughly translates to "zero or more minuses, followed by one or more digits", which you can see explained here (with some sample input).

This means that the solution to Part 1 can be done in a single line of code, though I'm not claiming this as golfing:

Part 2 involves us actually having to parse the data:

Thankfully, Python provides a JSON parser as part of its standard library, and it has no trouble loading the puzzle input into a JSON document:

In simplest terms, this turns the data into a structured set of nodes, which we can travel through using recursion. Any nodes containing the banned word 'red' can be ignored, and any numbers get added to the sum:

This runs surprisingly quickly, and I don't remember seeing any surprising variations in the Reddit megathread. However, despite my best efforts, I have had to resort to regular expressions enough times to think I should spend a bit of time learning it properly. Also, maybe I should put together a little post of handy bits of RegEx, especially where they might be helpful in Advent of Code? Let me know what you think.

Top 5 Websites to Find Your Next Python Job