Day 5 is one of those puzzles that has you processing strings as efficiently as you can manage. I love Python's ability to slice strings, it's a real strength of the language. Here's Part 1 of the puzzle: 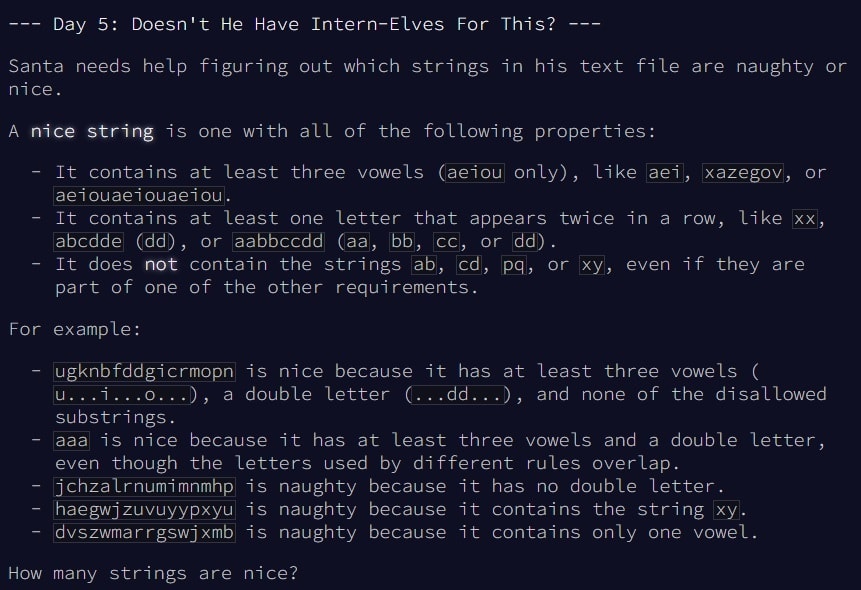 So there are three things we need to do to decide whether a string is 'nice':

In Python, a string is essentially a list of characters, and lists are iterable. That's why we can write code like for c in 'hello':. Iterables can be used in the map() function, with each item having a function applied to it, for example str.count() as in my example below:

The return value of map() is also an iterable, which means it can be sent to the sum() function. This gives us a Pythonic (finally!) way of counting the vowels in a string.

I wrote this part as a simple look through the string, with a two character sliding window. I saw lots of solutions in the megathread that used regular expressions to find doubled letters, such as re.search(r'([a-z])\1', s) and re.search(r'(.)\1', s). All this confirmed for me is that regular expressions are another topic to go on my 'learn more about Python' list.

I eventually found regular expression approaches to this test too (e.g. re.search(r'ab|cd|pq|xy', s)), but used a loop to code this test:

Of course, in hindsight I could have written the code in exactly the same way as I checked for vowels:

Either way works, and combining the three tests I was able to move on to Part 2: 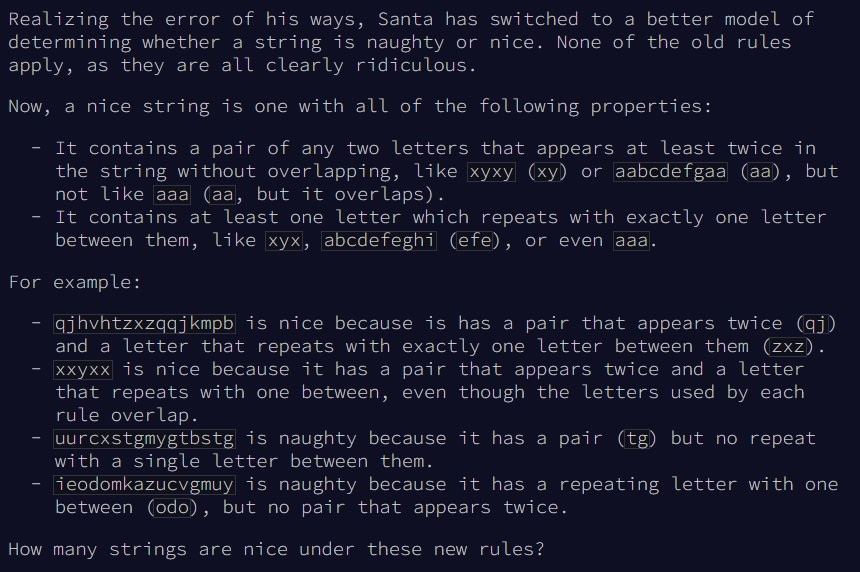 It's unusual for the puzzles to change so abruptly, but here we are. Now strings only have to pass two tests, but they are slightly more complicated than those in Part 1:

Really wish I was more familiar with regular expressions! I could have used something like re.search(r'(.)(.).*\1\2', s) as many cleverer Pythonistas did, but ended up writing the following:

This uses a sliding window to consider two characters at a time, and then look in the rest of the string to see if it appears again. So for the string mqzxvvskslbxvyjt we look for:

Another sliding window, this time with three characters in the window:

Inevitably there are some one-liners in the megathread. Here's both parts solved in a line of code each, in a comment by Reddit user Stactic:

Unlike a lot of golfing code, this remains pretty readable, even to a regex novice like me!

On to Day 6, and some flashing lights!