I struggled to find an elegant solution to today's puzzle, but several other people did. First of all, here's Part 1: 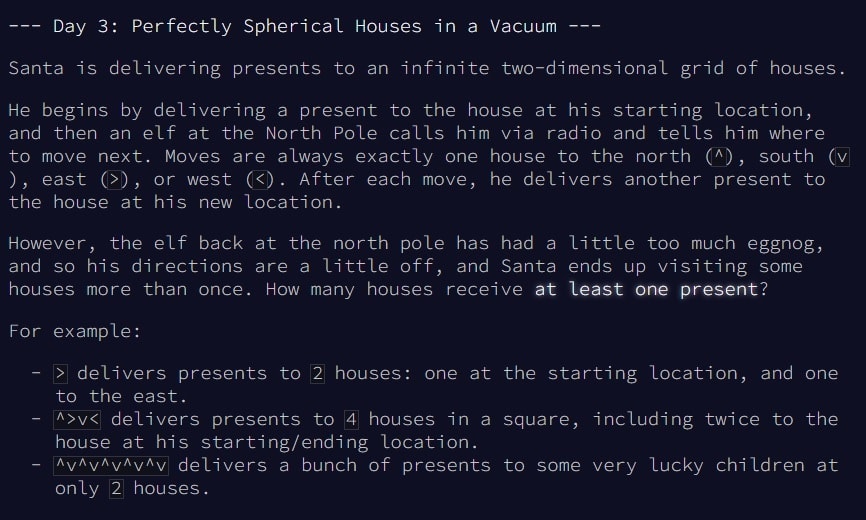 We are asked to keep track of Santa as he moves north, east, south, and west, and recording how many places he visits. Thinking ahead to Part 2, I was imagining we'd have to find which place he visited the most, but Eric Wastl had something else in mind today.

My approach was to create a dict, keyed on a tuple of Santa's x and y coordinates. I actually recorded how many times he visited each occasion because, who knows what's in Part 2?! My code to record his movements looks a bit clumsy compared to some of the more Pythonic solutions other people came up with, but it worked. It started off inline with the main code, but I eventually put it in its own function because of Part 2:

A lot of code, but hopefully fairly readable, and it gets the job done, so we're on to Part 2!

Instead of keeping count of Santa's visits, we're introduced to a new character! Now we're also tracking Santa's robot, which explains how generic calc_move() is in my code. Using the same two functions above, my Part 2 solution looks like this:

I've seen several examples use modulo division to decide who is moving, which would allow the code to track as many characters as you wanted, but a boolean worked well enough for two characters.

Looking at other people's solutions in the megathread, I discovered that a dict could be used to move characters with only one line of code:

In this code, the current coordinates are passed in as a tuple p, with the direction to move being the character c. This character is the key to four items in a dictionary, which are simultaneously looked up, and the coordinates updated accordingly. I found this really elegant; elegance seems to one of the keys to what coder find truly Pythonic.

I also found this Python one-liner, which I presume works (I haven't tested it), and despite staring at it and drinking numerous cups of coffee, I still can't understand what it's doing. Impressive, nevertheless!

I haven't used the set object to do anything other than ensure collections only contain one of each item*, so I can only guess what set.union() is doing here. Likewise, although I've seen zip() used in a lot of Python code, I've not yet dug into the documentation to find out what it really does.

(* Obviously, as it turned out, I didn't need to keep count of how many times each location was visited, so I could have used a set() for houses and saved a bit of time.)

A Deep Dive into Connecting FastAPI with SingleStore.