One of the holy grails of the modern application is to build a scalable application. It is not one of the topics of the moment; it is THE hot topic.

For example, the cloud. The main selling point is to build a scalable application.

And about the programming languages, practically every language is sell as scalable as if it is a built-in feature.

However, it is a lie.

In general, the election of the language has little or not related to the scalability.

What it must be scalable is the information, not the system

For example NodeJS. NodeJS is selling as scalable. Of course, it is scalable because it is not touching or considering the information.

We are not Google.

First, if we want to achieve the level of Google, then we must thing completely differently. However, it is not our case and it's pointless to try to mimic the model of Google (unless we want to own thousand of datacenters).

The easy way to scale a system

Q: But but, we are not talking about costs.
A: It's all about costs!.

Usually, the Web Server has a high output, it uses a few resources and practically it works as a channel between the UI and the web server. However, the real bottleneck is the database.

In this case, the Web Server allows up to 20 concurrent users (per second), but the database allows up to 3. So, the maximum concurrency is 3. 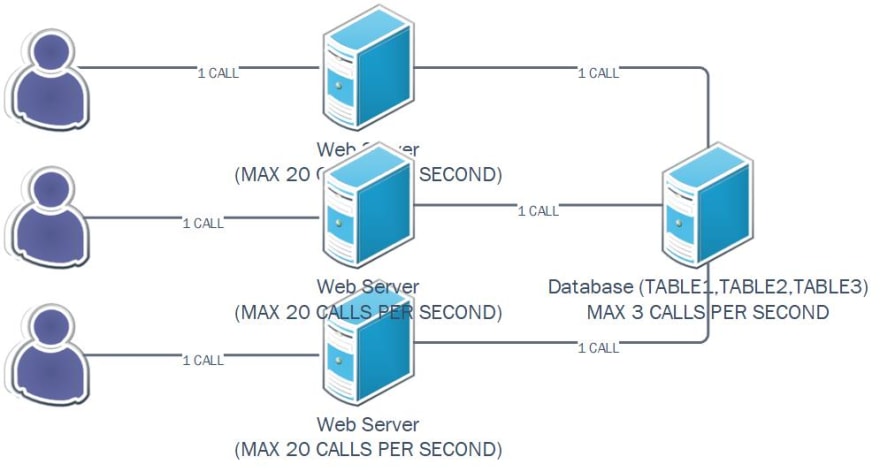 Multiple Web server. It changes nothing (but increases the costs of the server x 3). Why?. It is because the database is still the bottleneck.

We could gain something by reducing the bandwidth, for example using CDN but commonly, this model is not practical but a false illusion of scalability.
In this case, we achieve a concurrency of 3 calls per second or maybe we could earn a bit more (for bandwidth), maybe 4 calls per second. 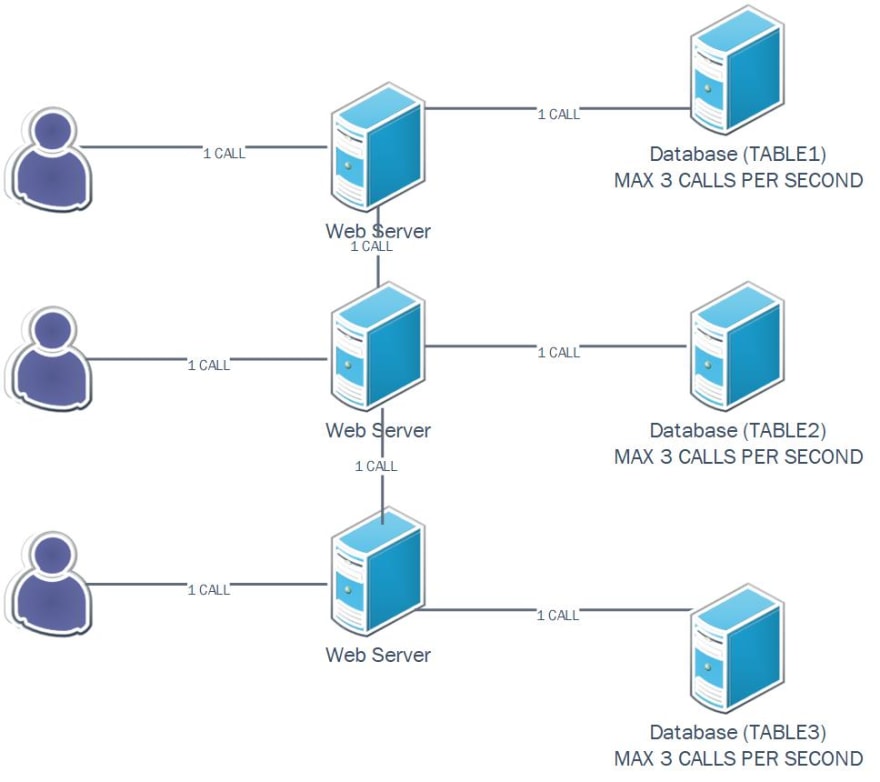 The concept of Microservice is to have a small server that does a single task. For example, we have a server that connects to a database that owns a single table: TABLE1.

But what if we need to access all 3 tables at the same time?.

In this case, we won nothing with Microservice. In fact, it could be slower than a single model because we need to coordinate the information. Every (relational) database does a superb job joining tables.

Microservice works to distribute the design and implementation of the project but for scalability.

In this case, we achieve a concurrency of 3 calls per second (for the worst case).

But, this model has the highest cost. It requires 3 web server and 3 databases, we also require a connection between each server.

Note: Some companies have big pockets to spend on servers but in developers. Still, each server requires maintenance. If we use the cloud, serverless, microservice, docker and such, we still need to maintain the system and it costs per machine, so if we have 6 machines, then maintenance cost is x6. It's not rare to think that cloud is maintenance free. Funny.

Scalability has little or it's not even related to a specific language. One of the true scalable language/frameworks is Java Enterprise (Java EE), it has some built-in scalable features since a decade ago (clustering, shared sessions, shared database connection), features that other "scalable-ready-languages" don't have, but it is optional and we could build a scalable system even using Visual Basic.

Some languages could beat benchmarks by using asynchronous processes but those benchmarks are not real if they don't test the whole pipeline, including the access to the database.

Jorge Castro
You are free to believe in whatever you want to, me too. So, stop preaching your religion, politics, or belief. Do you have facts? Then I will listen. Do you have a personal belief? Sorry but no.
Sessions or Cookies?
#codenewbie #womenintech #productivity #webdev
CSS Flexbox Cheat Sheet 🔥
#webdev #css #beginners #productivity
June 10th, 2021: What did you learn this week?
#weeklylearn #discuss #weeklyretro
Forem Open with the Forem app